When Nazis walked the streets of Seattle 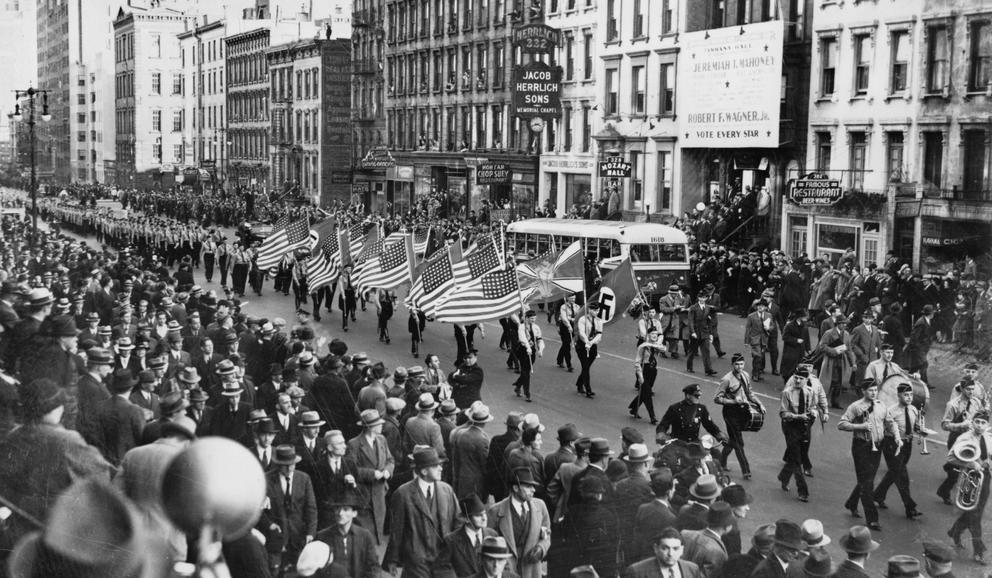 “There is no organized mistreatment of Jews in Germany.”

In 1936, a heroic University of Washington crew team took on the Germans at the Olympics in Berlin. But the “Boys in the Boat” were not the only Seattleites in Adolph Hitler’s capital city for the games. There were others who were soaking up Joseph Goebbels' propaganda and later bragged that they’d been close enough in the Olympic throngs to see the Fuhrer’s “kind blue eyes.”

Much has been written about the Ku Klux Klan in the Northwest in the 1920s. There were also the fascist Silver Shirts of the 1930s, and the neo-Nazis from the 1980s — home-grown racists and anti-Semites who operated here, but were largely self-invented far-right fringe groups. During the 1930s, however, Seattle was home to, and a key pass-through point for, real Nazis who were sent here to win hearts and minds as a part of a strategy for world domination.

They sought to make friends, to find and cultivate potential supporters in the German American community. Seattle was a strategically important city for both potential allies and enemies. It was a major port connected by trade all over the globe, and especially close to Germany’s ally Japan. It had Boeing, which was building state-of-the-art aircraft and, by the mid-1930s, war planes like the new B-17 “Flying Fortress.” The city also had a significant population of people of Northern European heritage, people with a personal and business interest in seeing a stable Europe and a healthy Germany.

The result: chapters of Seattle's history that clash with the city’s progressive self-image — chapters that have largely been forgotten in a collective act of moving on. Yet these events help us understand our history, our international connections, our relationship to race, immigration, and civil liberties. This is the first in a series of stories that attempts to jumpstart our remembering.

It began with diplomats. In the 1920s, Germany opened a consular office here, an outpost of the German consulate in San Francisco, which represented the interests of Germans in the Western United States, from Utah to the West Coast, from the Mexican border to Alaska.

The first consul in Seattle to represent Hitler’s Germany, which came to power in 1933, was a gentleman of the old school — described as more of a Hindenburg man than one of Hitler’s — an experienced diplomat named Dr. Walther Reinhardt. Reinhardt had been posted all over the world, in Montevideo, Rio De Janeiro, New York, Chicago, Zurich and Latvia. He was a steady presence with an academic air: He gave lectures on Goethe and in 1932 won a major award, the Strassburger prize, juried by Albert Einstein, Thomas Mann and Jakob Wasserman, for a biography he’d written of George Washington. By 1932, he was considered the distinguished dean of the local diplomatic corps.

When Hitler became German Chancellor, Reinhardt tried to give some dignity to the new Nazi regime, which wanted to project an aura of progressive dynamism and efficiency, an image of a government that was pulling Germany out of the post-war dumps and, perhaps, could teach the Depression-era United States a thing or two. Reinhardt downplayed Hitler’s ambitions and said Germany’s new boss only wanted peace. Looking back in 1941, after Germany’s diplomats had been expelled from the U.S. prior to the war, the Seattle Times reflected that during Reinhardt’s years in Seattle he “was feted at teas, musicales, cocktail parties and other affairs by Seattle residents.”

One of his main tasks was to soft-pedal and deny any anti-Jewish agenda of the Third Reich. It was not as if Hitler’s anti-Semitism was unknown — he’d made his views perfectly clear in Mein Kampf, published in the mid-1920s. The Nazi rise to power was fraught with terrifying acts of brutality and terrorism. Still, these were often denied or attributed to Communist propaganda.

An infamous editorial in the Seattle Times on March 8, 1933, headlined “No Persecution,” suggests how mainstream minds were being molded exactly along the lines of the propaganda Reinhardt and his colleagues sought to promote. “There is no organized mistreatment of Jews in Germany,” the editorial began, citing assurances the U.S had received from the German ambassador. “The apprehensions and fears so feverishly propagated in this and other countries are officially reported groundless.”

The editorial went on to blame Communists, saying “every channel of Communistic propaganda is being employed to discredit the German government and embarrass its plans. The most careful scrutiny of all authentic and dependable news reports from Germany has failed to reveal any evidence that persecution of Jews was being tolerated, much less encouraged by the government.” The Times declared that tales of persecution were “an evil rumor,” concluding that “there has been no racial persecution in Germany and will be none.”

Philip Tworoger, a local lawyer and writer for Seattle’s Jewish Transcript newspaper, was incredulous over the Times’ cluelessness. “To say Hitler would not allow any organized persecution of the Jews indicates that the writer of the editorial is woefully ignorant of the history of German politics,” Tworoger wrote a rebuttal to the editorial that was published in April 1933. “Had he taken the trouble to inform himself he would have readily discovered from the files of The Seattle Times during the last six years that the Nazi[s], as the National Socialists are called, are organized on the principle of anti-Semitism. One of the plans of their ‘platform’… is their opposition to Jews, either to drive them out of Germany entirely or disenfranchise them and deprive them of their rights as citizens.”

Alongside Tworoger’s letter, the Times — then under the direction of editor and publisher Clarence Blethen — decided to double down on its view that there was nothing German Jews should worry about, saying that it was too early to judge the Nazi regime. “The Times has expressed no high degree of confidence in Mr. Hitler; his rule is new and experimental, and the time to pass judgment has not arrived,” the editors wrote. “[T]hat it would deliberately arouse the hostility of the civilized world by ruthless persecution and outrage, such as Mr. Tworoger tries to depict, is incredible — just now unthinkable.”

Unthinkable? By April, 1933, when those words appeared in the Times, the Reichstag had been burned, Hitler had assumed dictatorial powers, Dachau concentration camp had been built, and the Nazis had staged a boycott of Jewish businesses. In fact, on the very day the Times declared state sanctioned anti-Semitism too be “unthinkable,” Jews were officially barred from public jobs, including teaching in schools and universities. These acts were followed that year by the creation of the Gestapo, the establishment of legal race definitions for Jews and “Aryans,” the banning Jews from land ownership, and stripping Polish Jews of citizenship, among other things. That was just Year One of the 1,000-year Reich.

So whose propaganda was the Seattle Times listening to? It tracked exactly the denials of Reich representative Reinhardt. In December, the German consul wrote a letter to the Jewish Transcript claiming that the newspaper was misrepresenting events in Germany. The paper had accused Reinhardt of “spreading anti-Semitism in speeches, and … using his association with leading Seattleites to whisper anti-Jewish falsehoods.”

But in his attempt to deny these points, Reinhardt unintentionally proved them to be true. In his letter to the Transcript, he related that he had visited Germany that summer with two unnamed American friends and that their impression was “that in no country in Europe they found less anti-Semitism than in Germany and that at no time in Germany less anti-Semitism was prevailing than now.” He went on to explain that restrictions placed on Jews were for their own good and had generated a more friendly attitude toward them by the German people. “Restrictions — yes! But no persecution, no atrocities,” said the toast of Seattle’s foreign service.

No longer whispering anti-Jewish falsehoods, Reinhardt was getting them published in a Jewish newspaper.

Next: How the Nazis charmed Seattle