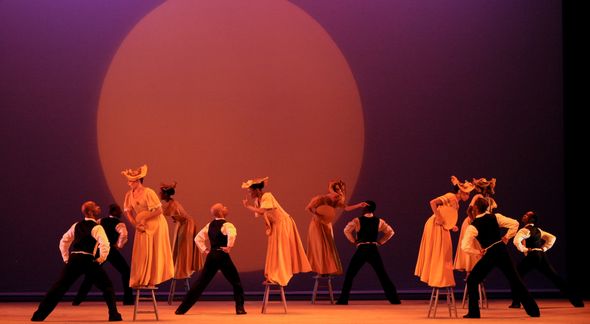 For 58 years, the Alvin Ailey American Dance Theater (AAADT) has been reflecting and preserving the African American experience by telling and re-telling its stories through theatrical dance. The company’s namesake, Alvin Ailey, who died in 1989, was one of the foremost American modern dance choreographers of his generation.

His company, now led by 43-year-old choreographer and former dancer Robert Battle, was in Seattle earlier this month on a 20-stop national tour. AAADT performed three shows at The Paramount, offering a sequence of powerful performances that shed light on the past and present state of African American dance and culture.

“So much of what Alvin Ailey wanted to do was to educate without being preachy,” Battle said in an interview before performances.

So what did Ailey’s latest successor want 21st century Americans to know? What narratives is the company putting in the literal spotlight today?

I'll start at the beginning  or rather, the end. The piece that closed all three shows was familiar to longtime Ailey fans — his 1960 masterwork, “Revelations.” Its scenery and costumes evokes the rural South, where Ailey grew up in the 1930s and '40s.  The dance, divided into three sections, is choreographed to blues, spiritual and gospel music. At first, during “Pilgrim of Sorrow,” the dancers wear muted tones. The colors brighten to blue and white in “Take Me to the Water.” The piece closes joyously. Men and women dancing together in couples, the men showing off.

“Revelations” is seemingly forever relevant — it is America’s history danced and American dance history. In Seattle, the piece produced an encore each night and got the audience to its feet, clapping, swaying and singing along.

“Revelations” also happens to have played a pivotal role in Battle’s career, when, as a high school student in Miami, he first saw the company perform. Sitting in the audience, he saw “dancers of all shades of brown,” a biographer writes in a children’s book released last year. Until then, he had wondered if he could be a world-famous black ballet dancer, but at that moment, he could finally see himself in the dance.

Along with a few Ailey classics, the company also performed recent additions to the company’s repertory, including Matthew Rushing’s 2014 piece, “Odetta.” Rushing is dancer, choreographer and rehearsal director for the company — its talented triple threat. Battle and Rushing hold the dual responsibility of creating new work, while also closely maintaining Ailey’s legacy as leaders within the company.

In “Odetta,” Rushing has created a stirring portrait of folk singer Odetta Gordon, both a performer and a civil rights activist who died in 2008. When President Clinton honored her with the National Medal of Arts and Humanities, he said, “She has sung for freedom with Dr. King, lifted the pride of millions of children, shaped the careers of young performers like Joan Baez, Bob Dylan and Tracey Chapman. She is the reigning queen of American folk music, reminding us all that songs have the power to change the heart and change the world.”

Battle guided Rushing in choosing Odetta as the subject for a dance. “One of my friends produced her last album, but I didn’t know a whole lot about her,”Battle said. Then, while attending a memorial service for her with his friend at New York City’s Riverside Memorial Church, “All of these people, like Harry Belafonte and Pete Seeger, got up to talk about her. I thought this would make a great dance.”

“Odetta” puts both her activist and performer personas in the spotlight. Dancer Hope Boykin, who plays the role, begins the piece standing tall on a pedestal, her supporters encircling her while a recording of “This Little Light of Mine” plays. Nine songs later, it ends with Odetta supported in their arms, revealing how very much she was loved by her supporters and fans and will continue to be through her songs.

Perhaps the most personal piece in the show, and the one that revealed the most about Battle’s own experience, was “Awakening.” The dance is Battle’s first piece for AAADT since he took over as artistic director. In the piece, Battle wanted to create a landscape reflective of the music he chose, the propulsive and thunderous third movement to contemporary American composer John Mackey’s symphony “Wine-Dark Sea.”

The landscape that Battle created is stark – literally black and white. Twelve dancers, dressed in loose-fitting, billowy white costumes, glide in and out of a dimly-lit stage in straight lines. Part of the way into the piece, a male figure breaks off from the ensemble. (This dancer strongly suggests Battle in his new role.) Later, the group moves in concert -- not always in unison, but harmoniously.

The subtext of “Awakening” is partially autobiographical. “It’s about leadership emerging out of the womb of community,” Battle told me. He was a guest choreographer and artist-in-residence for AAADT before Judith Jamison, the company’s veteran leader who succeeded Ailey, handpicked him for the artistic director role. So, it’s no surprise that Battle chose really powerful music for this piece. Through “Awakening,” he is recognizing and capturing a defining and triumphant moment in his life – when he was chosen to succeed the person who inspired his path as a dancer, Alvin Ailey.

Filling Ailey’s shoes is a tall order. What Battle demonstrated in Seattle is that he is going to stick with the formula that has worked for the company for almost 60 years. AAADT will continue to present work that reveals how dance and music can help transcend struggle and pain (“Revelations,” “Odetta”) and tell stories – Odetta’s, Battle’s own, and the South in the early 20th century. Skirt lengths and costumes may change, but the reasons for dancing are the same.

It’s through performance that the audience can feel joy, hope and wonder. As Spectrum Dance Theater’s Donald Byrd, who has choreographed for AAADT, pointed out to me, that’s what the spirituals that form the basis of “Revelations” are about, and the same could be said for Odetta’s songs. “That’s why black people go to church on Sunday,” Byrd said.

Though AAADT has now left Seattle continuing on its national tour, it will have an ongoing presence in this area for years to come. Seattle Theatre Group and AAADT are launching a 6-week AileyCamp for 11-14 year-olds this summer.

In his opening remarks two weeks ago, Battle mentioned that the 48 campers, selected by application to participate in the first AileyCamp here, were in the audience. They had the chance to see Ailey’s masterwork, “Revelations,” as Battle did so many years ago, getting to know the choreographer who said “dance is for everybody” and who has given so many the gift of dance.