At Mariners games, it's baseballs and bomb trains 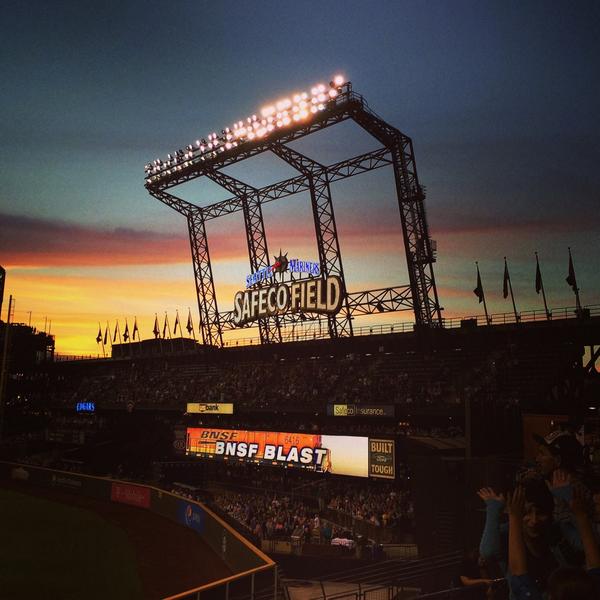 Celebrating homers as a "BNSF Blast."

I’ve been a fan of the Mariners since the Edgar Martinez Grand Salami heyday, but for the last decade or so they’ve been “paper bag over your head” bad. From 2010-13, Seattleites watched as our hitters crumbled into the worst offensive team since Tricky Dick was President.

But Seattle now has slugger Nelson Cruz, and an (almost) respectable cast behind him. Cruz is belting homers like he has a personal vendetta against baseballs being on the field. I imagine he spends his mornings writing his memoir, Baseballs Deserve It, A Life’s Mission, as he eats a leather ball stitch to stitch.

Normally, this level of disturbed athleticism would make me “Santa brought me a bike!” levels of excited, but not anymore.

Why, you ask? Because again this season, every Mariners home run at Safeco Field is a "BNSF BLAST," brought to you by the Burlington Northern Santa Fe Railroad. It’s a sponsorship deal that has inspired a mix of face-palm worthy irony and terrified anxiety.

Burlington Northern Santa Fe is the nation’s largest mover of crude oil. Over the past year, the company hauled 55 million barrels of crude through Washington State. Oil train derailments have had a tendency to, well, blast into colossal fireballs of destruction. Just ask the surviving citizens of Lac-Mégantic, Quebec, where an exploding oil train leveled 10 blocks of the small town, killing 47 people.

Shipments of crude have dwindled in recent months, but just last fall, in a primetime investigative piece for KOMO 4 News, Jeff Burnside confirmed that oil trains run right past the Seattle Stadium during games on a consistent basis.

Here's an amateur video taken from the stadium last April of one of these so-called "bomb trains" chugging right past Safeco Field on its way through downtown Seattle:

Oil trains pose such high risks that the Washington Fire Chiefs wrote a letter last year to BNSF taking the company to task for failing to release its worst-case  accident scenarios and emergency response plans.

So at home games, can I sit in the stands, happily drinking my $11 beer? No, now I have to endure every majestic trot around the bases, reminded that oil trains put every M’s fan at risk of being caught in a different kind of BNSF BLAST.

Note: BNSF is a sponsor of Crosscut's news coverage. A full list of sponsors can be found here.

Nick Abraham is an energy and money in politics fellow with the Sightline Institute and editor of Oil Check Northwest.