Have we learned anything from Bertha's last sinkhole? 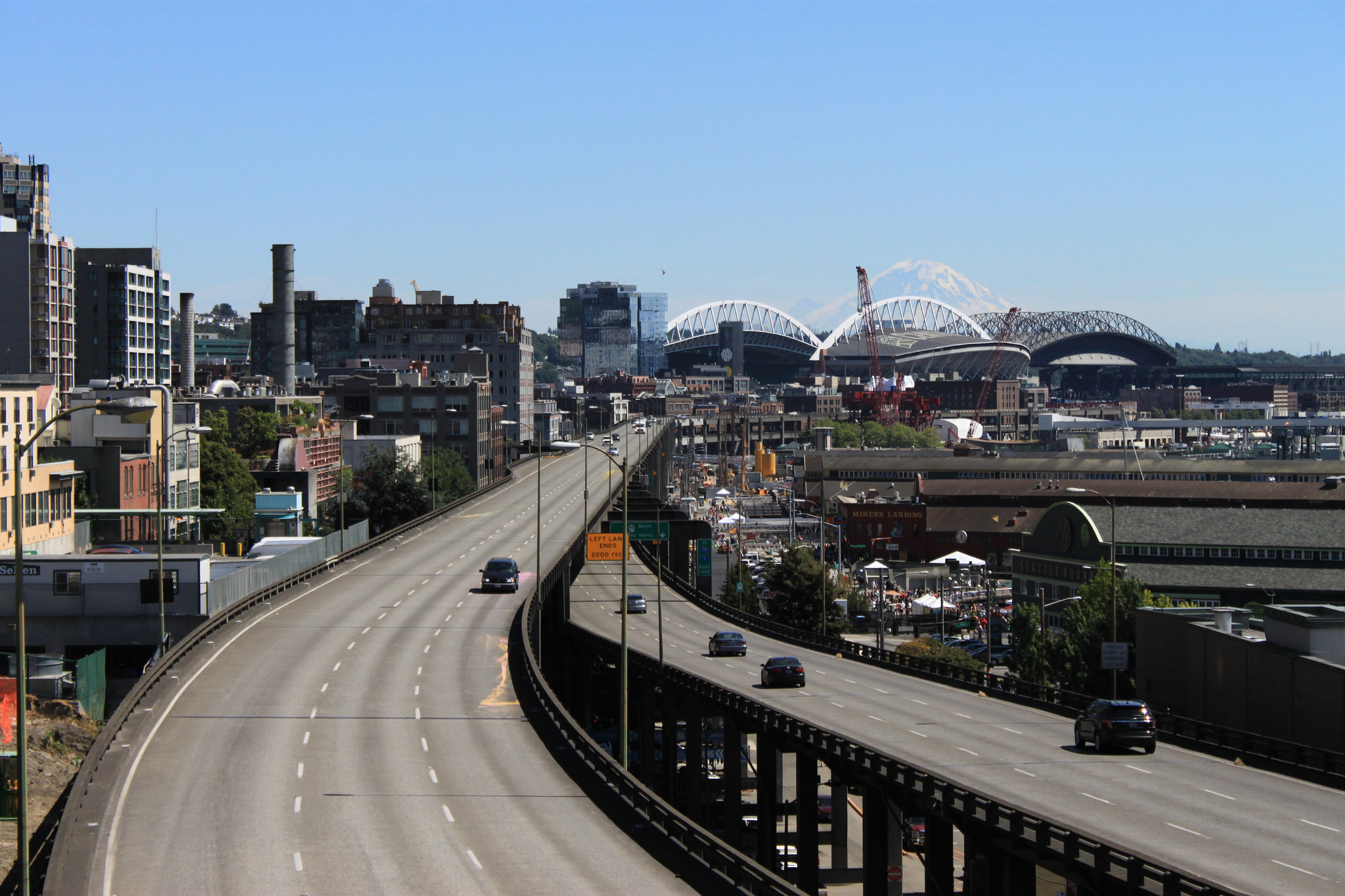 Bertha will soon be tunneling under a portion of the Alaskan Way Viaduct.

Four months after Bertha, the largest tunnel boring machine in the world, caused a 250-cubic-foot sinkhole to open up on Seattle’s waterfront, that same machine is about ready to burrow under a major highway under continuous watch for structural instability. The only assurance the public has that another sinkhole will not swallow the road whole is, essentially, the word of a private contractor — the same contractor that essentially admitted to poor soil management. And the contractor has legally insulated itself from too much intervention by state agencies.

Let that sink in. OK? Now let’s back up.

Bertha will likely begin tunneling under the Alaskan Way Viaduct within the month, at which point Highway 99 will close until the machine’s passed. Don’t worry though — you can still walk under it. If that thought causes you anxiety, there’s some good news and some bad.

We’ll start with the good: Sinkholes are preventable. In fact, according to a 2006 paper from several geotechnical and tunnel boring experts (“Controlling the risk of sinkholes over Earth Pressure Balance driven tunnels — a client perspective”) almost every tunnel-project sinkhole is the result of either operator error or use of the wrong kind of machine. (Some have intoned that the latter may be true in Seattle’s case, but that is a can of worms we’ll leave closed for now.)  The article's findings are good news because it means sinkholes do not generally happen at random. If they did, we’d probably have a lot fewer tunnels in this world.

Despite the notoriously challenging soils on Seattle's waterfront, the crater near Yesler was not random, and likely the result of inattention to soil monitoring on the part of Seattle Tunnel Partners, the contractor responsible for design and operation of Bertha.“We placed a tremendous amount of focus on how the machine was functioning,” head of STP Chris Dixon said when the sinkhole first appeared, implying soil monitoring was not a priority. When asked if this was an oversight, Dixon said, “Some might consider it.” A Seattle Times story last week revealed that several WSDOT higher-ups and consultants essentially predicted what would happen after seeing how much material STP was excavating in the days leading up to the sinkhole.

None of this is uplifting, exactly, but the point is, sinkholes generally give advanced notice. And when smart people are paying attention, like geotechnical expert Gregg Korbin apparently was, they can be prevented or plugged with grout at the first sign of erosion. In an e-mail obtained by the Times’ Mike Lindblom, Korbin wrote just before the sinkhole occurred, “STP needs to gain control of the ground loss.”

After the last sinkhole, Gov. Jay Inslee hit the brakes on the whole tunnel thing until he (or the smart people by his side) felt good enough about what STP was doing to give the green light. Getting to that point required STP to update its work plans, replace the quality assurance employees, add new quality assurance protocols, swap out key tunnel operators and restructure the project's daily meeting schedule.

Additionally, WSDOT will have a team of investigators on site monitoring the work of STP. And when the machine ducks underneath the viaduct, a command center —coordinated between WSDOT, SDOT and King County Metro — will run 24-hours a day. Finally, WSDOT spokesperson Laura Newborn said over the phone Monday that crews will be especially poised to inject grout at the first sign of a cave in. “Because of the changes that were made — the procedural changes — I don’t know that we would ever be in that situation again,” said Newborn, referring to the possibility of a sinkhole.

Ready for the bad news? There is a distinct disconnect between the Tunnel Project as an engineering puzzle and the Tunnel Project as a business/political deal. As such, there are certain red flags. Hopefully they’re irrelevant and we’re all being overly sensitive, but we are talking about an elevated highway that hosts over 100,000 travelers a day.

The technical paper on tunneling hits on this disconnect: “It is current experience that simply appointing an experienced tunneling contractor and requiring experienced operators are inadequate to control the risk of sinkholes occurring." Why is that inadequate? Simply, sinkholes are a lot bigger pain in the side of the client (WSDOT) than they are for the contractor (STP). “Overexcavation during EPB tunneling [the type of tunneling on Seattle’s waterfront] often has little adverse effect on tunneling progress,” it reads. “The direct impact on the contractor is therefore generally minimal. However, for the client, the adverse effect of large settlements or sinkholes are potentially very serious.”

Of course, the reputations of the companies that make up STP could be horribly, perhaps irreversibly, damaged if their work caused the viaduct to come tumbling down. So of course they don’t want that to happen.

But it’s not like they wanted the first sinkhole. And Korbin’s concerns of overexcavation were exactly the red flags raised in the tunneling paper, so the cause and effect should not have been a surprise. STP, after all, is made up of tunnel experts, so if they’re getting caught off guard by predictable circumstances, no one would blame the public for having some concerns about their work under the viaduct.

While the public should take some comfort in the new protocols for STP and the watchful eyes of WSDOT investigators, what’s less clear is how quickly WSDOT would or could intervene if something doesn’t look right.

Most of the tunnel project is predicated on a design build contract. It’s called that because the contractor is responsible for designing and building the tunnel. Makes sense. This contract was sold politically as a positive thing for the state because it puts most of the responsibility on STP, and therefore not on the taxpayer, in theory anyway. The idea is that if something goes wrong, it’s STP’s bill to pay.

But there’s a downside. “In a design build contract, you have to be careful about owning the risk,” says the Transportation Department's Newborn. “If WSDOT directs the contractor to do something, then we own it. We want to be careful with taxpayer money.” In other words, if WSDOT says, “We don’t like what you’re doing, STP, stop it,” anything that occurs as a result of that direction may be on the shoulders of WSDOT, legally and financially.

Here’s an example: With an earth pressure balance tunneling machine like Bertha, maintaining consistent pressure in front of the cutterhead is extremely important to ensure soil stability. If one of these machines halts, maintaining that pressure is challenging and can lead to sinkholes. So if WSDOT sees something they don’t like, tells STP to stop its work, and then something goes wrong because of that stoppage, WSDOT likely just bought itself a massive legal fight over who was responsible for that issue. Is it STP because of the initial problem or WSDOT because its directives led to greater issues?

In fact, this is hardly a hypothetical. When Gov. Inslee ordered a work stoppage after the sinkhole had already opened up, STP cried foul, arguing they’d already fixed the problems and that stopping work could make things worse. Because WSDOT intervened, who pays for all those idle hours will almost certainly be hotly contested after tunneling is completed. “Suspending for cause is a really big deal,” says Newborn. “That was a big step to take.” And that was a reactive decision. A proactive decision would be an even bigger deal.

So, although WSDOT has its investigators and command center monitoring STP’s work very closely, any decision to intervene comes with a potentially enormous price tag for the state. Project Manager for WSDOT Todd Trepanier told the Seattle City Council on Monday that, because of the design build contract, “We have to watch somewhat from a distance.”

Rationally, everything will be fine. Tunnels go under buildings all the time. They even go under water! No one, regardless of financial stake, wants catastrophe. But because of the reality of how expensive this tunnel project is becoming, there isn't necessarily a detour for WSDOT if it sees something it doesn't like: Is intervening worth the cost down the road? If the answer is yes, it could be on us, the taxpayers.