Huskies in the Final Four: This was not supposed to happen 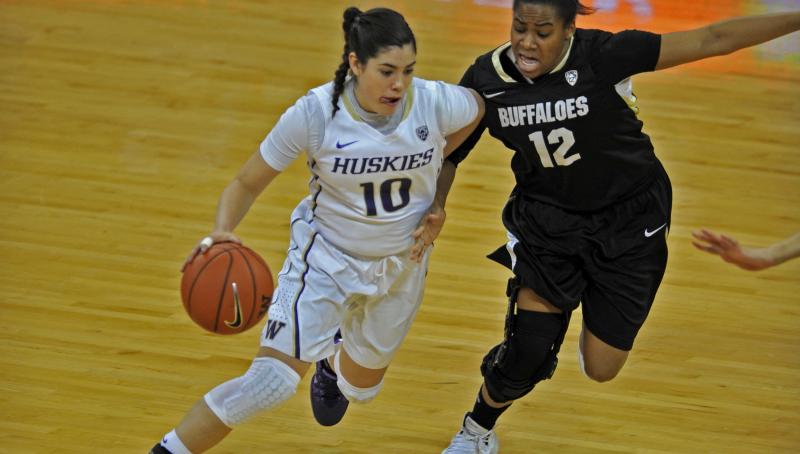 Kelsey Plum is the nation's third-leading scorer (26.3 points per game) and perhaps the greatest player in UW women's basketball history.

That's what most top-shelf competitive athletes do. Whether it's Michael Jordan bringing the ball up, or Randy Johnson throwing the ball chin-high or Earl Thomas vibrating like a jackhammer, their intensity radiates. Intimidates foes. Elevates teammates.

Does Plum, the University of Washington's leading scorer and nuclear-drive device, ever ease up?

What the Huskies are on to next is the NCAA Final Four in Indianapolis, the championship conclusion to the women's basketball season that no one imagined would include Washington. But after four consecutive tourney wins, each by nine or more points, the Huskies are upon a frontier the program has never reached before.

They play Syracuse at 5:30 p.m. PT Sunday in Indianapolis (ESPN2) for the right to meet Tuesday with the winner of the earlier semifinal game between powerhouse Connecticut and Pac-12 Conference champion Oregon State.

Syracuse, Washington and Oregon State are all appearing in the Final Four for the first time and are immense underdogs to UConn, the colossus that is intent on winning its fourth consecutive national title and 11th for its bombastic coach, Geno Auriemma.

But let's not get ahead of ourselves. The moment, stretched over a week after UW qualified Sunday by beating perennial Pac-12 power Stanford in the Lexington, Kentucky, regional final, is one to be savored.

One of the underappreciated aspects of big-time college basketball tournaments is that the format allows the advancing teams to pause for a few days and, well, bask. Or gloat. Or wallow in social media praise. Whatever turns your crank.

The pleasure this week is acute for the university's athletics department, which, despite its heavy investment in facilities, abetted by some alums' fanciful belief in UW's sporting supremacy, has done little winning nationally, aside from rowing.

For a hundred years, crew at UW has been a pre-eminent source of pride and trophies, as well as the subject of a national bestseller, "Boys in the Boat.” But the men's version is not an NCAA-sanctioned varsity sport. It's a club sport, owing partly to the fact that relatively few schools can afford the varsity version — and don't have a 26-mile-long lake out the back door.

The Huskies women's programs in volleyball, softball and cross-country have made some impressive national runs this century. But the two men's sports that fund the entire endeavor, football and basketball — nah.

The football team shared a "championship" in 1991 with Miami, and claimed a couple of other titles in the 1960s. But champions were never won in college football, only declared. Until two years ago, winners were determined by polls voted on by coaches and sportswriters. Military dictatorships in banana republics would be embarrassed to use that system to determine anything.

Men's basketball? One Final Four appearance, in 1953. Coach Lorenzo Romar's team has missed the NCAA tournament five years running, an offense worthy of firing everywhere but Montlake. But as far as most people know, Romar is not an NCAA-rules crook, which makes him almost unique in his profession, and a saving grace.

It is against that backdrop of futility that UW women's hoops emerges as a retina-torching bright spot: A four-game winning streak following a 10-loss regular season and a fifth-place conference finish. Sheer unexpectedness is always thrilling.

In that way, the Huskies did this season something like what the Seattle Mariners did in 1995, playing great ball for six weeks and making the playoffs for the first time, then winning one division series. Success was so rare and rapturous for Seattle that the Mariners earned $380 million in tax dollars for a new stadium.

The Huskies also have another virtue that those Mariners possessed: charm. They are personable with endearing back stories. Two, in particular.

Katie Collier, a 6-foot-3 forward from Covington and Seattle Christian High School, was diagnosed with leukemia as she was being recruited to UW. If her recovery and return to athletic primacy from cancer weren't enough, on the day of her first UW practice in October 2012, she tore the anterior cruciate ligament, medial collateral ligament and meniscus in her right knee and missed the season.

In February, at the 85th annual Sports Star of the Year at the Paramount Theatre, Collier won the event's most inspirational award. Said Neighbors, the coach: "She's probably the toughest person I know."

Then there's Chantel Osahor, the 6-2 junior from Phoenix who is developing a cult following with her flat-footed three-point shot that is straight as a 2x4. Its success is almost as remarkable as her recoveries from a shoulder injury after being struck by a car while riding a bike, a stress fracture in a foot, and removal of a benign tumor from a knee. Not to mention the loss of 70 pounds since the end of the previous season.

She has become the college game's most versatile player.

"You find me another player in basketball, not women’s basketball, but basketball," Neighbors said Tuesday, "that can get 15 rebounds, makes eight threes and has five or 10 assists on the biggest stage.

There’s not another kid in America that you could say is (a) backup point guard, a shooting guard and a power-forward rebounder."

But the Huskies' hoops world revolves around Plum, a 5-foot-7 guard from La Jolla, Calif., who is the nation's third-leading scorer (26.3 points per game) and perhaps the greatest player in the UW program's history.

Her intensity likely has left her little time for basking or gloating. Which worries Neighbors just a little.

“I have to a lot of times slow her down and let her enjoy the journey," he said, "make sure she does, so her brain doesn’t shut down on her, because we all know that your brain will do that to you if you don’t reward it.

"But her drive to be successful is pretty unrivaled in any kid I’ve ever coached.”

Seattle sports fans new to the thrill are eager to see what’s next from all that smoldering.