Is Seattle about to lose its progressive transpo chief? 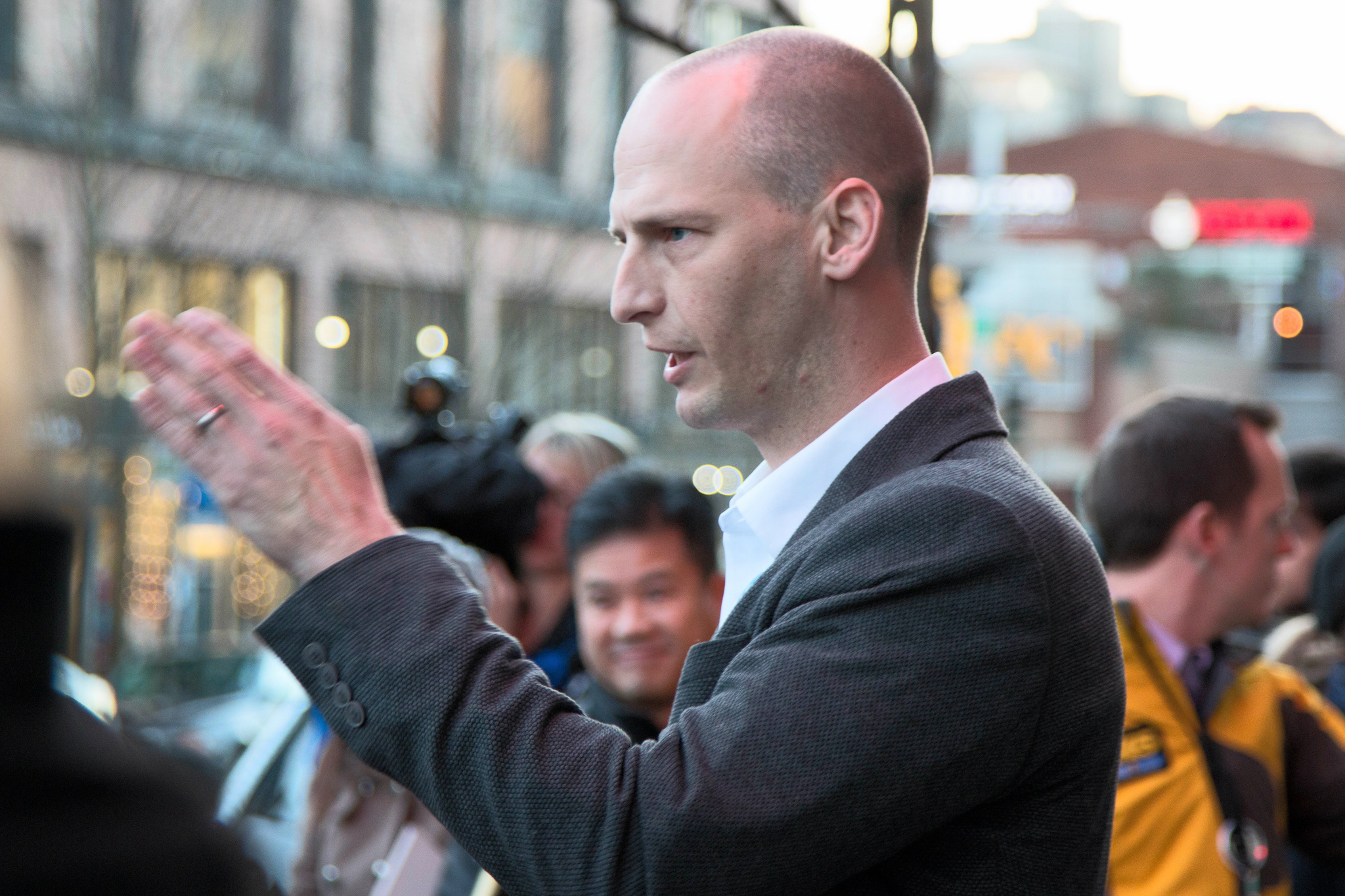 It takes a disaster to make space for a savior. Anyone who's tried to drive south into Seattle from Lake City during rush hour, escape downtown anytime after noon, or drive east to west ever, knows just what the Emerald City's disaster is. In the midst of this transportation nightmare, Seattle’s bike activists, transit advocates and “urbanists” hoped that Scott Kubly could be the savior.

When he arrived, Kubly said all the right things to satisfy Seattle’s progressive appetite, denouncing the notion that there was a “war on cars,” emphasizing the need to fight climate change, and pushing for more transportation options for the city’s traffic-weary citizens. His reputation as an action man, a public servant with private-industry drive, struck a deep chord in a city notorious for its endless, bureaucratic "Seattle Process."

Within months of Kubly’s arrival, the city had a new “protected” bike lane on 2nd Avenue downtown. A little over a year later, the billion-dollar Move Seattle transportation levy, which echoed the doctrine of "complete streets" Kubly has preached for years, passed with booming support. On election night, in the upstairs loft of the Belltown Pub, Kubly was as happy as a man can be, clapping the backs of even nearby reporters.

Now, however, just as Move Seattle is about to get rolling, Kubly finds himself the object of unwanted attention. The Seattle Ethics and Elections Commission has launched an investigation into his relationship with his former employer, a bikeshare company. Some have begin to speculate about his future at the helm department. The Seattle Times Editorial Board seemed to hint Tuesday that Murray should push him out.

Will the post-election glow of the city’s largest-ever tax levy be bright enough to convince Murray to look past the distractions over the last month, or are Kubly’s days in Seattle numbered?

At issue is Kubly’s tenure as the president of Alta Bicycle Share (since renamed Motivate), which he left to come to Seattle. When he was hired, Seattle had already struck a deal with Alta to operate the upstart Pronto bikeshare program. His time at Alta was short, only about a year, and neither he nor the mayor attempted to hide his work history — in fact, it was a selling point.

But Pronto ran into financial problems, which is where the apparent trouble began. As Kubly later told the Seattle City Council, SDOT caught whiffs of financial troubles at Pronto last May, but did not come forward. The department later quietly wrote checks amounting to more than $300,000 to buoy the beleaguered program without notifying the council. And while Kubly advocated on behalf of $1.4 million bail out of Pronto, he never filed a conflict-of-interest waiver explaining why the city should not worry about his employment past.

How damning these actions are depends on one’s perspective, but they did place Kubly as an active participant in a deal between the city and his former employer.

Based on what’s public now, Kubly seems more likely to have run afoul of the city’s code than the state’s. Toby Nixon with the Washington Coalition for Open Government says the state’s ethics guidelines are “fairly specific to current position.” In other words, your resume in and of itself is not usually enough to raise questions.

There have been cases where elected officials have been dinged for helping friends, even without obvious personal benefit. The Washington Supreme Court in 2002 found Spokane County officials at fault for easing zoning laws for an airport project. But in general, the burden of proof is heavy enough that, without personal benefit, punishment for past relationships is rare.

Even advocating for a contract is not a breach of state ethics codes so long as the person doing the advocating didn’t cast a vote in its favor. Kubly was never in a position to vote yay or nay on the Pronto bailout — that fell to the council.

Seattle’s rules, however, are much tougher about past relationships. Under the city charter, city officials and employees are to be disqualified from city business if they “participate in a matter in which a person that employed the covered individual in the preceding 12 months … has a financial interest.”

Kubly certainly appears to fall under this umbrella, a fact that City Councilmember Lorena Gonzalez noticed in 2014, when she worked as the mayor’s legal counsel. According to the Seattle Times, Gonzalez sent Kubly a conflict-of-interest waiver when he was hired, but never followed up and the waiver was never received.

If the ethics commission does find that Kubly has violated city codes, it has a wide range of punishments, from a slap on the wrist (Councilmember Tim Burgess was fined $150 in December for using his official Twitter account to promote his campaign) to recommending that he be fired, to outright canceling his contract and even criminal prosecution. The SEEC never comments on open investigations.

Ultimately, Kubly’s fate likely rests in the mayor’s hands. Although Nixon wasn’t intimately familiar with either Kubly’s case or Seattle ethics laws, he did work closely with Murray in the state legislature. He says Kubly’s future may depend more on whether Murray believes that he was being reasonably objective with regard to the bikeshare program, and wasn’t blinded by his past relationships.

“I think Ed [Murray] is committed enough to using the resources of the city effectively that he would probably be one to look critically to that blindness,” said Nixon, who sits amicably on the other end of the political spectrum from Murray. “Even though Ed’s as liberal as they come, he still wants to see resources used effectively.”

Murray has said that he will withhold his judgment until the results of the ethics investigation have been released.

For the most part, those who supported Kubly at his hiring still support him today. “He’s done a lot of really good stuff since coming here,” says Tom Fucoloro, the founder and editor of the Seattle Bike Blog. “One weird part about this whole ethics complaint is it’s really about the city’s internal process. It was widely discussed that he was from Alta. ... I think Scott would be an excellent person to execute a bike plan if he got the green light.”

Still, Seattle has cooled to Kubly somewhat. The city’s plans for a bike lane network have stalled, a “baffling” thing to Fucoloro, who calls the protected lane downtown an “island of a demonstration project in a sea of dangerous streets.” While Fucoloro doesn’t believe that Kubly’s actions with Pronto constitute a fireable offense, he sees ample room for more quick and clear communication. Whether that's the fault of Kubly or his boss, Fucoloro couldn't say.

On the industrial side, Warren Aakervik of Ballard Oil calls Kubly a “decent guy,” but is withholding judgment until he sees the final copy of the Freight Master Plan, due out in the coming weeks.

While he wasn’t directly disparaging of Kubly’s work, Aakervik and others in the manufacturing community are clearly concerned that bike priorities trump freight mobility, a complaint that precedes Kubly and Murray. “There is nobody that is grounded enough in freight mobility,” not just in Seattle but nationwide, Aakervik says.

All this highlights what may ultimately be the strongest argument for keeping Kubly right where he is: This would be an absolutely terrible time for the mayor to lose him.

The boulder that is Move Seattle has just begun to roll downhill. An oversight committee will soon be set, budget tweaks reflecting its passage have been made in City Hall, and Murray has already begun discussing the levy's first 100 days. And while the momentum is building, there is an outspoken population in Seattle that is ready to pronounce the levy a failure. Proponents of its work, like Fucoloro, therefore advocate seizing 2016 as an opportunity to get some work done.

Considering all of this, ousting the man who is set to head it all could be a massive setback for the mayor’s transportation agenda, and his efforts to remake a swarming city.