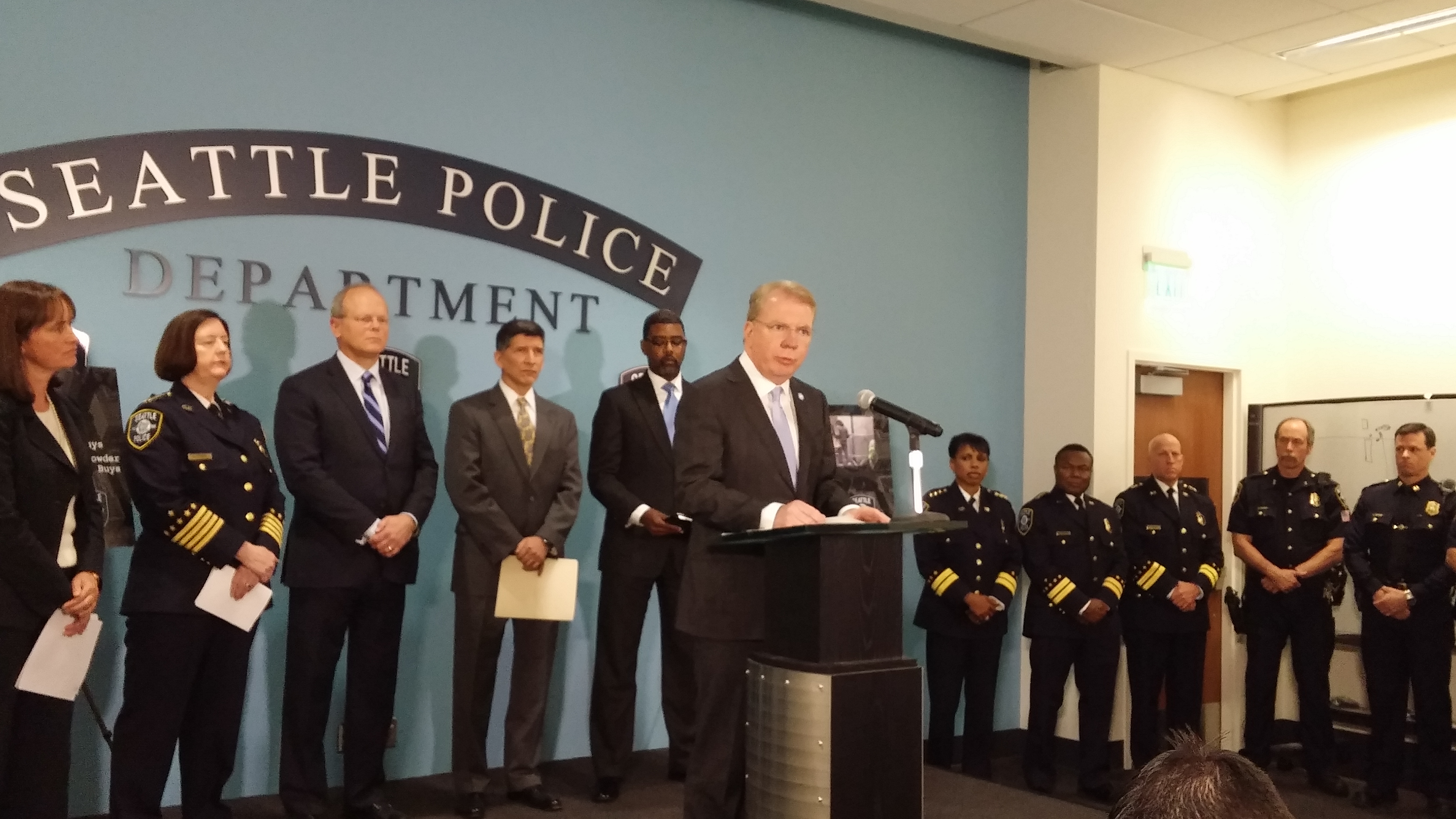 Mayor Ed Murray at a press conference in 2015

In with one levy and out with another. Hours after the Seattle City Council advanced this August’s proposed $290 million housing levy out of committee, Mayor Ed Murray announced Friday he would not propose a public safety levy, something he's considered for years.

Since Murray took office in 2014, the prospect of a levy to fund public safety projects has constantly hung in the background. In addition to technology upgrades in the Seattle police and fire departments, the potential package was driven in large part by a long-discussed new North Precinct police station. During budget talks last fall, City Budget Officer Ben Noble hinted the levy would come in at well over $100 million.

But amid a series of successful and future tax proposals — including 2014’s Pre-K measure, 2015’s Move Seattle transportation levy, and this year’s upcoming housing and Sound Transit levies — Murray as well as Councilmember Debora Juarez, whose North End District 5 will host the station, have been feeling around for alternative ways to fund the project. As Murray told Crosscut in an interview last week, “Despite what some folks in some other publications say, I’m not just looking for new taxes to throw on the ballot.”

In place of a ballot measure, Murray declares the city will find the $139 million it needs through a combination of Real Estate Excise Tax (a tax on real estate transactions), a 30-year bond to be repaid through future REET receipts and the “one-time sale of other city assets" — property, although no details were forthcoming.

Recognition that the North Precinct needs a new police station has, for the most part, transcended political affiliations for the last decade. Built in 1984, the station was meant for 150 officers, but now houses about 250. Plans to move forward with a new one date back to before the recession, but were tabled when the economy tanked.

In 2013, as the economy was rebounding, the council approved the purchase of a piece of property off Aurora Avenue near North 130th Street. And last fall, Seattle’s Finance and Administration Services approved $4 million to complete designs for the building and wrap up the permitting process. To date, $21 million has already been spent on the project.

“Because of our vibrant local economy and vigorous real estate sales, we can construct our new North Precinct within existing and projected resources,” says Murray in a statement. “While we do have other public safety infrastructure projects on the horizon, there is no need to send a public safety levy to the ballot in near future.”

Juarez, too, is positive. “Public safety and community policing are high priorities for Seattle residents,” she says in a statement. “A new police station will house more officers in a better location, which will help ensure police are available to residents when they call. Safe communities are healthy communities.  The proposed financing approach for this facility means we can make a significant investment in our community without asking voters for a new tax increase.”

But not everyone is so hot on today’s announcement. “I think there’s a fair amount of work to do to get this to a good spot,” says Councilmember Mike O’Brien. “The tone of the press release was obviously very positive, but there are some concerns I have.”

While O'Brien favors replacing the old station, his chief concern is the scale. “My questions are just around, we have a lot of needs in public safety and I want to make sure we’re making the investments we have as smart as possible to address the top concerns we’re hearing from folks,” he says. “I’m not sure spending $160 million on a building is the best response.”

Additionally, O’Brien is disappointed that the community was not more involved in the planning process and is worried that, as the Seattle Police Department works through the consent decree with the Department of Justice, policing may look much different 10 years from now. “I believe if we spend over $100 million on a new police precinct, we want to incorporate what policing will look like in the next decade. People who are shaping that … should be at the table.”

And finally, there's the question of what using REET on this project will mean for the city’s capital needs elsewhere.

O’Brien says he sent along his concerns to the Seattle Police Department weeks ago, but hasn’t heard a response. SPD did not return request for comment.

Moving forward, the council will get a chance to weigh in on the budget implications of the new precinct. If everything moves forward smoothly, construction would begin in 2017, to be finished by 2019. But judging from Councilmember O'Brien's response today, the proposal's avoidance of a new tax levy will not assure it a rubber stamp.