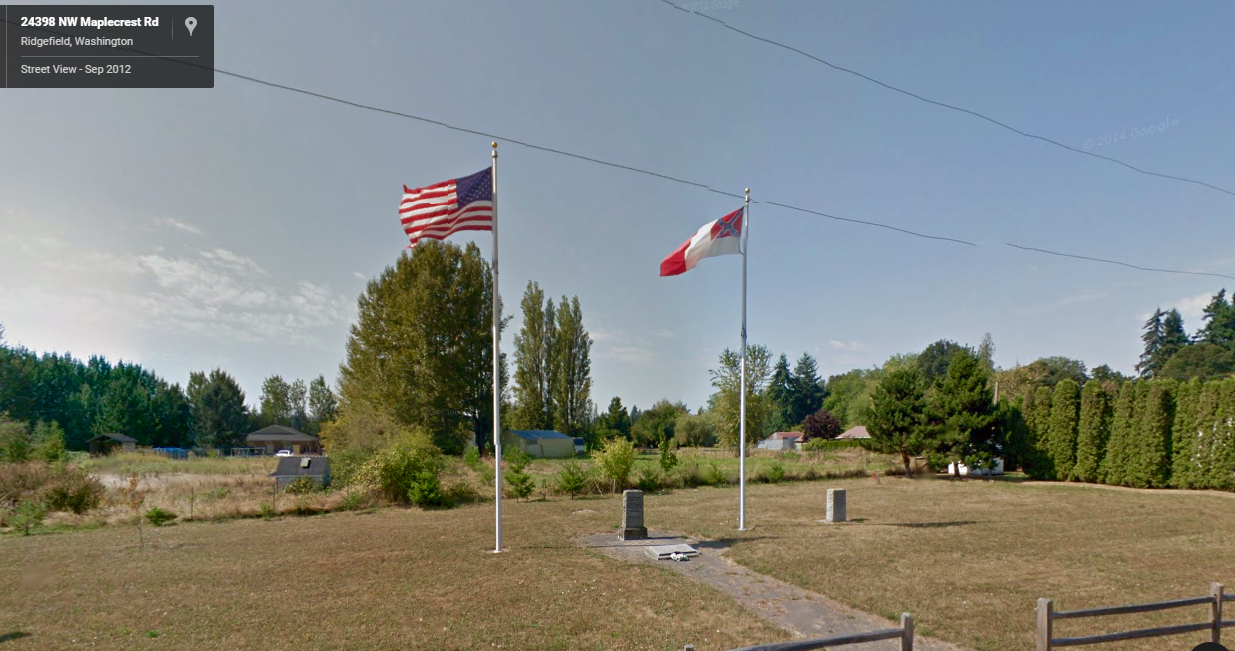 Google's street view of the U.S. flag on the left and the Confederate flag on the right at the private Jefferson Davis Park in Ridgefield. The marker between the flags is from Highway 99.

Changing place names is frequently cited by opponents of a new name as being a trivial pursuit, unworthy of the effort. But the debate that often ensues proves exactly the opposite: Place names are important, full of meaning and capable of firing up intense passions.

Try leaving a name off a map, and you’ll catch hell. Back in the 1980s, I was editor of the monthly Washington Magazine. Every issue carried a calendar of events with an artist’s impressionistic map of the state dotted with selected cities. We left off Yakima to reduce graphic clutter, and I was promptly deluged with angry letters and phone calls from Central Washington readers who demanded to know why we hated Yakima. Apparently, people considered any map we ran to be “official.” It was a lesson in the power of a piece of art.

Attempts in the early ’00s to remove the designation of Highway 99 as the “Jefferson David Highway” by Snohomish Democratic representative Hans Dunshee unleashed a firestorm of hate, especially from the talk radio crowd. One email he received read: “You sir, are a liberal, racist piece of trash. I hope your jack boots fit to [sic] tight while you goose step to your NAZI office. Your racist actions WILL be remembered in the next election.”

The highway designation had been applied by the Daughters of the Confederacy in the 1930s, and though it was never officially adopted by the state, the highway department helped installed two Jefferson Davis plaques to commemorate the naming.

Ultimately, the plaques were removed, no one in the Legislature had to take a vote to make the change since the name had never been officially adopted, and Dunshee remains in the House of Representatives. So, while the issue was resolved, it had turned into a cause célèbre for folks who railed about government run amok. It also resulted in one of the Davis markers being moved to private property along I-5 with a Confederate flag being flown prominently, a bold middle finger to meddling Northwest liberals driving on the freeway.

Still, we’ve made progress. In the recent session in Olympia, the Legislature passed a bill asking the State Transportation Commission to honor a black Civil War veteran who became an early settler of Snohomish by renaming Highway 99 “The William P. Stewart Memorial Highway.” Stewart was with the 29th U.S. Colored Infantry that fought heroically with high casualty rates near Petersburg, Virginia.

In the current push by Seattle Democratic state Sen. Pramila Jayapal to change racist place names around the state, there will be challenges. Not all such name changes are hugely controversial. For example, the effort to change the name of Coon Lake in Stehekin to Howard Lake was successful, and though some locals opposed it, it had the support of many in Chelan County, including the county commissioners. Earlier names referencing the anatomy of “Squaws” or referencing “Nigger” have been changed with little complaint, and no dire consequences.

But the issue can devolve into a kind of urban-rural culture war. One reason is that the racist names tend to be on rural geographic features, small lakes, creeks or peaks. Many come from the pioneer period. Many occur in areas populated with few if any of the people who are often referenced in such names: blacks, Asians or Native Americans. Locals might claim the names are not offensive to anyone who lives there. And who are city folk to boss rural folk around?

In an article about the Jayapal-led name change effort, the Longview Daily News reported that a Wahkiakum County commissioner, Dan Cothren, signaled his dismissal of changing the name of Jim Crow Point there by saying he “would probably tell the person, ‘Well you need to get a life’ ” and calling the ideas “ridiculous.” He later told a writer for the Wahkiakum County Eagle in Cathlamet, “I just don't like it that folks from the urban setting telling us from the rural setting what to do.”

Such sentiments are not uncommon, but often the moves to change names come from locals.

If names had no meaning, we wouldn’t fight so hard to save them, or spend so much energy to change them. Seattle was once named Duwamps, Auburn was once Slaughter, Olympia was first Smither, then Smithfield, then Marshville. Place names are much more fluid than we think, so is our collective identity. We often use them to express current identity, not just past connections.

The goods news is that no one is telling the people of Wahkiakum or any other Washington county what to do. Reconsidering a place name allows plenty of room for historical research, local values, debate, public input and disagreement to take place before a decision is rendered at either the state or federal level. It’s an opportunity to learn more about our heritage. Jayapal says she has heard from some folks in Wahkiakum Co. who didn’t know the term “Jim Crow” was at all racial. Another man told her he’s often been embarrassed when tourists visit and ask about the name.

Name discussions can educate all sides in the discussion, and in some cases they result in updated maps that reflect who we are now as opposed to who we were then.

The writer of The Wahkiakum County Eagle's article, Rick Nelson, supports changing references to Jim Crow. “In my lifetime, the county has had some other name changes. We once had 'Jap Island' and 'Nigger Island' off the shores of Puget Island, and changing those names was a welcome move to change the heritage we will leave for future generations,” he writes. “Getting rid of Jim Crow in Wahkiakum County would be another welcome move to define our heritage."