Washington among top 10 states for refugees 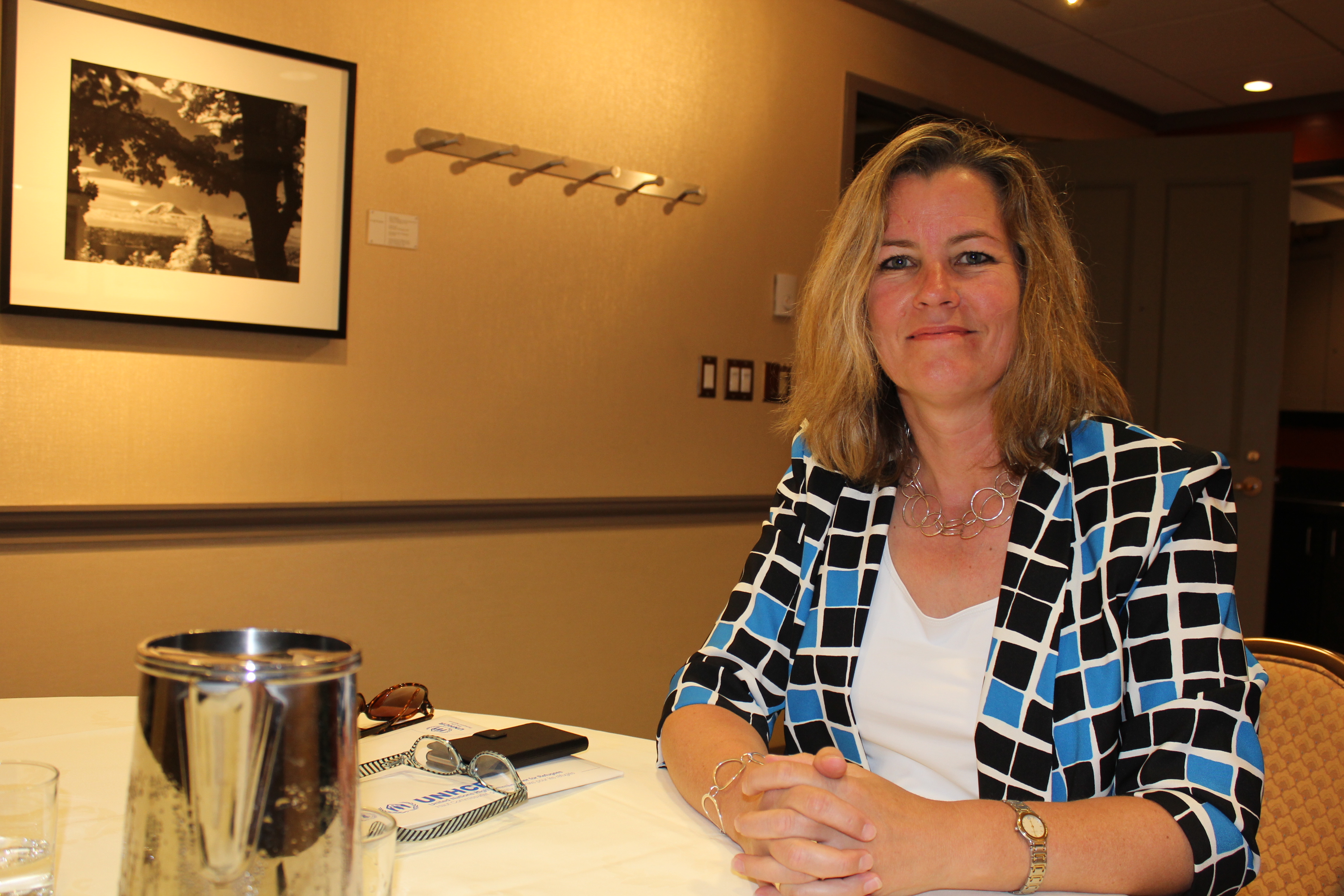 Seattle received a global visitor on Wednesday, here to talk about a hot topic in the United States and abroad: The world refugee crisis.

Kelly Clements is the deputy high commissioner for refugees for the United Nations refugee agency, known by the acronym UNHCR. Clements assumed the Geneva-based role in July 2015, after years serving as a deputy assistant secretary for the U.S. Department of State. She sat down Wednesday night at Washington Athletic Club with many of the city's movers and shakers to discuss how to engage Seattleites in humanitarian relief, and refugee and immigrant communities.

Crosscut’s Cambria Roth and independent journalist Goorish Wibneh, reporting for the Seattle Globalist, caught up with Clements before her talk. What follows is an edited version of their conversation.

Why should Seattleites care about the refugee crisis? How does it pertain to us?

Well first off, Washington generally, and Seattle in particular, has been an incredible host to refugees over the years and decades. You’re in the top 10 states in the U.S. in terms of refugee resettlement, and in the last two years (from 2015 and 2016 so far) 4,100 people have been resettled in this community.

Refugees at a very grand scale are an international concern, and we need to care. In the world today, we are looking at 60 million people on the move, forcibly displaced. The lion’s share of those have been in what we call protracted displacement, so they’ve been outside their home for 25 years. We need to find other solutions if political solutions are elusive. And that comes back to Seattle, that everyone does their part. That’s one piece of it.

The other piece is that refugees and migrants are amazing contributors to society. In terms of economic sparks — in working hard and not only supporting their families, but also supporting communities. Since the Vietnam War, the U.S. has resettled 3 million refugees, and they have turned into economic producers for this country, and made the country richer as a result, culturally and economically.

Are there Syrian refugees in Seattle?

There are very few Syrians that have been resettled in Seattle. From October 2014 to October 2015, Washington has received 1337 refugees, the largest arrivals being from Ukraine, with 323, Somalia, at 214, 214 from Iraq, and 87 from Burma.

The numbers overall [from Syria] are quite low, even as the government is trying to ramp up. Resettlement is a solution for only about 1 percent of the population, so it’s a small number we can offer this kind of support to, and we are quite selective of who we refer.

The U.S. refugee agency has provided about 25,000 referrals to the U.S. In the neighborhood of about 1,200 to 1,300 Syrians have been admitted into the U.S. to date. There are 31 Syrians that Washington State has received.

What do you think about the media coverage so far of the Syrian refugee crisis? There has been a lot of fear mongering — suggestions that there might be terrorists traveling with them.

We have tracked it closely. We are alarmed and we are concerned. It amplifies inaccuracies and falsehoods and is intended to generate fear, when really it is the refugees who are fleeing the very things they are being accused of perpetrating. That is why they are in need of international protection.

We have partnered with several groups to start a social movement, in terms of refugees and painting the narrative in a very different way, back to how we started in terms of the traditions of what refugees can add to the community and why we should care. For example, the Humans of New York piece, where they are profiling different refugees, or even an event I’m on my way to in L.A., where photographers have taken individual pictures of refugees, again to tell individual stories.

Numbers can be numbing, and it’s really the individual stories, everyone has one — and if we just stop to listen, they are like us, but they’ve been through horrific things.

What about Donald trump’s statements about not accepting Muslims, and other politicians tainting refugees? How does that sort of thing impact refugees on the ground?

Quite badly. One of the things that both studies and our experience has [shown] is that successful integration is welcoming those to the community in a wholesome way — whether through jobs, school, services and community, whether or not that is a place of worship or another way. When refugees or migrants are integrated into a community, that’s when bonds are established that make it easier to repel such aggression. If that’s absent, it’s even more difficult for a refugee or migrant to assimilate. It’s quite contrary to how the whole system is put into place to make it more likely that a refugee can succeed in the U.S. without long-term support from the U.S. government or from other local authorities.

We're hearing a lot about Syria. However, in the volatile region of East Africa there are hundreds of thousands of refugees from South Sudan, Eritrea, Somalia, and more fleeing violence and persecution. Are there other such refugee populations that aren't getting the attention they need, and is there an empathy inequity in the international community that your agency recognizes?

It’s a great question and I am glad you are asking it. There has been a lot of attention on Syria, a lot of attention on Iraq — even in this country now, Central America and people coming north that we think is a growing refugee crisis. There are parts of, particularly the Horn, as you mentioned, or East Africa, even North Africa, they are definitely not getting the attention they need. And there are countries that have been hosting multiple refugee populations for decades, including Ethiopia, Kenya, Uganda, Tanzania and even Rwanda. We’ve got the conflicts related to South Sudan and Somalia. Ironically, there are parts of Somalia that are actually receiving refugee returns from Kenya. That is happening on a small-scale basis but there are parts of the country that are safe and the government is welcoming people back. It’s a very complex situation.

What we have said very clearly is that unless we try to address those root causes, and policy makers and governments come together to solve those conflicts, then eventually we could see people from that part of the world also on the move. We have already seen people going to Libya trying to get to Italy. You saw the tragic circumstance today with the 500 people that perished on the boat trying to reach Italy. Those sorts of things, we have to get back to both robust humanitarian aid and then support too.

What kind of role are you expecting the private sector to play?

The private sector wants to help. They don’t want to just write checks. They want to help us solve problems. If there is something that we need to have a different type of solution, a new innovation, or something that will make a refugee’s life better — that is where the private sector wants to come in. So we are partnering with a number of businesses, including a neighbor here in Seattle, Microsoft, on our refugee connectivity project.

One of the things we’ve seen in the European context is that there’s nothing more important than a charged smartphone. That is your information tool. That is what tells you where your family is, how to get to where you’re going, et cetera. So we have looked at this, not just in the European context, but we’ve looked at it in parts of Africa and so on. How can we offer the valuable expertise and technical help the private sector has to lend with these sorts of situations where it maybe both of benefit to the local communities and towns, and to the refugees to have cell towers that will then provide some waves for people to connect?

What can private citizens do to get their elected officials — or even average people who are worried either for safety or economic reasons — to help refugees?

Talk about it. I continue to be of the strong opinion that now is the time for social movement. Now is the time to talk about how refugees and migrants add to a community. The best way to do that is through leadership and sending very strong signals that people not from this country are welcome to this country. And to be able to put policies and programs into place, which the United States has through decades of very strong resettlement programs and an active migration system of welcoming people into U.S. communities.

Americans care deeply about refugees, and they have cared about refugees for decades. That doesn’t change now. There is a vocal minority, unfortunately, that has put a narrative out that is hateful. It is not compassionate and that needs to be countered. The exact opposite needs to happen in terms of refugees being contributing members of the society. This is a place of safety.

The event was hosted by the Master of Arts in Applied International Studies at the University of Washington.