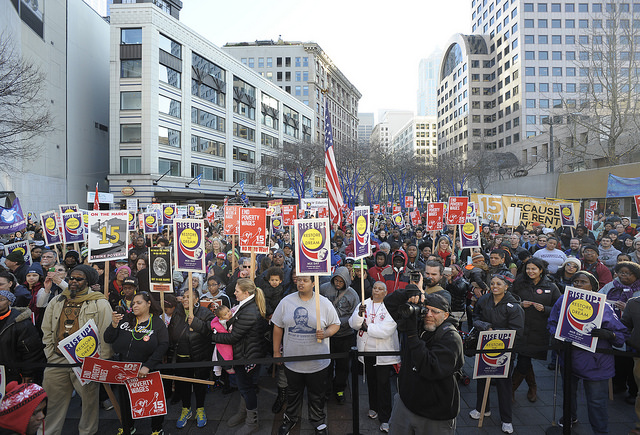 So far, the minimum wage hasn't bumped prices as some feared.

Seattle has committed to a fully implemented $15 minimum wage by 2021 and, barring a coup d’etat at City Hall, that isn’t going to change. Yet with each yearly bump — the wage rises to between $10.50 and $13 this year, depending on business size— debates will surely spring anew. And when they do, it is Professor Jacob Vigdor’s job to make sure that everyone is working from the facts.

Vigdor and his team of researchers and economists at the University of Washington have undertaken what many hope will be the most comprehensive look ever at the human and economic impact of a higher minimum wage.

Their findings after one year, which they released Monday: The impact of a higher wage on pricing is minimal, so far — a win for advocates of $15. But much of the value of the study's early returns is in employee and employer perceptions: what they believe will happen in the future. There, we see a persistent ambivalence among low-wage workers, whose higher wages still don't cover basic expenses, and a lingering belief among about a third of businesses that they will need to cut staff.

Vigdor’s team is certainly not the first to examine the effects of raising the minimum wage, but it is unique for a few reasons. Most important is that there are few examples of a jump as significant as Seattle’s. While $15 has become an oft-heard rallying cry recently, no region has gotten to that level quickly enough to draw any real conclusions about what it’s done.

The study is also notable because it’s focused on a municipal wage hike as opposed to state or federal. That’s worth a look to see whether people and/or businesses migrate outside of Seattle’s borders — a much more believable scenario on the city-level than state or federal. “Maybe instead of using a service in Seattle, [the restaurant] might ship them down to Renton,” Vigdor told Crosscut a year ago.

Finally, while Vigdor and his team lean heavily on data — both the state’s and their own — they’ve also committed to a qualitative examination, interviewing low-wage workers, mostly women and minorities.

One the loudest arguments against a higher minimum wage is that prices will follow the spike in wages, thereby neutralizing gains. If you make an extra buck at work, but spend an extra buck in the store, the argument goes, you haven’t gained much. So far, that has not been the case, says Vigdor. The survey noted minor increases in the price of groceries, retail and rent, but businesses and housing prices outside of the city also increased, making it hard to tie wage increases to rising costs.

Restaurant prices jumped the most at about 7 percent, but there, too, prices outside of Seattle were also up. Some of the higher increase could be thanks to restaurants doing away with tips in favor of service charges, a movement that’s been spurred on by the wage hike. But the broader explanation may be, according to the study, that restaurants seem to be trying to get ahead of the minimum wage faster than other businesses. Tom Douglas restaurants, for example, went straight to $15 and added a 20 percent service charge.

While it is still early to see any significant trend lines, the data and anecdotes the team collected from employers and employees start to develop a baseline of impressions. For example, while employers are decently aware of the wage hike — 80 percent knew exactly where the wage stands, while about 12 percent actually overshot, believing it had already hit $15 — only 29 percent of employees had a detailed understanding of the minimum wage laws.

In interviews with 55 employees, the researchers found ambivalence. “I think that, as soon as it all goes up, everything else is going to go up," said one food service worker named Nina (a psuedonym). "Our gas is going to have to go up again. My rent is not going to be as cheap. With making that much you might not even need Section 8 or food stamps, supposedly.”

“[My life will be] probably the same because the rate increase and then the living expenses increase as a result…More pay, but I have to pay more for stuff,” said an assembly line worker named Binh (also a psuedonym). Some of this ambivalence could be the result of another finding: Wages are still dwarfed by expenses. Whether these workers take a more positive spin a $15 will be interesting to note.

Talking about what they plan to do is precarious territory, however, says UW’s Jennie Romich. “Causality is very difficult to parse out,” she said. “It could be that people use the ordinance as justification for something that would have happened in absence of that.”

And the negatives could, arguably, be balanced out by the positives. For example, the number of businesses that planned to raise the wages of employees already earning minimum wage was about 60 percent.

Councilmember Lorena Gonzalez pointed out that the survey provides “a really robust baseline understanding of how people were thinking at the time the law came into effect.”

Vigdor's ambitions are to produce an objective look at $15. “Our job is like being a referee,” he said. His motives are noble, but will it really dampen the noise? Wouldn’t count on it.

An earlier version of this draft misstated wage increases between $11 and $13.