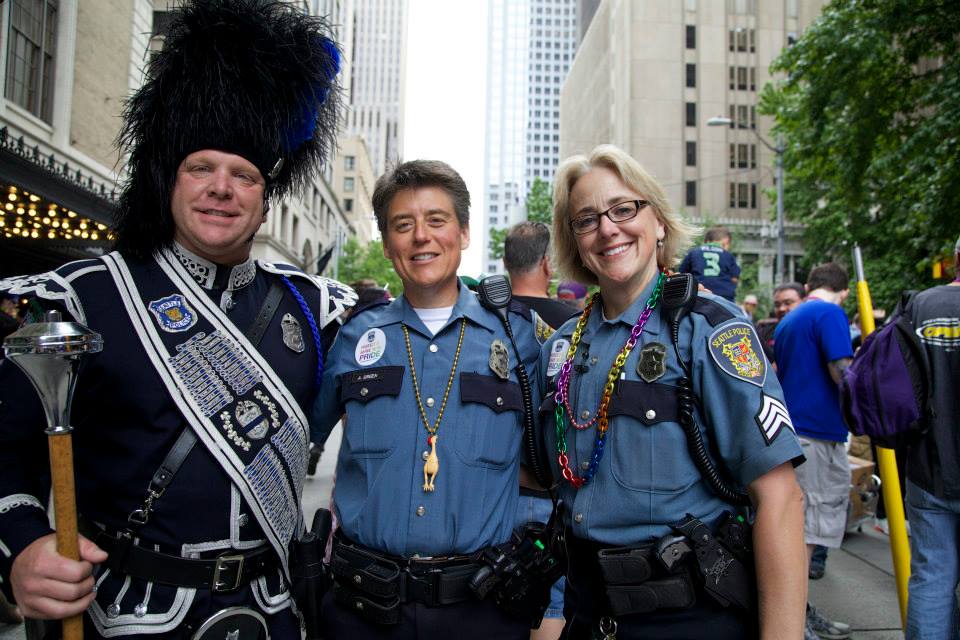 Seattle Police officers at a parade. Events are a big source of overtime.

Right around 2008, as the United States housing market was collapsing in on itself, something unusual happened in the Seattle Police Department: the year-to-year increases of SPD’s overtime budget started turning south, declining every year until 2012. Meanwhile, actual overtime expenditures merely hesitated before climbing faster than they had in years, budgets be damned.

In 2010, the two lines crossed. By 2015, overtime expenditures were roughly $25 million, while the department’s overtime budget was only $15 million.

Some of this can be blamed on the recession. Hiring all but froze as the city’s budget was squeezed. Now that Seattle is in its boom period, the department finds itself about 150 officers short of where it should be, according to an independent audit commissioned by the Seattle City Council. That’s a hard number to make up quickly, so of course overtime is going to jump.

But according to a report from the Seattle City Auditor’s Office released Monday, SPD hasn’t done enough to fix the problem. “Although some of these factors are outside of SPD’s control,” reads the report, “many are within SPD’s control. We identified significant gaps in SPD’s overtime internal controls that led to overtime errors and inefficiencies, including duplicate payments of overtime.”

While the auditor’s office essentially gives the department a pass on overtime related to events and protests (a pass many community groups would not be so willing to give), it is blunt in its assessment of the systems behind overtime usage.

For one, if the department issued a more realistic overtime budget, it would mean less upfront money elsewhere in the department, but also less scandal over how much the department goes over its allotment. It’s a scenario in which either permission or forgiveness could be sought to surpass the budget, and one side always wins. Reads the report: “Many (SPD) section leaders view the overtime budget as ‘political’ and appear to lack motivation to be vigilant about trying to manage overtime hours within the budgeted levels.”

Additionally, the department is severely lacking in its policies for administering and approving overtime. There is no specific set of circumstances guiding superiors for when to approve overtime. And when an employee goes to record those hours, there are two systems for marking those hours, occasionally causing confusion and repeat billing.

The report’s recommendations are, essentially, do a better job at all of the above: be more clear about when overtime is justified, keep better track of hours and scheduling, budget more realistically, track how often employees are working second jobs (for concerns of fatigue), provide better analytics, and plan events more consistently.

Perhaps the most intriguing suggestion is that SPD convert some amount of sworn peace officer positions to civilian jobs. This proposal has been bumping around other corners of police reform for a while and this report affirms it. Civilians can charge overtime as well, but it’s usually not as expensive. For example, sworn officers currently staff the Background Unit, which does background checks, and the Office of Professional Accountability, where investigators examine complaints against officers. This suggestion would almost certainly need to be introduced into negotiations with the police unions, which are already well underway.

The audit’s results “are not unexpected”, according to SPD’s Chief Operating Officer Brian Maxey. He essentially agrees with nearly all the report’s criticisms, although he hedges his concurrence with pledges that SPD has already begun to make progress.

“The audit confirmed what I think we have suspected,” says Councilmember Tim Burgess over the phone. “The internal protocols, systems, record keeping are in dire need of reform.”

For Burgess — a member of the search committee that hired Chief O’Toole and strong advocate on her behalf — this is the raison d’etre for the new-ish chief. “[The City Council has] been very consistent with Chief O’Toole: clean up that department. These systems should have been in place years ago. What Kathy has discovered to her chagrin is they’re just not there.”

In a department that awarded four individuals over $100,000 in overtime over just a year, there will no doubt be pushback in introducing new strictness to the system. But as the auditor’s report makes clear, the department will never live within its means without it.