The ultimate test for the mayor and business community 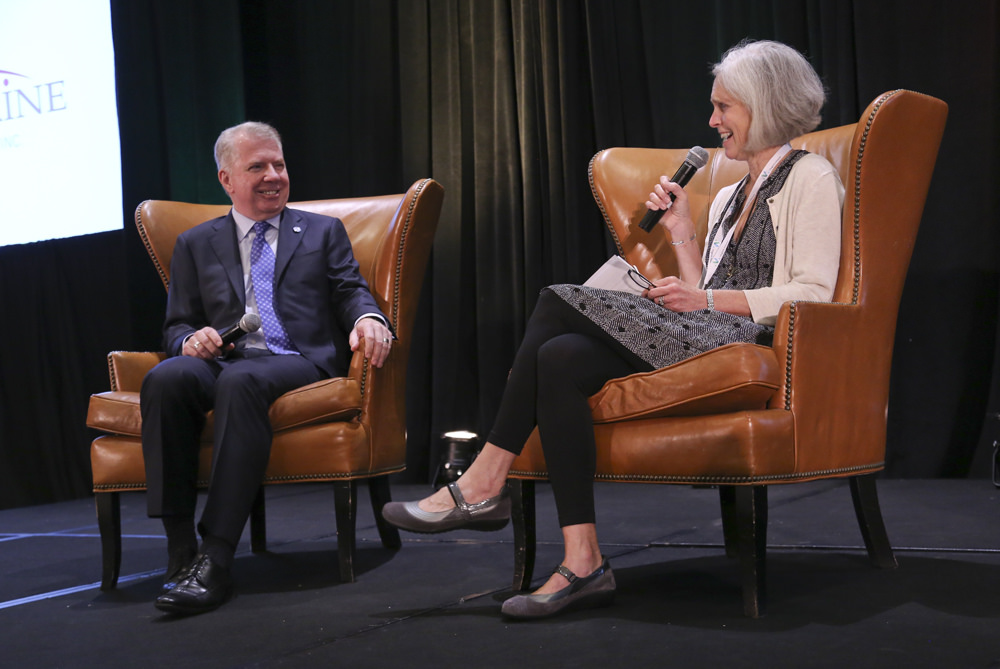 Ed Murray and Maud Daudon were seen in a Chamber photo from the organization's 2014 annual leadership gathering.

Seattle Mayor Ed Murray is in a tight spot, squeezed between business interests and a city council apparently eager to advance the follow-up to the $15 minimum wage.

On one side are the increasingly labor friendly city councilmembers who show no signs of pausing in their pursuit of regulation that favors workers.

On the other, the Seattle Metropolitan Chamber of Commerce, which is no fan of added regulations, and is pushing Murray to show that he hasn’t forgotten the business community’s support on his ambitious ballot initiatives, lest he lose that support in the future.

For a mayor who loves to walk the middle road, this is surely an uncomfortable position.

Two weeks ago, Murray paid a visit to the chamber. There was an executive board meeting and Murray wanted to talk about the Sound Transit 3 transportation package. He had a half hour, opening with a comment about the Seahawks, the great Seattle equalizer. But after about ten minutes, the discussion was already winding down, so he opened up the floor to questions. Not surprisingly, the conversation quickly turned to labor and taxes.

At issue was whether Murray would impose a new tax on business to fund the Office of Labor Standards, and also the seemingly inevitable march toward requiring businesses to give employees advanced notice of schedule changes. The chamber and people in the room that day have concerns about both, something they made clear to the mayor. The decisions, some argued, were being made in a vacuum, without business at the table.

After the mayor left, Chamber President Maud Daudon took the floor. According to sources in the room, she gave an impassioned speech about how the mayor and the chamber share a two-way street, calling on her members to remind Murray that the relationship cannot be one-sided. In the days that followed, Daudon doubled down in a message to chamber members (first reported on by Erica C. Barnett), advocating against funding OLS with a tax and urging caution on secure scheduling.

More intriguing yet, this all came weeks after a rumored blow-up in the mayor's office between Daudon and Murray.

Murray is considered to be among the most progressive mayors in the country. But in Seattle, he is a centrist in the true sense of the word. His tenure so far is defined by walking a thin line between oft-warring parties — business and labor during the $15 minimum wage debates; developers and housing advocates throughout the Housing Affordability and Livability Agenda meetings; homeless advocates and neighborhood groups amid his homelessness state of emergency.

"The mayor’s process to addressing issues facing the city is to bring people together," said Murray spokesman Jason Kelly in an email. It’s a strategy that can end in making everyone happy or no one.

After his first year, Murray had mostly maintained a reputation for being an action guy. The Seattle Weekly ran a cover story with Murray’s face and the headline Governing at Light Speed. But in achieving his goals — $15, Pre-K, the Move Seattle transportation levy — Murray has built up some political debt.

In an interview with Crosscut earlier this month, Daudon alluded to the chamber’s support of Murray’s initiatives, an unimaginably liberal stance compared to the national chamber of commerce. "Businesses have supported $4 billion in new local investments over the past two years," she said. Other business representatives have said that $15 only happened because business was willing to play ball. And on the mayor's housing agenda, the chamber is "fully committed to supporting all components of the [Housing Affordability and Livability Agenda] recommendations,” Daudon said in an e-mail.

When asked how important business support has been to Murray's success, Daudon referred Crosscut to the public disclosure commission to see the extent of chamber member contributions. Indeed, the same individuals and companies that contribute to the chamber’s political action committee (PAC), Civic Alliance for a Sound Economy — Vulcan, Amazon, Boeing — routinely top the list of donors to Murray’s ballot initiatives. While donors are free to do as they please, the endorsement of the chamber certainly helps.

Daudon told Crosscut that the chamber wants to keep supporting Murray’s agenda, but implied that the support isn’t guaranteed. A decision on the mayor’s part to jeopardize that relationship by supporting a new tax on businesses, she said, would “not [be] strategic.”

And Murray is going to need all the help he can get. In August, voters will decide on a $290 million housing levy. In November, we’ll vote on the $50 billion Sound Transit 3 levy.

In a sign that he is making concessions to business interests, last week, Murray announced he would fund the Office of Labor Standards not through a tax on business, but with money from the general fund instead.

When asked if this was in response to the chamber's opposition, the mayor's spokesperson Kelly only answered, “After consulting with labor, business and other stakeholders, the mayor landed on his proposal to expand the Office of Labor Standards using resources from the General Fund for both outreach and enforcement."

The next question will be how Murray balances proceeding on secure scheduling, which some are hailing as the next $15. Murray voiced initial support in his State of the City address last February. But the chamber is pushing against it, arguing that it effectively handcuffs business managers.

How real is the tension between the mayor and local business leaders? Maud Daudon’s message to business leaders to push back against Murray’s proposed tax should be some indication. But there are rumors that the clash has at times been far more intense than that .

According to a story circulating within the business community, Daudon and David Watkins, manager of the Inn at the Market, were invited to a March 23 meeting at the mayor’s office to discuss downtown crime. Several people close to the story, who asked to remain nameless because of their close ties within the city, say the topic turned to the question of how to fund Murray's proposals for expanding OLS and hiring more police officers. When Murray brought up a potential tax on business, Daudon resisted the idea, alluding to the chamber's support for the mayor's initiatives, and suggesting that the business community’s enthusiasm for his agenda had its limits. Murray reportedly asked her to leave.

Crosscut has not received comment from anyone in the room at the time. The chamber and Watkins both declined to comment on a private meeting, so it has not been confirmed. Kelly wrote in an email, "The mayor continues to benefit from open communication and a productive relationship with Maud."

Indeed, Murray was invited to the executive meeting after the rumored blow-up, so clearly has maintained communication with Daudon. He will also travel to China with chamber next month.

But there has been past tension between Murray and the chamber (Daudon, a member of Murray’s Inequality Advisory Committee, assembled to create the $15 proposal, was one of three members who did not vote “yes” on the final proposal). And Murray’s temper is, by now, well known. And whatever words have been exchanged between the two, business taxes appear to be off the table.

With the $15 minimum wage, Murray managed to get what he wanted while maintaining a mostly positive relationship with the chamber. As secure scheduling rounds the corner, it will be worth watching to see how far that relationship will stretch.

In the end, it boils down to this: Has Murray reached the limits of progressivism that business can reasonably support?