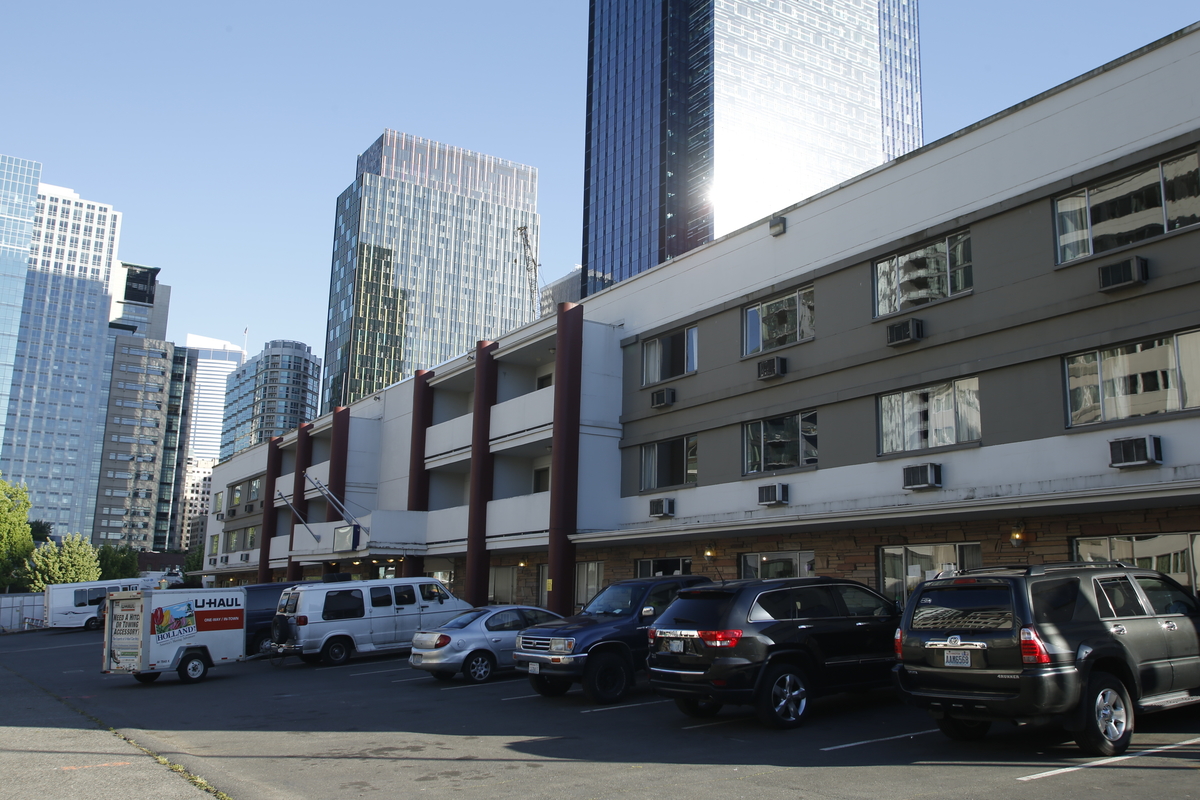 When Amazon donated an empty South Lake Union hotel for use as a homeless shelter, it was investing in a model that Mary’s Place, the service provider, has perfected: turning vacant or transitioning buildings into temporary shelter.

Amazon owns the onetime Travelodge for the property, not the building; it plans to redevelop the space in the next year. For now, the structure is a kind of road trip hotel, squatting beneath new development. Perhaps in the time of the World’s Fair it fit in, but in contrast to the glass-clad buildings surrounding it, its welcome has worn thin. There are other, similarly dated hotels in the neighborhood, all of which also seem destined for a wrecking ball.

But since the commerce giant has donated the building, it’s become more vibrant than it’s ever been. On a Wednesday evening, children of all ages run the length of the building, bouncing basketballs, playing chase. Mothers, children, and pets spill from their rooms and into the hallways. There’s great diversity among its occupants, far more so than Seattle at large. For dinner, they all eat beef stew in the building’s common room.

The Mary's Place approach is unique in the Seattle area — one that, considering the cutthroat real estate competition facing affordable housing and homeless shelters, floats the service provider with the current of the construction boom, not against.

It also precedes a philosophical shift just now getting under way in City Hall — prioritizing 24-hour shelters over the strict hours of many downtown facilities.

Juanita Duncan, 34, is a beacon of calm as her seven children orbit around her. She’s a single mother who came to Mary’s Place from Auburn. Keeping her family together, with a roof over their heads, has always been a struggle. In the area’s emergency shelters, she never felt she could bring all of her children, so had to seek help from her sisters and mother.

She found a permanent space in Auburn with the help of Solid Ground, but it was moldy and wet and falling apart. Although she had shelter, she was still unemployed and her mental health was on the fast decline.

“When I was at home, I was just in the house all the time,” she says. The space was condemned and, again, she was facing homelessness. It was a sad time for both Juanita and her children. Reflecting on it, Juanita’s 11-year-old son Keondre, playfully called “Russell Wilson” for his light skin and curly hair, begins to cry.

She knew about Mary’s Place from the organization’s day shelters, and as she was leaving her shelter in Auburn, she heard the news about Amazon’s donation. She gave the organization a call, and in days, all seven of her children were reunited under the Travelodge’s roof.

“Being here in this environment helped a lot getting myself together, finding my boundaries, helping me understand what I can and cannot do,” she says. “I came here and there were people saying get up, move, get myself together.”

Juanita begins her job at CenturyLink next week.

Mary’s Place began in 1999 as a resource center for homeless women. Since then, it’s since evolved into something more flexible and family-focused.

In addition to its two day shelters — in downtown and north Seattle — are six temporary living quarters, housed in second-hand buildings that are often between tenants or awaiting demolition or redevelopment.

It’s an approach that literally evolved out of empathy, says Mary’s Place communication manager Linda Mitchell. Closing the day centers’ doors and turning away families was “heartbreaking” to staff,  so the organization began reaching out to churches to provide places where families could sleep and stay together.

The approach began spilling beyond churches, beginning with a building in Belltown, owned at the time by property management company Columbia West. Now, building acquisition is the core of what Mary’s Place does.

They’ve partnered with real estate company Kinzer in their hunt for new space, new donations. Offices from Pemco and Vulcan and the old North Police Precinct Station have all housed families as they try to get back on their feet. The buildings turnover about every year, and the organization has strived to replace them on an ongoing basis.

And since the Amazon splash? “In the week after we launched,” says Hartman, “it’s been a building offer a day.”

In addition to local business interests, the City of Seattle has also taken great interest in Mary’s Place, funneling resources its way amid the homelessness State of Emergency declared last fall by Mayor Ed Murray.

Seattle officials have begun to pivot toward 24-hour shelters as a new approach toward the issue. This is modeled after San Francisco’s Navigation Center, which houses people so they can devote their energy away from survival and toward creating stability in their lives. Murray visited in early March and Councilmember Sally Bagshaw chaperoned a trip of a dozen or so elected officials and policy wonks just last week. In an e-mail, Bagshaw called it the “Next Great Hope.”

While it’s not a condition for their housing, there’s an expectation that families in Mary’s Place shelters will work with staff to transition out as quickly as possible. For as comfortable as the Travelodge feels, Mitchell is careful to say it’s not housing; it’s a shelter.

The transience of the Mary’s Place occupations puts a ticking clock on the residents’ time there,  though they’ve never had to put a resident back on the street. Most families in their shelters are dealing with temporary struggles — eviction, medical burdens, unemployment. They’re usually well poised to be placed into housing, with 60 days being the average stay for a family. In the event a family hasn’t found a home, Mary’s Place will place them in a different facility.

Money will always be a squeeze as Mary’s Place builds out its model, although they just matched a $1 million donation from Amazon CEO Jeff Bezos. But what about buildings?

According to Wendy Shark at the recently anointed Department of Construction and Inspections, it’s near impossible to calculate the exact number of vacant homes or commercial space in Seattle without going directly to the owner. Further, there’s not any great way of knowing how long those buildings stay vacant. In the hubbub of people camping in the old Seattle Times building, Times’ columnist Danny Westneat wrote about an effort to photograph abandoned buildings as advertisement to the unsheltered.

But according to Shark, we do know that there are currently 654 outstanding demolition permits in Seattle. Those expire within 18 months, though it’s relatively easy to apply for an extension and there are no limits on renewals.

That’s not to say there are 654 shelter ready buildings. But in coming months and years, there may be plenty that Mary’s Place and the city might put to a final, higher purpose.