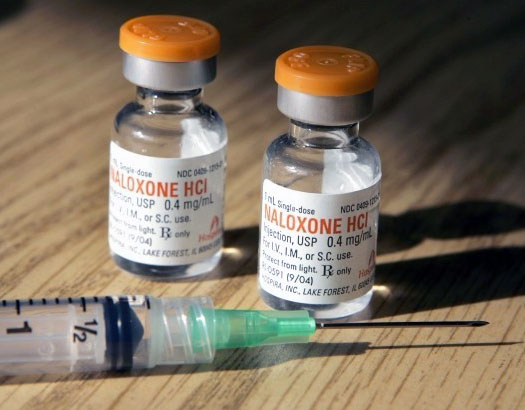 If there was an easy-to-use drug that virtually brought people back from the dead, wouldn’t you keep it close at all times? Naloxone – which can reverse the effects of a heroin overdose – has been in the limelight lately, as the Seattle Police Department experiments with equipping bike officers with the drug. But not every Seattle institution is jumping at its adoption.

On the evening of April 18, two Seattle police officers found a 21-year-old woman in a Westlake bathroom stall. According to the department, her skin was pale, her breathing belabored, and someone was administering CPR to her. She was dying of a heroin overdose.

In all three cases, officers administered a quick dose of naloxone, and the victims were sitting up and talking in minutes. The three encounters will be used in an upcoming study at the University of Washington, in which Dr. Caleb Banta-Green, an Associate Professor at the university’s school of public health, will work with SPD to evaluate the impact of officers carrying naloxone. If the results of the experiment are positive, SPD could distribute the drug to the whole department.

But while the study only started in March, excitement for naloxone is mounting, especially in the face of a heroin epidemic. According to Sarah Peddicord, spokesperson for the U.S. Food and Drug Administration, there’s been a 243 percent increase in local naloxone providers since 2010. With the recent FDA approval of a naloxone nasal spray last fall, that number seems poised to go up.

For many, the next frontier is the school system. The National Association of School Nurses (NASN) recommended last summer that “school nurses…should facilitate access to naloxone for the management of [opioid pain reliever]-related overdose in the school setting.” Some states, like New York, Massachusetts, Delaware and Vermont, encourage schools to stock the drug; Rhode Island requires it. Drugmaker Adapt Pharma is going on a publicity blitz, offering the product free to high schools across the country. And media around its use in schools is growing, including a long piece from former All Things Considered host Melissa Block about naloxone in a Pennsylvania town.

Seattle Public Schools, however, does not stock naloxone. For the time being, there are no immediate plans to do so.

But if naloxone is such a lifesaver, then why not? The answer is complicated.

As cheap heroin floods the U.S. on the heels of a long-term obsession with opioid pain medication, heroin use has been dubbed an epidemic. The label isn’t without controversy (some argue it’s only labeled an epidemic because it’s hit the suburbs), but the conversation around heroin use has skyrocketed, with President Obama recently allocating $1.1 billion to address the issue.

Locally, Mayor Ed Murray has repeatedly blamed heroin for contributing to the exploding homeless population. He and King County Executive Dow Constantine recently convened the Task Force on Heroin and Prescription Opiate Addiction, made up of political and health officials.

Two representatives from Seattle Public Schools — Assistant Superintendent of Operations Pegi McEvoy and Executive Director of School Health Patricia Sander — are members of that task force, a recognition that schools must play a role in fighting heroin use.

“Whenever we are talking about health issues that might impact either our students or the families of our students, we want to be at the table,” says McEvoy. What schools will do with that spot at the table, however, varies by district.

In 2015, the Washington State Legislature passed a bill that expanded access to these so-called opioid antagonists, allowing a broader range of licensed health practitioners and law enforcement agency to distribute them. With the proper prescription or standing order from a doctor or nurse practitioner, school nurses can administer the medicine to any student experiencing an overdose.

But there is no specific statewide recommendation that schools should carry the drugs. The Washington State Department of Health only says, “The school or school district should establish policies and procedures for the management of opioid related overdoses in the school setting as part of the school emergency response plan.”

As early as summer 2014, board members of the National Association of School Nurses started discussing whether naloxone should be a part of schools’ response plans. While NASN President Beth Mattey can’t point to data on an increased number of heroin overdoses in schools, she paints the epidemic as an enemy at the gates.

“Districts recognize that there is definitely a problem with opioid use in our communities and it could easily move into schools,” she says.

For Mattey, the value in having naloxone on hand is equal to having a heart defibrillator or epinephrine. “We want to have the tools available to save a life,” she says. “We want to be prepared.” The point is well taken — emergencies are rare, but better to be prepared. But the reality is that setting up a naloxone program in a public school is not without challenges, and the bandwidth for intervention is extremely limited in public settings.

The opioid problem does not necessarily warrant using response resources for naloxone. According to Dr. Banta-Green, only 30 of 3,305 overdose deaths in King County since 1997 have been individuals aged between 14 and 18. In the schools, McEvoy says they have had no recorded overdoses and, despite talk of an epidemic, school nurses have not been reporting higher opioid usage.

Considering the relatively rapid response times from local first responders, it's not so clear that naloxone pencils out logistically.

Additionally, McEvoy says Seattle school nurses also take recommendations from state and regional nursing associations, none of which have recommended stocking naloxone. “Our focus is primarily on working towards the prevention…so that we have less people who become opioid involved,” says McEvoy.

Banta-Green seconds that approach. While he calls naloxone “a great 90-minute fix for an opioid overdose,” he says Washington’s limited resources should be prioritized toward education, outreach and treatment with buprenorphine and methadone, both of which can help kick addiction.

Seattle schools have no immediate plans to start carrying naloxone, but that’s not to say it wouldn’t in the future. “We always consider everything,” says McEvoy, “so it’s an option on the table. As we look at trends and work with the professionals, if that starts to become a recommendation that we should start stocking it, then obviously we would consider it, yes.”