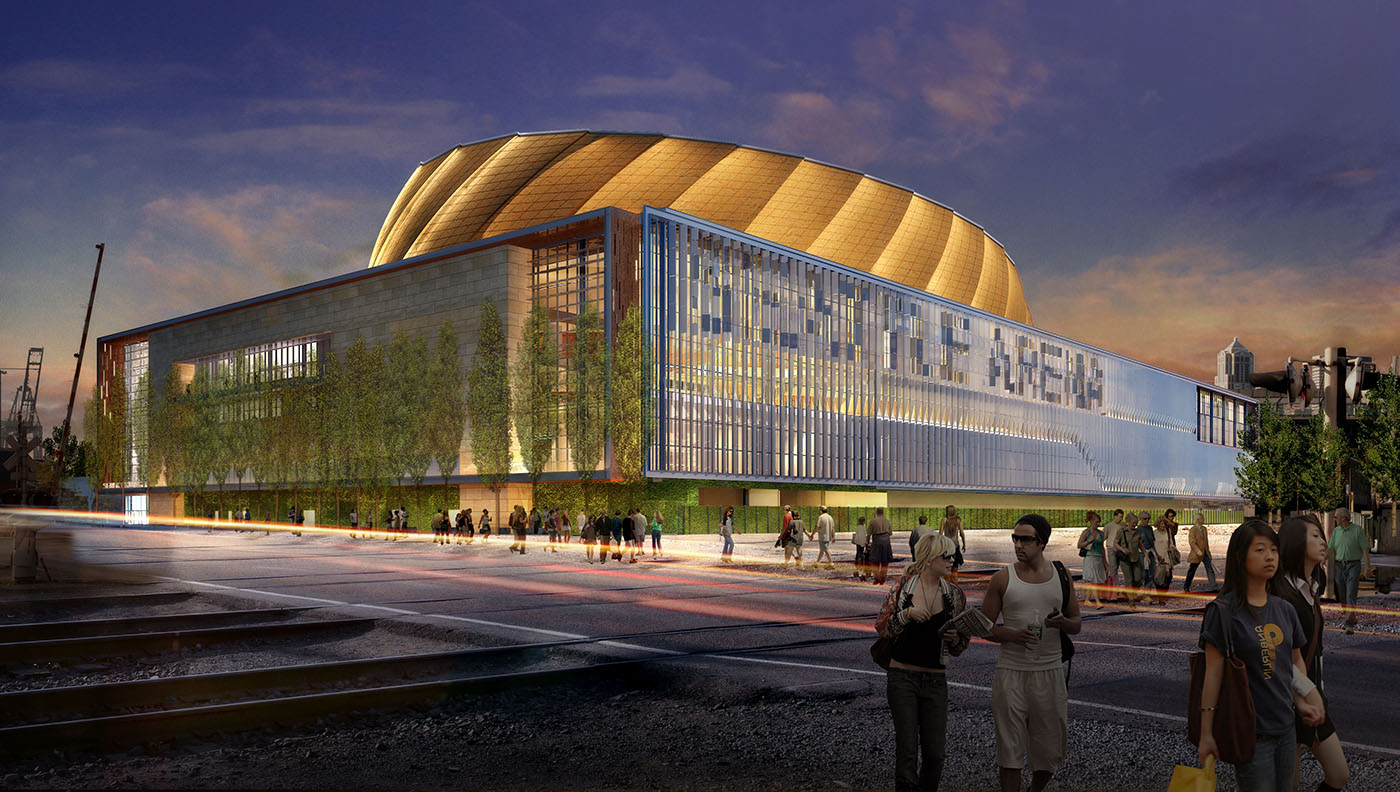 Seattle City Council votes are very rarely a surprise. But coming into Monday’s meeting, councilmembers Lorena Gonzalez, Debora Juarez and Kshama Sawant had hardly murmured a peep to indicate whether they would favor or oppose vacating a portion of a major city street to clear a way for a new arena.

One by one, all three voted against Occidental Avenue in SODO. So to the great joy of port and maritime representatives in City Hall and to the heartbreak of Sonics fans dressed in yellow and green, the vacation failed 5-4. The once-upon-a-time savior of basketball in Seattle, Chris Hansen, is now without the square footage to build what could’ve been home to the Seattle SuperSonics version 2.0.

Monday’s decision has been years in the making. The vote finally came to the Council with 18 months left on the agreement between the City of Seattle and Hansen, which split the cost of the arena. As a result of that agreement, the city is obligated to work with Hansen on the project and restricted in exploring other options for NBA and NHL teams.

That MOU will expire in late 2017, at which point all public money will be off the table.

Hansen has always had his sights on the SODO property, but needed a portion of Occidental to make it work. The Port of Seattle has been consistently and completely united in its opposition, arguing that the project would cause traffic congestion and jeopardize the functionality of port operations. Port commissioners John Creighton and Fred Felleman both testified in opposition to vacation, Creighton calling the traffic impacts “unmitigatable” and Felleman accusing the City and the Mayor of supporting “the gentrification of SODO.”

Proponents of the arena – often in retro Detlef Schrempf and Shawn Kemp gear – all but pleaded with the council to approve the vacation, arguing rationally that the traffic impact will be minimal, and emotionally that they just want the Sonics back.

According to Councilmember Mike O’Brien, the vote came down to balancing public trust, land use impacts and public benefit. No councilmembers quarreled with this assessment. The question, however, was whether vacating Occidental at this time was actually to the public’s benefit.

For the four councilmembers who voted in favor – O’Brien, Bruce Harrell, Rob Johnson and Tim Burgess – the potential benefits outweighed potential drawbacks. O’Brien argued that any effects on the Port might be could be mitigated. In approving the street vacation, the hope was that if an NBA team came up to move, the city would have its location ready to go.

But the lack of a clear path to obtaining an NBA team is what killed the vacation. NBA commissioner Adam Silver has said that even a “shovel ready” arena would do little to spur the NBA into expanding in Seattle.

“Why would we put family wage jobs at risk when there is no team?” said Councilmember Sally Bagshaw, the most vocal opponent to the vacation.

Councilmember Debora Juarez echoed Bagshaw’s point with similar language. “For me, this weighs a non-existent NBA franchise against an existent, longtime civic partner,” she said. "You can always build an arena...but you cannot build another deep water port."

While Bagshaw, Juarez and councilmember Lisa Herbold were unequivocal in their opposition, councilmembers Lorena Gonzalez and Kshama Sawant were as unsure as they’ve ever been. Both described their “struggle” back and forth on whether to approve the vacation.

For Sawant in particular, this vote put her in an awkward position. On the one hand she detests the Port of Seattle, quoting U.S. Attorney Mike McKay who called it a “cesspool of corruption” in 2008. She firmly rejected the "bureaucracy" of the Port's traffic assesment. But on the other hand, the idea of subsidizing ultra-rich Hansen certainly does not sit well with her message.

Instead, she framed the debate in terms of port workers and sports fans, which she said she hated pitting against one another. In the end, she went with the workers. Confused port employees applauded.

Gonzalez was put in the unenviable position of casting the last vote, and so appeared to have the entire fate of the Sonics and/or Port in her hand. Fair or not, the atmosphere was unlike any council meeting in recent memory. After walking the crowd through her own back and forth struggles, she too voted no. Opponents exploded; Sonics fans wept.

“I’m delighted and thankful to the City Council for recognizing the long term and current importance of our relationship,” said Commissioner Felleman after the vote. “This is something that will pay dividends to all of us in the future. We look forward to working with them to find a more appropriate place for the Sonics.”

Had the vacation been approved, several lawsuits from the port and labor community were poised to hit the city. Felleman said he was thankful that would no longer be the case.

“We’re not stopping,” said a disappointed Kris “Sonics Guy” Brannon, an arena advocate who’s been to over 4,000 Bring Back Our Sonics events over the last eight years, who regretted not doing more to persuade the councilmembers. “We still have 18 more months on the MOU, so we’re going to do what can to bring back the Sonics to the City of Seattle.”

Immediately following the decision, Mayor Ed Murray put out a terse statement. “I firmly believe that a new arena will be built that brings the NBA and NHL to our region," he said. “The City’s past actions contributed to the Sonics leaving Seattle. Today’s Council vote makes it less likely that the NBA will return to the City of Seattle."

With Occidental off the table, Key Arena will almost certainly come back into the discussion. While Hansen would have to be a part of those conversation for the next 18 months, by 2018, the City will have a little more flexibility in deciding what it would like to do for an arena.