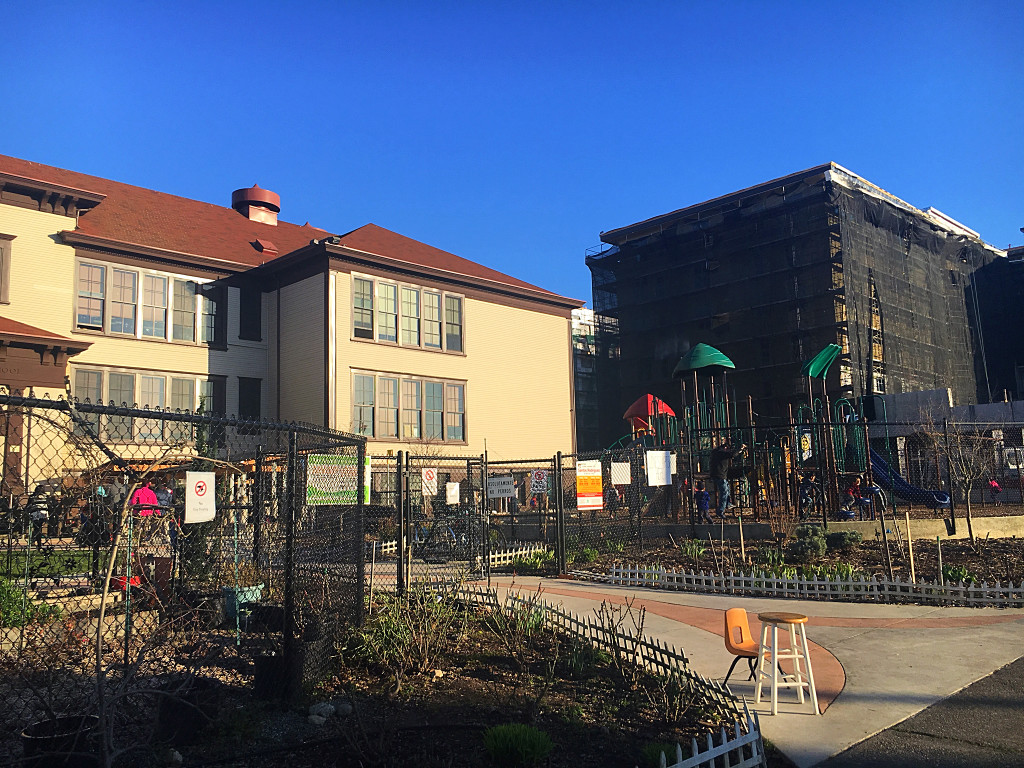 El Centro's biggest affordable housing effort is the Roberto Maestas Plaza, but more projects could be ahead under a new partnership with Forterra.

An organization best known for saving large natural areas in rural areas is taking on a new task: affordable housing in the city. Forterra, formerly the Cascade Land Conservancy, is launching a new partnership to address housing issues with the social service and cultural organization, El Centro de la Raza.

Forterra unveiled the collaboration at its annual fundraising breakfast recently in front of 1,400-plus people, many of whom were presumably at least a bit surprised.

It’s certainly a change from what Forterra has done, brokering large purchases of undeveloped lands and development rights in some of the Puget Sound region’s major efforts to protect open space and forest lands. Among those projects have been the state's purchase of 50,000 acres in the Teanaway River Valley near Cle Elum and negotiating the deal that saved the old Glacier site on the shore of Maury Island as a King County natural area, rather than a massive gravel mine.

Is this new commitment to affordable housing a stretch? Not at all, says Forterra's executive vice-president, Michelle Connor. "It's natural. If we don't do something about the quality of life in urban areas," Connor says, "we're going to fail."

If, like Forterra, you take a 100-year view, virtually all remaining unprotected natural areas and agricultural land in Western Washington will be toast unless almost all growth takes place in existing cities and towns. So, Forterra has long seen a legitimate interest in urban development that is attractive enough to make people choose to live there. This new enterprise reflects a related truth: People won’t stay in urban centers unless they can afford the rent.

While Forterra won’t get into development, Connor says, it already has expertise in real-estate deals tied to conservation. Forterra envisions buying land strategically within cities and banking it. Community organizations and housing non-profits could then do the development.  For instance, Connor says, "I could imagine us securing property near transit."

Local organizations, she says, are well-placed to make the best choices. And the group wouldn't necessarily need development money in hand, either, since Forterra could, she says, “buy and hold property on some basis while a community organization figures out a funding strategy." By looking far enough ahead, in fact, she believes Forterra could do for affordable housing what Paul Allen did for South Lake Union’s development.

While Conner was thinking seriously about urban real estate in recent years, El Centro de la Raza officials were doing the same. And both groups were working in Tukwila to find out what the community wanted from transportation, explains El Centro's executive director, Estela Ortega.

Ortega thought Forterra could help answer a big question: "How do we save land for the betterment of people?"

"The community wanted to see affordable housing," Ortega says. "Rents were no longer affordable for our community." And that meant the whole community: "No longer is it just people of color," she says.

El Centro had already done a little affordable housing, but an opportunity to do something larger arose when Sound Transit decided to build a light rail station on Beacon Hill, near land that El Centro already owned. Here was a chance to assemble financing and zoning for transit-oriented-development.

The result is the $45-million Roberto Maestas Plaza , a mixed-use project with some 110 units of affordable housing on 16th Avenue South, near the station. When applications opened for the apartments, nearly 1,000 people were waiting in line. Some had spent the night. It was "heartbreaking" to see the people who had gotten there too late, Ortega says. The lucky ones will being moving in next month. The open plaza will invite the whole community in with vendors and a big outdoor TV. "It was a beautiful opportunity," Ortega says.

She says El Centro wants to do more affordable development. The group will look again at its own neighborhood, Beacon Hill, but it may also look in south King County, where Ortega says that — pushed by rising rents — more than half the area's Latino residents now live.

If El Centro wants another big project, "we could buy that property today and hold if for them," Conner says. Her organization is willing to look at a range of sites, but all else being equal, it will look at larger tracts. "A transaction on a small parcel [requires] the same effort as a transaction on a large parcel," she explains.

Organizations that develop land Forterra has acquired will likely have a variety of ideas. But the housing will have to be affordable, and there will have to be some environmental component, even if maybe that just means including an urban garden, she says.

Connor refers to maps that compare life expectancies among census tracts in King County. In general, people who live on Mercer Island or in Medina or downtown Seattle survive a lot longer than who live in White Center or farther south. The right address may be worth almost a decade of extra life.

Under those circumstances, Connor says, affordable housing isn't just a logical part of a long-range land-use strategy. It's something more: "We have a moral obligation to think about what role we play."