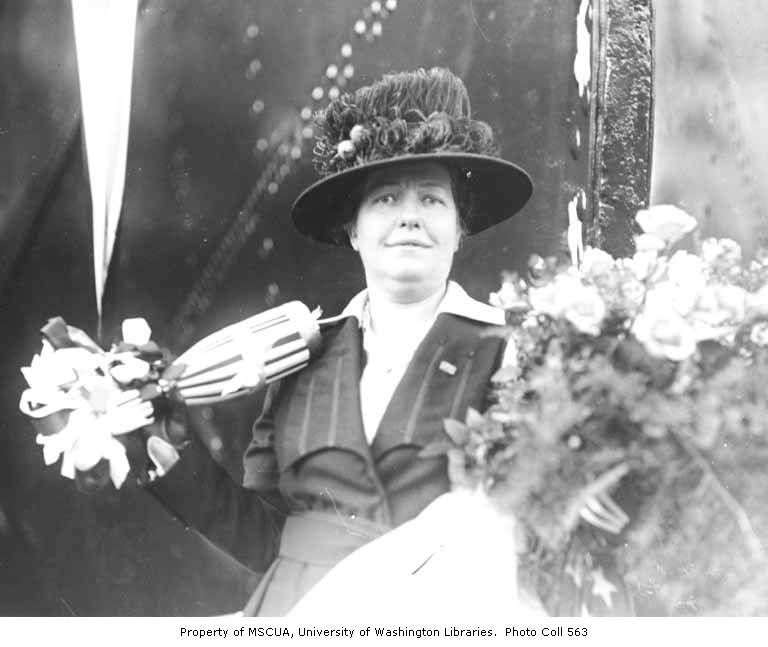 No, not that Bertha, the original Bertha.

Where is Seattle’s woman mayor?

Seattle has elected exactly one female mayor in our history — Bertha Knight Landes. She took office in 1926 with the promise to clean house at City Hall with a broom. It needed it.

She was the first woman mayor of a major American city. She served one two-year term and was defeated for re-election for keeping her promise: Seattle has never had much tolerance for municipal housecleaners. She was beaten by a man with no political experience or civic soul, a tool of the business community. He was so bad that he was recalled a few years later. Still, he was in office longer than Landes.

Not only was Bertha Landes the first and last female mayor of Seattle, but no woman has even appeared on the final top-two ballot since her failed re-election bid in 1928. It’s been nearly 90 years since a woman was in the mayoral finals. That’s more than double the Mariners’ World Series drought.

People have speculated about possible reasons. One theory is that for all the wear and tear of running for mayor, a woman politician is smarter to shoot higher: Our state has elected multiple women to the governor’s office, the U.S. Senate and Congress. The Seattle mayor’s office is a notorious political dead-end — the last time a mayor from Seattle went on to win higher office was in 1940. Ex-mayors can still play a positive civic role, but electorally they seem to have climbed the last rung of the ladder.

As to women, in the words of Eric Scigliano who looked at the paucity of women mayors for Crosscut in 2013, “They’ve got better things to do.”

Maybe so. But events this year suggest that things really need to change.

Nicole Brodeur of the Seattle Times, among others, wrote about the ugly reaction by some men to the city council vote against a street vacation for the SoDo Arena. That vote unleashed a level of misogynistic hate-speech that stunned us all. It was ugly and violent.

Brodeur quoted Mayor Ed Murray’s righteous outrage: “Seattle is better than this,” he said. Brodeur responded, “With all due respect, Yerroner, we’re really not.”

We like to tout ourselves as the most progressive city in America, but really? Ninety years isn’t an accident.

It’s not as if women haven’t tried, Kate Martin and Jan Drago, in recent years for example, ran for mayor but they didn’t make it to the finals. The formidable Phyllis Lamphere ran in 1977 but didn’t make it through the primary either, despite being considered a front-runner at one point. She would have been a good mayor.

In 2013, Lamphere reflected back on the challenges for women running for the position. “There are good reasons why Seattle hasn’t had a woman mayor,” she wrote. “The campaign is grueling. The loss of privacy is especially hard for a woman with a family. Women often find it harder to raise money for themselves than for a cause or project they believe in. And we are judged differently; any miscue can be devastating, and the faux pas of one female public official can taint us all.”

We’re also reminded daily of the challenges for women in watching the presidential campaign of Hillary Clinton. The expected GOP standard bearer, Donald Trump, calls women he doesn’t like “pigs” and belittles women in politics and the media. (He adores models, however.) Hillary has also been the target of sexist social media from a subset of Bernie Bros on the left — Sanders has repudiated them.

If some feel free to dump hate speech on Seattle’s majority woman council over a basketball arena street vacation, our politics are not much better than what we’re seeing nationally.

We need to push back.

We need to elect a woman mayor. Soon. Period. We need to shift the status quo. We need to openly reject the politics that have created the absurdity of our gender drought, something that’s a symptom of a pervasive cultural and political problem.

There is no lack of talent and potential candidates in Seattle. You can draw up your own list.

This is no knock on Mayor Murray, who has said he loves the job and plans to run for re-election.

This is not about punishment, or atonement. It’s about growing up. It’s about re-directing a city that wants greater equality and social justice — or at least talks a good game.

How would Murray feel if he was the last gay Seattle mayor for a century?

If we really want to live up to his words — “we are better than this” — we better start acting like it.