Light rail: How our past shapes the choices 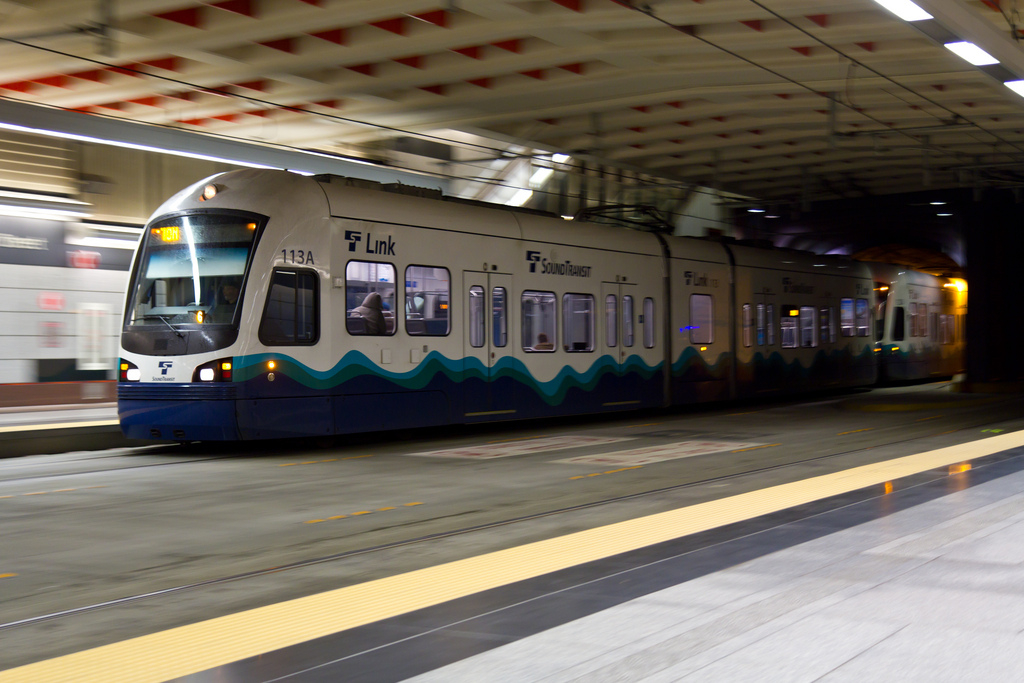 A Sound Transit train in the downtown tunnel: Just a taste of what's to come?

Sound Transit staff have been running into a lot of public unhappiness recently. Roughly 240 people who showed up for an Everett meeting, for instance, mainly to express frustration over the pace of light-rail construction to their town. Sound Transit is currently selling the third phase of their regional light rail project, a $50 billion proposal going before King County voters this November. The proposed “Sound Transit 3” plan is a long-term one, with Link light rail not expected to serve Everett for another 15 to 25 years.

At the meeting, an organization called the Economic Alliance of Snohomish County passed out T-shirts with the words “Light Rail to Everett … In Our Lifetime." But this isn't the first time Seattle has tried to build a modern mass transit system. Or the second. Or the third. For over a century, business leaders, politicians, engineers, planners, developers and voters have stumbled over building the kind of mass transit system which some other cities take for granted.

Sound Transit 3 could be different. The agency is already building multiple rail lines north, south and east on time and budget — at least by current schedules. No organization in Seattle has managed to do that in almost a century. But, with some voters urging faster action, a look at history shows that the Puget Sound region could have had a much more extensive rail system decades ago if past generations had acted differently.

In fact, so-called “interurban” trains were actually shuttling passengers from Everett to Tacoma as far back as 1911. Within Seattle, streetcars and cable cars could take you to virtually any neighborhood between West Seattle and Green Lake. These privately owned and operated systems largely ran through city streets in mixed traffic, sharing the roads with autos and bikes. They weren’t subways, but they were better than what we have now.

That same year, Seattle’s municipal planning director Virgil Bogue, a colleague of the famous Olmsted brothers who designed Seattle’s parks, submitted his “Plan of Seattle” to the mayor and council. In it, Bogue proposed upgrading that surface network into a 90-mile regional rail system separated from street traffic.

Without a serious mass transit system, Bogue argued that Seattle’s unique geography would create a “tendency to develop congested, undesirable, and unhealthful districts.” The voters disagreed, overwhelmingly rejecting the plan in 1912.

“As sometimes happens in Seattle it appeared to the voters and many in the community as being a little too grand for Seattle,” said Museum of History and Industry Executive Director Leonard Garfield. A political ad at the time said, “Anybody can plan $100,000,000 worth of streets, but it’s another thing to pay for it.”

The “Plan of Seattle” was shelved. By 1937, the interurban rail network had gone bankrupt. By 1941, Seattle’s streetcars were gone too. Both systems were private and couldn’t survive competition from state funded roads like Highway 99.

“We certainly had a leg up on a regional transit system, and we pulled that leg out from under us,” says MOHAI’s Garfield. “That had a price tag for which we are paying,”

Transit proponents went back to the voters with multiple plans to build new rail systems in 1952, '58, '62, '68, and '70 to create a “figure 8” of rail service around and across Lake Washington. (Infamously among local transit supporters, the last two votes led to Atlanta rather than Seattle getting federal money to build a subway system.)

Some of the measures failed to get a majority. Others got over 50 percent support but, in an oddity of state law that is relevant to Everett's hopes for quicker construction, were blocked anyway.

“The problem was that they took the path that Sound Transit has declined to take, which involves trying to bond the majority of the project early in the construction effort so that they could build it quickly,” says Mark Hallenbeck, director of the Washington State Transportation Center. In Washington state, transit projects that want to sell more bonds early to build faster must receive more than 60 percent support at the ballot box.

If Sound Transit wanted to build more quickly, it could, but state law won’t let it unless 60 percent of voters supported the measure this November. Proponents of ST3 aren’t willing to take that risk.

In 1996, the “Sound Move” ballot measure only required 50 percent support and it passed. Sound Transit was created and tasked with building light rail from Northgate to Sea-Tac Airport. The next year, another ballot measure passed in Seattle calling to expand monorail service to more Seattle neighborhoods. Both quickly ran into financial troubles.

City voters actually approved ballot measures to build a monorail on multiple occasions, but cost estimates went from $1.75 billion in 2002 to $11 billion in 2005. The plan was scrapped.

At Sound Transit, the financial conditions began to improve after Joni Earl became CEO in 2001, and the agency moved forward with a shorter light rail line than had been outlined to voters. In 2008, voters approved Sound Transit 2 which authorized the agency to fund and build rail from Lynnwood to Federal Way and Bellevue. Seattle’s first line, the shorter version of the one approved in the 1996 vote, opened one year later from Downtown to the Seatac area. Two months ago, the “University Link” extension opened to higher than expected ridership.

Within Seattle, we have two new streetcar lines, and the city has plans to expand both.

“Those lines are very similar to the electrified rail system that Seattle had in the early 20th century. They even replicated some of the actual routes,” says Garfield.

Sound Transit’s rail system is much like the old interurban network with some of Virgil Bogue's visions of 105 years ago.