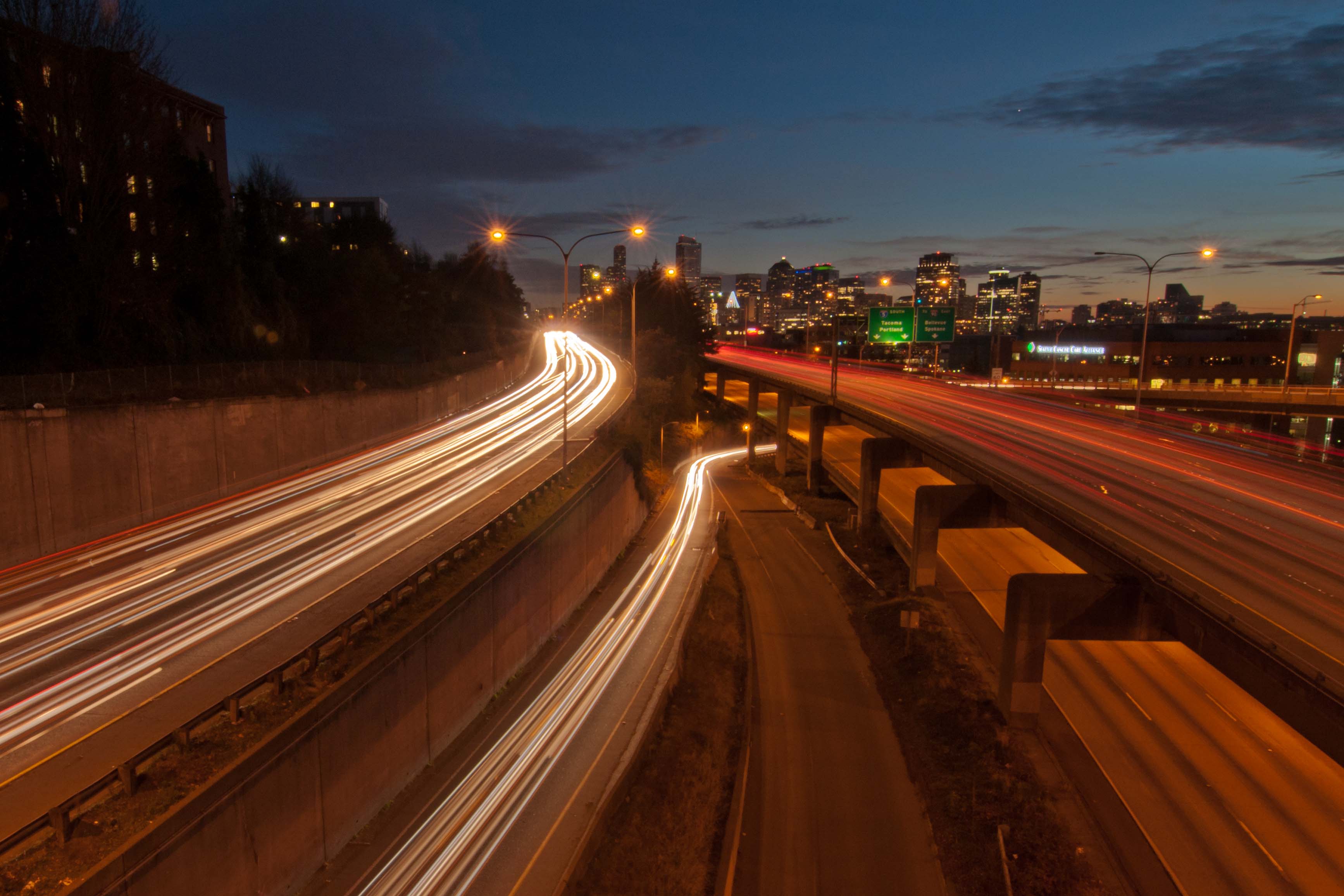 Brier Dudley of the Seattle Times has just “had it up to here” with the “War on Cars.”  His frustrations came pouring out in a recently published screed in the Seattle Times, catalyzed by his discovery that Seattle will no longer measure the effectiveness of a street by how many cars it carries.

I hate to break it to Dudley, but Seattle — like most big cities — gave up on that a while ago. I discovered this in the early 2000s, when my neighborhood was pushing the city to reevaluate the traffic light on 85th and Greenwood. We hoped that by making it more efficient we could reduce cut through traffic on residential streets. We learned the intersection was operating at LOS (Level of Service) D, and was about to downgrade to F. That sounded pretty bad, until the traffic engineers admitted that they had given up on trying to make urban intersections operate at LOS A. Too many cars, they explained.

The Seattle Department of Transportation made some changes to improve the intersection’s efficiency, but they knew that 85th and Greenwood would never meet national performance standards written for massive suburban intersections.

Becoming LOS A, the gold standard for auto movement, would have meant tearing down the historic four corners of Greenwood to make room for turn lanes, and maybe more through lanes. That would have been a great way to ruin Greenwood, and no one would seriously propose or consider it.

The discussion opened my eyes to the obvious — streets aren’t just for moving cars. Or even for moving buses, bikes, and people on foot. They are places that support the social and economic activity of a community and should be designed that way.

Let’s do a thought experiment. Think of a place optimized for auto movement. No intersections, pesky pedestrians, or annoying bikers.  Just wide lanes, gentle curves and generous shoulders. Got it yet?  It’s called a highway, and they’re great for going long distances fast. They have a role between our cities, but if your car breaks and you have to walk, they’re pretty hellish.  Even in our cities, there’s nothing there. No stores, restaurants, churches, theaters, parks or people -  just traffic thundering by. The exact opposite of a city street, in other words.

One of the worst things we can do is take perfectly good city streets and use outdated LOS standards to optimize them for car throughput. Aurora, Rainier, MLK, Lake City Way, Delridge, 85th Street, 15th NW are all places that can feel more like the side of a highway than a thriving place. Retail and housing struggle. People on foot look out of place. Crime and urban blight is more likely. That’s the price you pay to rush commuters out of town.

In contrast, the best neighborhood business districts tame the cars coming through — just like Columbia City and Lake City are trying to do. As a result, the streets support all sorts of community needs. Strong retail, sidewalk cafes, kids walking to school, art walks, even tourists coming to visit. The streets are so great that they even ban cars once in a while (the horror!) to support parades and festivals.

Dudley claims that our economy suffers when we fail to optimize for cars, citing the alleged millions lost to traffic delays. This measurement illustrates just how car-centric we have become.  Has anyone measured how much time pedestrians wait for cross signals and then attempted to attach a dollar figure to that? Or how much time bus riders spend stuck waiting for cars to let the bus back into traffic? Or the delays caused to bikers taking roundabout ways to find a safe route?

By the time we added it all up the city would be drowning in red ink, our balance sheets tattered by the fact that we have so many people traveling in so many different ways.  Yet the exact opposite is true — those who dive deep into the analysis find that traffic delay is associated with more jobs closer to where people live and that’s a good thing.

The popularity of many of our most congested streets suggests a better way to measure their performance. How about tax revenue per square foot of asphalt?  Downtown Seattle, despite its crowded streets and expensive parking, is the supreme champion of the Pacific Northwest in this regard. I’ll put Greenwood, with its multistory mixed use buildings and narrow streets, against any strip mall fronting a six lane shrine to automobiles.  This is no small matter as we struggle to keep that asphalt from falling into disrepair.

Over at Publicola, Josh Feit does a great job of demonstrating that arts attendance isn’t plagued by congestion, as claimed by Dudley, instead revenue and attendance is increasing. The arts are most successful in our densest places because that’s where the action is.  Similarly, creative chef Tom Douglas claimed that increases in parking rates would hobble his businesses.  Since then he has opened numerous successful new restaurants. Busy streets start to look like a metric of success, not failure.

When we think about streets this way, SDOT’s proposal to measure streets by how few cars are on it also misses the mark. It puts cars and mobility at the center of the discussion and prevents us from more insightful metrics about the role of streets in the urban environment.

I’ve suggested financial and cultural metrics already, but there are plenty of other metrics of success.

How about “zero deaths and serious injuries”?  That’s been city policy since 2012. Right now about as many people a year die in traffic as are murdered. Yet all too often we are told we cannot make streets safer because it would harm traffic too much.  That’s why the city does not do “road diets” on streets carrying more than 20,000 cars a day, even though these safety redesigns have dramatically reduced deaths and serious injuries. Mobility trumps safety, often with tragic results.

Here’s another metric — public health. People living in close proximity to busy roads breathe more “ultrafine” pollutants, increasing the risk of cardiovascular disease. Walkable neighborhoods reduce the risk of obesity and diabetes.  And it is widely accepted that economically disadvantaged and minority populations share a disproportionate burden of air pollution exposure and risk.

Or maybe we might consider global warming.  Over 60 percent of Seattle’s emissions are from the transportation sector. I’m looking forward to more electric cars, but walking, biking and electrified transit are a major part of the solution, as well as helping folks live closer to jobs and services.

This is why the “war on cars” rhetoric is so counterproductive. Reducing the discussion of a successful street to how well it moves cars is simply foolish. The real issues are about economic and cultural vitality, public safety, and our future.

When Dudley cools down from his latest bout with traffic and takes a look beyond the windshield of his car, he might see most folks aren’t out to get him. They just think there are some other important things to work on.