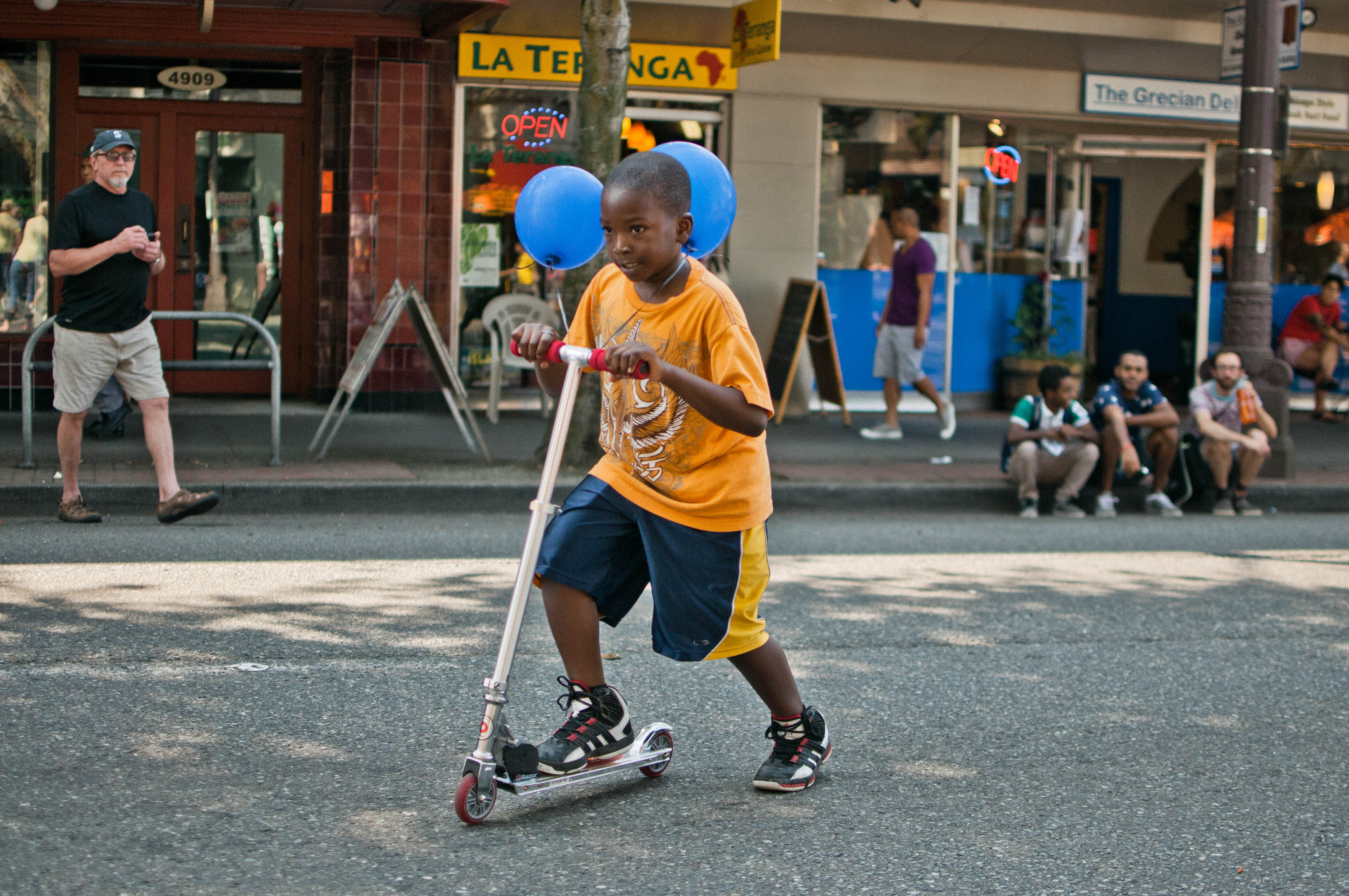 A child rides a scooter at Rainier Valley Summer Streets.

When Ubax Gardheere’s son was starting kindergarten, she made a tough choice. The single mother of three lived in SeaTac, worked in Seattle, and belonged to a community of Somali immigrants and refugees like her in south King County. But recognizing that the schools in Bellevue would better serve her children, she moved across the lake and away from her job, friends, and family.

“It’s something that I struggle with; I moved to a place without community or family support, just for the long-term benefits for my kids,” Gardheere says. “But I also spend a lot of time commuting that I would love to spend with them. And every weekend I am in south King County where all the resources and everything I need is.”

She doesn’t regret her decision. But Gardheere’s choice — between affordable housing and a reasonable commute; affordable housing and good schools, services, health; affordable housing and her community — is one Mayor Ed Murray hopes to address with his Housing Affordability and Livability Agenda (HALA). When he rolled out the HALA committee’s policy recommendation’s last summer, he said one of his goals was to eliminate Seattle’s “economic apartheid” that concentrates wealth in some neighborhoods and poverty in others (often outside the city limits).

The Mandatory Housing Affordability – Residential policy (henceforth MHA) is central to that goal. It is the residential component of the so-called “Grand Bargain” that helped the 28-person HALA committee reach consensus on policy recommendations. Known more commonly as “mandatory inclusionary zoning,” it requires for-profit developers to build rent-restricted units on site or pay an “in-lieu” fee into the city’s affordable housing fund. Housing policy experts consider it one of the best tools for creating mixed-income neighborhoods.

As Program Director for Puget Sound Sage — a progressive nonprofit advocacy organization — and HALA committee member, Gardheere helped push the policy as one of the 65 final recommendations.

But though MHA could create as many as 3,700 affordable housing units citywide, some advocates are concerned that the in-lieu payment option leaves too big a loophole for developers to build offsite, negating the opportunity to actually combat the city’s growing “economic apartheid” and to create neighborhoods that include people with a range of incomes and backgrounds.

In exchange for providing affordable housing onsite or paying into the housing fund, the crux of MHA is that developers will be able to build larger buildings. This theoretically provides them with greater profits, since they have more units to sell or rent.

To facilitate that, the city is in the process of “upzoning” the core of most neighborhoods around the city – allowing taller buildings to be built than are currently permitted. Once complete, developers building in the upzones will have to make 5-8 percent of units affordable for those earning 60 percent of area median income (AMI) for rentals, and 80 percent of AMI for condos. The income restrictions would last for 50 years.

“Research has found that inclusionary zoning unit for unit is the best tool by far for creating economically integrated communities,” says Robert Hickey, a national housing policy expert. “Especially when it’s designed in a way that encourages development to be mixed income.”

Mixed-income neighborhoods, when created through inclusionary zoning, have been shown to bolster socioeconomic mobility for low-income residents. Those created by the inverse—wealthier residents moving into lower-income neighborhoods—do not have the same effect because, “because poor neighborhoods don’t have protections from displacement,” explains Hickey.

That is important in a city as racially and economically segregated as Seattle. As the map below of 2010 Census racial demographics clearly illustrates, there are clear divides between the city’s white population and populations of color.

Seattle’s concentrated pockets of poverty are “a clear outcome of housing policies of the 20th century,” says Gardheere, referring to the practice of “redlining” African-Americans and other people of color out of many neighborhoods in the city. “So then the schools, the health care facilities these low-income communities have access to aren’t up to par.”

A 2015 Harvard study quantified the impact moving to a higher-income neighborhood can have for children. Authors Raj Chetty and Nathaniel Hendren said their research, “shows that every extra year a child spends in a better environment — as measured by the outcomes of children already living in that area — improves her outcomes … We find equal and opposite exposure effects for children whose families moved to worse areas.”

Heather Schwartz, a policy researcher at RAND Corporation, conducted a study of Montgomery County, Maryland’s inclusionary housing program and found that “highly disadvantaged children with access to the district’s lowest–poverty neighborhoods and schools begin to catch up to their non-poor, high-per forming peers throughout elementary school, while similarly disadvantaged children without such access do not.”

Will being flexible be effective?

But there’s some question of how effective Seattle’s MHA policy will really be. The Mayor’s office predicts the policy will produce 1,500 onsite housing units in the next 10 years, and 2,200 units through the in-lieu fees developers will pay instead of building affordable units themselves, which is estimated to total to about $176 million. The exact fees developers would pay are yet to be determined.

Inclusionary housing policies elsewhere in the U.S are often shaped to incentivize on-site performance instead of developers paying fees, which are unlikely to create mixed-income neighborhoods.

“If development opportunities are scarce and land is getting really expensive, it becomes harder for fees to be invested in properties in a dispersed way throughout the city,” explains Hickey.

In Cambridge, MA, for example, developers must go so far as to petition the city and prove financial hardship to pay in-lieu. As of March 2014, the program has created 527 affordable homes and no developer had chosen to pay in lieu. New York City’s newly adopted mandatory inclusionary program only allows in-lieu payments for buildings with 25 or fewer units.

San Francisco’s mandatory inclusionary policy requires developers to rent restrict 12 percent of units, or make a payment that’s the equivalent to 20 percent of units into the housing fund. From 2002 to March 2014 it created 1,560 units.

Several of Seattle’s eastern neighbors have mandatory policies as well. According to Arthur Sullivan, program manager at ARCH — a housing coalition funded by east King County cities — Redmond has built 250 affordable units downtown through the program, with more in the pipeline, since it adopted the program in 1994.

Kirkland requires developers to set aside 10 percent of rental units for those making 50 percent AMI. Developers must petition the city for permission to pay in-lieu. The program has only built an anemic 4.4 units onsite and 1.1 through fees. Kirkland Planning Supervisor Dawn Nelson explains the small numbers by noting the program doesn’t apply citywide, and when they switched from voluntary to mandatory in 2010, much of the downtown core had already been developed to its full height. As construction booms again, however, Nelson says the city estimates another 150 units are coming down the pipeline.

Gardheere says, “if we’re not careful we’re just going to further economic segregation” with in-lieu fees. Nonetheless, she thinks that the flexibility of Seattle’s proposed MHA plan is not necessarily a bad thing. If affordable housing providers can build units in lower-income neighborhoods, it can help protect community cohesion.

“For some people it’s really important for them to be around their culture and community for them to be successful,” she explains. “Some people from low income communities wonder, for example, if there was an on-site (affordable unit in a wealthier neighborhood) would they want to move there?”

At a recent community forum on upzones in the University District, Office of Housing’s Emily Alvarado pointed out that housing fund dollars are leveraged three-to-one with public and private money, which stretch them further and allow nonprofit developers to build family-friendly two- and three-bedroom units, which the market tends not to build.

Ultimately, Gardheere says MHA is only a piece of the puzzle. Solving Seattle’s housing affordability crisis will require solving some of the underlying inequities that perpetuate the city’s racial and economic divides.

“This is just one tool. We have to combine all these other tools … Eventually the outcome should be that every zip code, every community is a zip code of opportunity.”

The City Council Planning, Land Use, and Zoning Committee will discuss the proposed MHA policy on June 7. The full council is slated to vote on the issue in late July.

This story was originally posted May 20.