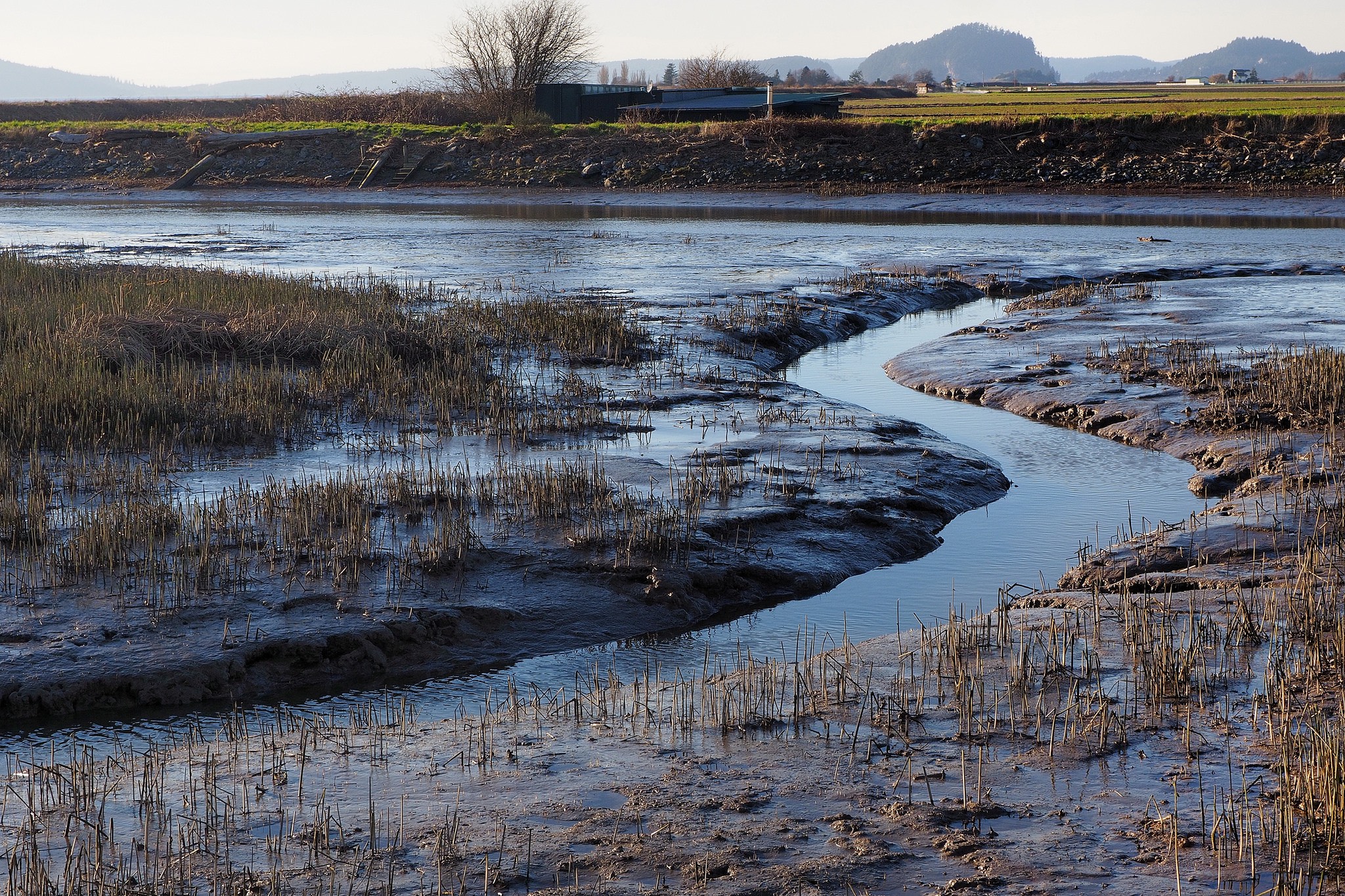 Mudflats along the Skagit River: A report questions how well water quality is being protected from agricultural runoff

In a stinging look at the agricultural practices in Washington, a new report places responsibility for degraded water quality and steep declines in Puget Sound salmon squarely on weak environmental enforcement by state government.

The report from the Western Environmental Law Center calls for dramatically escalated regulation of livestock waste, with a particular call for leadership and enforcement by the state Department of Ecology. This has long been a hot political issue that the Legislature under both parties has long shied away from, for fear of offending farmers and powerful agricultural interests.

The focus of the report is on the practices that could lead to contaminated water runoff, which can pollute groundwater supplies that people depend on for drinking water. This can include cows grazing too closely to streams, a lack of buffers between agriculture lands and waterways, or chemical fertilizers washing from croplands into waterways.

Environmental attorney Andrea Rodgers and the other authors of the report write, “A simple yet effective regulatory compliance enforcement program led by Ecology is desperately needed to achieve the long-established water quality standards intended to protect Puget Sound salmon.” It speaks dismissively of what the report portrays as the state Agriculture and Ecology departments’ heavy reliance on voluntary programs to protect water quality, salmon and natural habitat in rural areas, referring to them as “random acts of conservation.”

The Washington State Dairy Federation, a trade association, says that while there are voluntary programs, the state's Dairy Nutrient Management Act, enacted by the Legislature in 1998, “is highly regulated.” Dan Wood, executive director, says that to dismiss the industry's conservation efforts as voluntary “is either a misunderstanding or misrepresentation.”

Environmentalists complain about the degree of voluntary efforts and the lack of ability to monitor how well farm operations live up to best management practices.

The Western Environmental Law Center, which worked in collaboration with scientists and water keeper non-profits, paid special attention to the pollution’s effects on the rights of treaty tribes of Western Washington, in particular the Swinomish in Skagit County and the Lummi in Whatcom County. Both tribes, says Rodgers, have suffered damages by dairies “in their usual and accustomed fishing grounds” — where treaties guarantee them the right to fish. Skagit and Whatcom have substantial dairy and other farming operations, and runoff from agricultural operations has been identified as a substantial factor in water contamination nationally.

One of Ecology’s major initiatives to deal with agricultural pollution has been its effort to draft new rules on permits for some of the largest contributors to agricultural waste, so-called CAFOs or concentrated animal feeding operations. Ecology's last CAFO permit expired in 2011.

Of Washington state's 477 dairies, only about a dozen are covered by a state discharge permit under the Clean Water Act. There are hundreds of dairies with anywhere from a few head of cattle to more than 1,000, according to the report. “We have consistently advocated for coverage of all medium and large CAFOs in the state,” the report says, “but ultimately Ecology will decide on who will be required to seek coverage.” The report defines medium CAFOs as 200 to 700 head of cattle; and large as any over 700.

In December of last year, Ecology proposed a new draft CAFO permit, which would have allowed the agency to regulate more facilities where officials have determined there's a direct discharge to surface water. “The permit was notable,” says Bruce Wishart, an environmental legislative lobbyist for Puget Soundkeeper, “because it would have covered most dairies in the state and likely been a step forward to monitor discharges from groundwater which eventually seep into nearby streams, rivers and other surface waters.”

The Washington State Dairy Federation and other agricultural groups responded to the proposed permit by supporting for a Senate bill that would have reshaped the permit adoption effort. The Ecology and Agriculture departments would have been required to report in 2018 on their progress toward establishing a new permit and jointly administering it. Federal pollution discharge permits, such as for CAFOs, allow third-party lawsuits such as those when tribes have lost the ability to harvest shellfish or when community members are left with contaminated drinking water. But the dairy federation, says Wishart, favored adoption of a state discharge permit that, in contrast to a federal one, couldn’t be enforced by third party lawsuits. He says agricultural groups are confident that political pressure or staff shortages will head off enforcement by state agencies but they fear citizens or tribes might bring lawsuits.

The dairy federation's Wood says a lot of dairies would like a federal permit, “but it has to be based on sound science and affordable to implement.” Ecology's preliminary draft put a heavy emphasis on farms needing a permit if they didn't have double-lined lagoons and requiring soil sampling as deep as 3 feet; the federation believes 2 feet is sufficient. “We've invited Ecology to come out and look at lagoons and applications,” he says.

While the legislative effort to stop Ecology’s draft permit failed by narrow margins, Wishart says Ecology is still being urged by some to write a less-enforceable state discharge permit.

Ginny Prest, manager of the state Department of Agriculture's Dairy Nutrient Program, defends agency practices, saying they routinely monitor for water quality. Beyond the roughly dozen, mostly Eastern Washington-based CAFOs (Ecology and Agriculture differ on whether the state has recognized 10 or 12), the operations of hundreds of dairies have been checked statewide, often with follow-up visits to check on specific issues or to be sure lagoons and manure spreading are being handled properly. She says the program has completed 221 investigations to determine water quality violations over just the last two years.

In a chapter in the Law Center’s report, Swinomish Environmental Policy Director Larry Wasserman says virtually every stream traversing agricultural lands in the Skagit Valley has long been listed as having water quality problems, such as fecal coliform or inadequate oxygen. “To our knowledge not a singe one has attained water quality standards, despite millions of dollars spent on voluntary programs.”

Ecology relies heavily on voluntary incentive programs, many funded through the federal Farm Bill, to pay farmers to implement best management practices such as conservation buffers, crop tillage and nutrient management. Ecology's water quality program manager, Kelly Susewind, says the programs “are not really directed at industrial farms, dairy in particular.” At the same time, he says, the department “can work extremely well with those who want to do the right thing, and we find that most people do.” He also admits that “you're not going to voluntary incentivize someone who's adamantly opposed to doing something. Those folks need enforcement.”

Confidentiality clauses in the federal programs, however, keep them from being examined by the public. The Western Environmental Law Center’s report recommends more transparency, while charging there is an almost-deliberate lack of regulatory attention to the problems around poorly managed agricultural waste. As a result, says Rodgers, no one besides the farmer may know how well some of the operators' plans are being implemented.

“By not requiring polluters to comply with water quality laws through the enactment and enforcement of a regulatory approach to agricultural sources of pollution, we are fooling ourselves into believing we are on a path towards recovering Puget Sound,” the report says. “The future generations of this state cannot afford such self-deception."

You might also be interested in: "Fecal matter pollution in public water: The case of Snydar farm," by Crosscut's Drew Atkins.