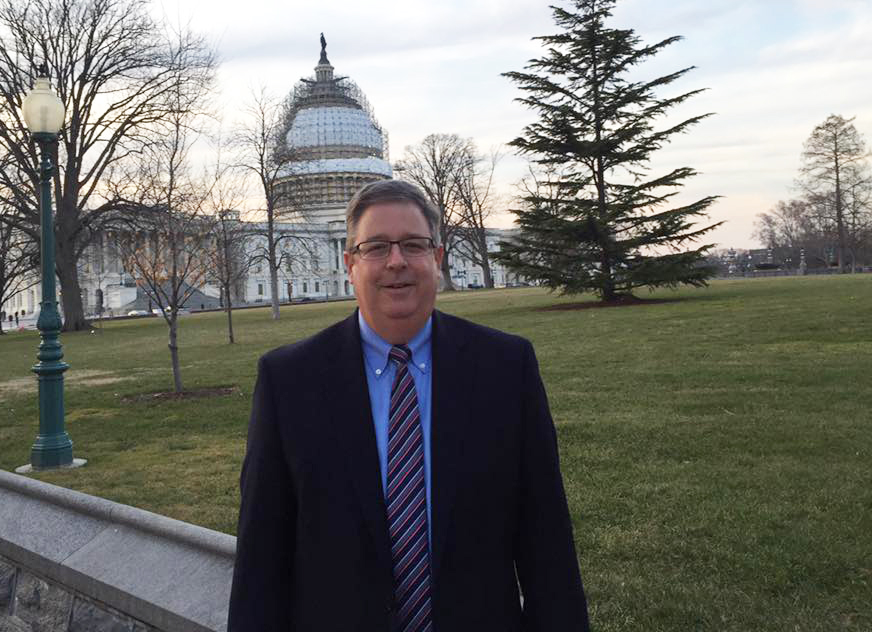 Acknowledging he had tried to avoid comment on the party’s nomination race up until now, Vance told reporters, “But now voters rightfully want to know who candidates support.”

The personal answer for Vance, who is challenging Democratic Sen. Patty Murray, is no one, at least for now. “In November,” he said, “I will either vote for a third party candidate, if a responsible conservative alternative emerges, or simply not vote for president.” He said he is voting for John Kasich, the former Ohio governor, in the primary.

Barring a miracle, Trump will win the Republican nomination, creating urgent questions for the party’s other candidates in blue or purple states like Washington, where voters are disgusted by Trump’s xenophobia, his plan to bar Muslims and his support for nuclear proliferation in Japan and South Korea.

Some of the questions are political: Will the party’s more moderate candidates be swept away in an anti-Trump turnout? Democrats are certainly hoping so.

State Democrats were quick to jump on Vance, trying to undercut his attempt to escape the drag-down effect of a Trump candidacy. Jamal Raad, state Democratic Party communications director, pointed to a Vance posting on Facebook after Trump made anti-Muslim statements in early December. The post mentioned the eventual need to “unite behind our nominee for President, whoever that is.”

Raad said, “Vance is a loyal Republican party insider who, if elected, will fight for the Trump-McConnell agenda that will deeply harm America's middle-class families.”

Other questions for Republicans, at least in Vance’s view, are moral and policy matters. In an opening statement to reporters, he said, “I take no joy in not supporting the Republican presumptive nominee, but I must place conscience and principle ahead of party.”

Asked whether he was rejecting Trump over his biased and sexist statements, Vance said, “Well, all of it matters. I have taken note of all of it, and I have reacted to some of it. And you can add to that the violence at his rallies, and him almost encouraging his supporters to go to violence.”

On policy issues, Vance called Trump’s protectionist trade policies “wrongheaded and unrealistic.” He was equally lacerating about foreign policy. “Talking about withdrawing or lessening our support for NATO and America’s Asian allies is insane,” he said. “I mean, actually encouraging the Japanese to develop nuclear weapons or encouraging South Korea to develop nuclear weapons would create incredible instability in Asia. I mean, how would China react to that?”

Vance’s quest to unseat the long-serving Murray and represent the entire state in Congress puts him in a unique position, where national political questions are especially relevant. While saying that former Republican state Attorney General Rob McKenna and former U.S. Sen. Slade Gorton agreed with his position, Vance seemed to try to shield other Republican candidates from pressure to take a similar stance.

“This is an unprecedented and difficult situation,” he said. “Everybody – there is no playbook for this, there is no road map for this — everybody has to make their own decision. I don’t want to tell anybody else what to do.”

He declined to say whether he had talked to Bill Bryant, the Republican candidate for governor. Bryant has not responded to phone messages or emails from Crosscut requesting comment.

Vance said the party hadn’t faced a situaion like this since 1912, when the party literally split nationally and Democrat Woodrow Wilson was elected president.

As bad as things may be for Republicans, Vance said the apparent nomination of Hillary Clinton means the parties are both offering unpopular candidates with high negative ratings. That could shield state Republican candidates from the damage of a Trump candidacy, he suggested.

“If the Democrats had a very strong candidate at the top of the ticket,” he said, “we would be in real trouble. Thank God for Hillary Clinton.” In discussing Murray’s policy stances, he called her Clinton’s “Siamese twin.”

Vance expressed hope that, having talked about Trump, he can focus on the issues in his race against Murray. “Now more than ever, we need new leadership in the United States Senate,” he said. “Going forward, that, and not the presidential race, is what my campaign will continue to focus on.”

The need to disassociate himself from Trump left a question about how in the world the campaign came to such an incredible pass. Vance himself, asked about the December statement where he had spoken of unity around the Republican nominee, spoke wryly of the need to be careful about posting Facebook statements.

Vance said, “People are hurting out there. I talk about this all the time in the campaign. Bernie Sanders is right. And others are right. The gap between the rich and poor is growing.”

He added, “The middle class is shrinking and people are looking for something and someone to blame.”