Saving the language that brought us 'Seattle' For several hours each day, Amber Hayward slips out of English, her first language, and into Lushootseed, the Native American language that gave Seattle, Tacoma, Issaquah and Skagit their names. As she showers, straightens her hair and puts on makeup, she describes each action in the language. She chats about her day in Lushootseed with co-workers at the Puyallup Tribal Language Program, and in the evening she speaks in it to her children, ages two and nine.

Lushootseed, once spoken by an estimated 12 thousand people from tribal nations all across the Puget Sound, has given the Northwest a legacy of place names. Today, only a few people speak it, and none of them fluently.

Hayward is an enrolled member of the Puyallup Tribe, and has worked for the tribe as a language instructor since 2011. Like many in her generation, she was never exposed to Lushootseed as a child, and opted to learn it as an adult. For some this might seem daunting: Lushootseed is rich in vibrant, explosive sounds written with special symbols, as well as complex grammatical concepts far from anything in English.

But for Hayward, learning, using and teaching Lushootseed is more than a job. “It’s life work,” she says.

Members of historically Lushootseed-speaking tribes from all over the Puget Sound will have the chance to learn the language in an immersion environment this August. The University of Washington, Tacoma and the Puyallup Language Program have put together a two-week course intended to train a crop of new teachers to bring the language back to their communities. It’s the first time an immersion course of this kind will be taught in historical Lushootseed territory.

“Lushootseed is a modern language — the problem is that historically it’s been taught as an academic language and one that’s sort of dead and of the past,” says Danica Miller, who will facilitate the course.

Lushootseed is far from the only indigenous language in the Northwest at risk of fading away. The Northwest Pacific Plateau, including Washington, Oregon and parts of British Columbia, is considered one of the top five hotspots in the world for language loss due to its density of indigenous languages, and the fact that, more often than not, the people speaking these languages are grey-haired. 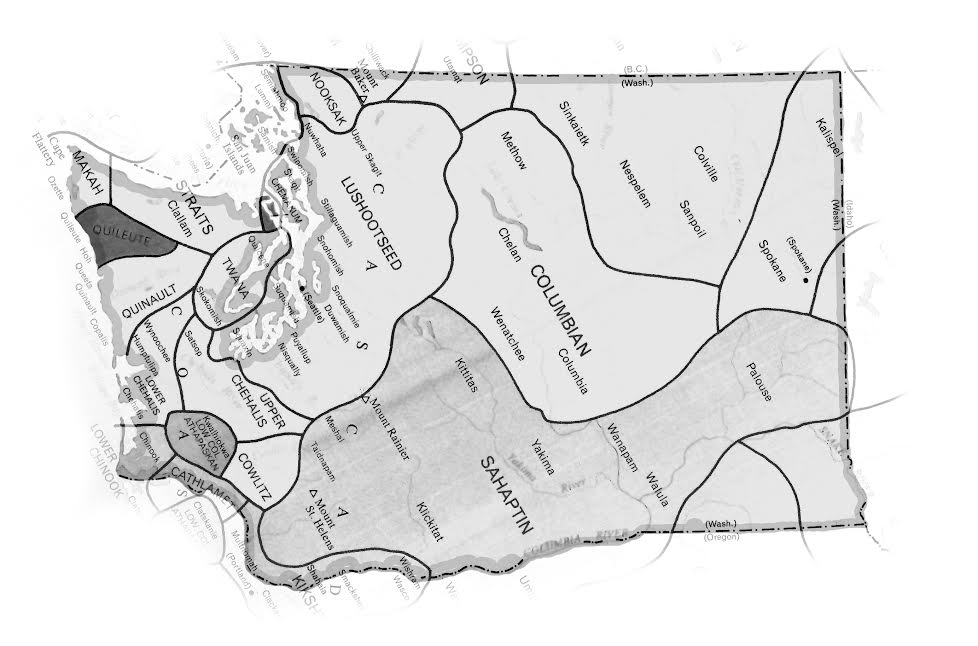 According to Russell Hugo, a specialist in indigenous language revitalization who holds a Ph.D. in linguistics from the University of Washington, the Northwest preserved a large number of Native American languages well, because the region was colonized by Europeans later than other regions of the United States.

That is until the 1880s through the 1920s, when thousands of Native American youths in Washington were sent to boarding schools. They were punished for speaking these languages in these schools, and Lushootseed and other languages declined in speakers under this policy of forced assimilation. Economic pressures since this time — which favored English as a language of employment — had gradually whittled away speakers of most languages in the region, Hugo says.

At Chief Leschi school, operated by the Puyallup Tribe, Hayward teaches Lushootseed to preschool and elementary school children. Situated in the Puyallup Valley south of Tacoma — Mt. Rainier looming large on the horizon — Chief Leschi has a student body that’s 98 percent Native American, hailing from some 60 tribes, according to Hayward.

Inside, staff trade friendly greetings in Lushootseed. Most signs, down to a placard indicating the drinking fountain, are written in both Lushootseed and English.

As she visits classes, Hayward is joined by the person who may know more Lushootseed than anyone else alive. Zalmai Zahir, of Nakota Sioux and Afghan ancestry — also known by his Lushootseed name ʔəswəli (pronounced UH-swuh-lee) — works as a freelance language consultant for the Puyallup Tribe and others. He grew up in Seattle and around the Northwest, and learned the language from elders, including Hayward’s great uncle. Zahir has been working to revitalize Lushootseed for over three decades.

Zahir is just one of many Lushootseed speakers and teachers who studied the language under Vi Hilbert, one of Lushootseed’s last fluent speakers, who died in 2008. Hilbert spent decades cataloging and teaching the language. She transcribed recordings, translated books, recorded stories and cultural knowledge, and taught the language to others. The late University of Washington linguist Thom Hess credits Hilbert with saving much of the language, saying that “thanks to her Herculean efforts, much more history, grammar, lexicon and myth has been saved from oblivion than posterity had any right to expect.”

And yet, the Lushootseed Zahir learned from Hilbert was about an eighth of its former self, according to his former teacher. When Zahir reads old Lushootseed texts, probably the world’s foremost expert in the language understands only about 75 percent of what’s written.

Zahir is so dedicated to using the language in everyday life that he once took on the challenge of abstaining from speaking or thinking in English for two weeks. Zahir’s vision for Lushootseed revitalization, which also guides the Puyallup Language Program, is gradual. Classroom learning is just the surface. Ideally, adults and children in the community would increasingly speak and use the language in their homes and everyday lives, and it would feel less and less like an obligation.

Some formerly endangered languages have seen encouraging successes with a method that is currently impossible for Lushootseed to implement.

Since the 1980s, for example, speakers of the Hawaiian language jumped drastically in number thanks to its immersion preschools, or “language nests.” This method of revitalization was originally developed by the Maori in New Zealand.

One of the founders of Hawaii’s language revitalization movement, Larry Kimura, once welcomed Hilbert as a guest to Hawaii. The Hawaiian language is a success story in revitalization, Kimura acknowledges. When asked why, he answers without hesitation.

“The children,” he says. “If your children don’t speak it, it will not live... I mean speak it fluently, naturally, like children do, in whatever activity they engage in.”

But what worked in Hawaii can’t necessarily be completely duplicated elsewhere. For example in Hawaii, children were exposed to the language without strong influences from English.

“You’d better speak it seriously,” he says. “You can’t be saying ‘Ring around the roses’ and then after that you go back into English.”

Tony Johnson, chairman of the Chinook Nation in Oregon, was one of the first to take this method to the North American mainland, revitalizing a language called Chinuk Wawa.Like Lushootseed, Chinuk Wawa, or Chinook jargon, has left linguistic traces in the Northwest; place names like Alki, Lummi, Tukwila, and words like potlatch and skookum.

Johnson, who learned the language from elders as a young man, was hired by the Confederated Tribes of the Grand Ronde in the 1990s to revitalize the language.

Inspired by the successes of Maori and Hawaiian, and with some advice from Zahir, Johnson set up immersion preschools for children.

They were a success; children in the schools became fluent at a level appropriate for their ages. “[We] found that, kind of amazingly, the kids coming in the door almost didn’t even notice the difference as long as they have a lot of attention and love,” he says.

Johnson says he would like to see language immersion schools insulated from tribal politics, and prioritized so that they receive sufficient funding.

“There’s always competition for dollars, and these programs are very time and money intensive if you want to do it right,” he says. “But once you commit to it and you actually see the results, it’s just as plain as day that that’s the way to do it. Bottom line is, we have to create immersion environments.”

In British Columbia, where 60 percent of Canada’s indigenous languages are spoken,  there’s been a decline in fluent speakers of indigenous languages between 2010 and 2014. This is largely due to elders passing away, says Aliana Parker, a language revitalization specialist with the First Peoples' Cultural Council (FPCC). But encouragingly, there’s also been a rise in semi-fluent speakers.

“We’re seeing a growing population of people who are really investing in learning their languages and developing their proficiency,” she said. “That was very exciting to see.”

The FPCC helps indigenous groups revitalize their languages using a variety of methods. Immersion schools are not possible for every community due to the high costs of these programs, Parker says. A lack of funding and government support are the biggest challenges for revitalization, according to Parker.

Indeed, according to Hugo, strong political support, incentives to use the language, and generous funding were key to revitalizing Hawaiian, Maori and Hebrew, three of the greatest success stories for revitalization.  Lushootseed doesn’t yet have enough teachers or funding for immersion schools, Hayward said. And of course, it has no fluent speakers.

This last point doesn’t worry Zahir too much. According to him, Lushootseed has better odds than other endangered languages that do have native speakers, because it’s well-preserved in texts. Also importantly, Lushootseed is slowly gaining more speakers, who are using it for increasing minutes and hours each day. It’s crucial that this continues, Zahir says.

Instructor Miller has been working on learning Lushootseed for years, though she says her level of fluency is “barely existent.” But for her, speaking the language perfectly is not a requirement. “Because I have difficulties with the language, doesn’t mean I can’t still be part of the community and apply my skills to help my people,” she said.

When it comes to Lushootseed’s long-term future, Zahir says, nothing is certain. If the language survives, it may not quite be the same language that was spoken for centuries along the Puget Sound.

“Lushootseed, if it revitalizes as a major language in people’s lives, it’s going to be heavily influenced by English,” Zahir says. Lushootseed’s complex grammar is already being simplified in a few cases by its speakers, in ways that resemble English. This may be inevitable, Zahir says. And certain subtleties may vanish.

Why save Lushootseed? For Zahir and others, part of the answer is this worldview the language presents. Another is its deep connection to their culture.

“Maybe I don’t go out and weave baskets and stuff, but if I can speak my language, language is culture,” says Hayward. “So it just brings all that back — you start thinking with a different mindset through Lushootseed.”

If Lushootseed flickers back to life as a living language, perhaps many others will get a chance to see the world from the mindset of the Puget Sound’s first people.