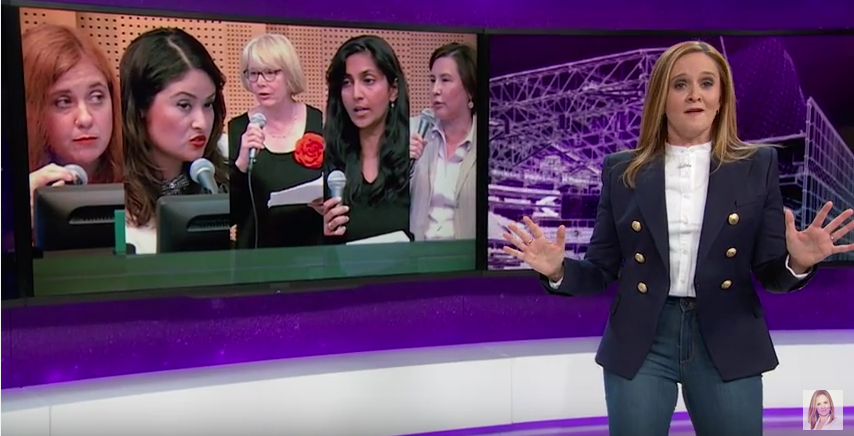 The women of the Seattle City Council star on Full Frontal with Samantha Bee.

Forget the SuperSonics, say hello to the new Seattle Seawards. Samantha Bee saluted the women of the Seattle City Council last night on her show Full Frontal, pronouncing them a new Seattle sports team. The bit was a response to the slew of misogyny heaped upon the elected officials after a contentious vote on vacating Occidental Avenue.

Bee went to bat for the city councilwomen asking, “So why did these crazy, sports-hating harpies stand between a town and the team it doesn’t have yet? Did they want to build a ballet arena or a ‘Sex and the City’-plex or something?”

Nope. Instead, she argued that the Seattle councilwomen had good reason for rejecting the proposal because it threatened industrial and maritime jobs.

"Ports before sports!" Bee exclaimed before cutting to a clip of Kingdome being demolished (the stadium we paid for 15 years after it was flattened). "Because those big, throbbing civic pride hard-ons that stadiums give a city are typically used by taxpayers to screw themselves."

And the team name, Seawards? "What, it means toward the sea, Seattle is a port city, oh my God what is wrong with you people? Go Seawards!" Bee said.