Sorry Sonics fans, the council made the right call 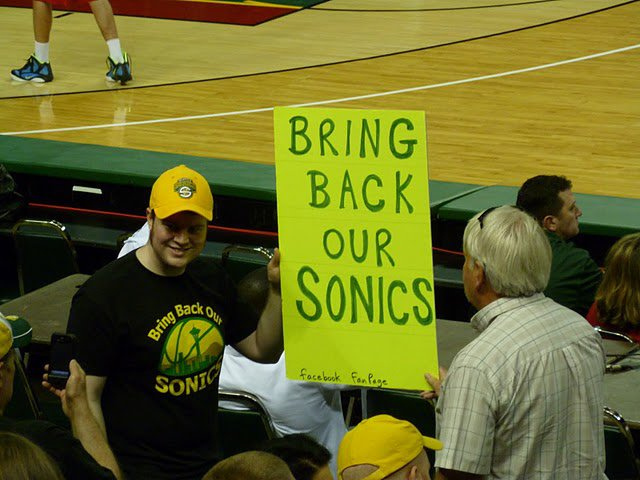 When the Seattle City Council rejected a proposal to sell off a section of Occidental Avenue to make way for a new sports arena, no one seemed more surprised than the people than the people who had urged the council to do exactly that.

Councilmember Sally Bagshaw went into the meeting expecting a 7-2 vote in favor of the proposal. The Port of Seattle, which has argued that vacating the street would snarl traffic in the city's industrial core, had already scheduled a meeting for the next morning to announce a lawsuit against the project.

A story in that morning’s Seattle Times offered evidence of the long odds, and just how much the mayor was all-in on the street vacation — and this is a mayor who knows how to get his way.

Thus jaws dropped when opponents and skeptics carried the day.

Murray’s embrace of the SoDo arena is interesting. He ran for mayor saying that SoDo would not have been his choice for an arena site. He seemed to be looking for an off-ramp on a project that was signed by the city council and put together by his predecessor (and opponent) Mike McGinn.

But Murray has since become convinced that SoDo is workable — mitigable at least — and has wanted to avoid any perception that the city is not holding up its end of the bargain to get the NBA and NHL here. No mayor wants to be tagged, as Greg Nickels was, as the mayor who “lost” the Sonics. The value of a pro sports franchise to a city was likely brought home when some half-a-million people packed downtown Seattle to watch the Seahawks bring home a Super Bowl trophy in 2014, shortly after Murray took office.

The passionate advocacy of Sonics fans may also be a factor.

The city council that considered the street vacation, however, is not the council that signed the memorandum of understanding on the project. There are many new members, and this is now a council largely elected by district, which encourages council members to drill down on what the needs are in their specific backyards. Filling potholes and achieving affordable rents might be trumping a big-picture basketball/hockey/entertainment arena/district as the place to concentrate the political mind.

The sports fan community has also been way too dismissive of potential problems with the arena location and the potential economic impacts on a trade-dependent city that has not lost its industrial base. A council majority was clearly swayed by some of those concerns, and by the breathless idea that everything had to be put in place now for teams that might never come. The council’s decision doesn’t close the door, but it is prudent.

Another concern might have been the ethical fraying of the project: Investor Chris Hansen’s team’s behavior in trying to steal a franchise in Sacramento and violating California regulations in the process; the suppression of a report that contradicted a fundamental assumption of the city’s environmental impact statement for the project, providing the basis for potential litigation outlined a couple of weeks ago by the Longshore union.

Such realities could pose challenges for any alternative to Hansen’s SoDo project too. Key Arena, once rejected and now back in play as a possible NBA/NHL facility, would require significant public investment to be made ready. It makes sense in many ways, but will the public consider it an important thing? Will a potential franchise owner find it workable? Will the NBA or NHL be inspired by it? Will courting any new pro sports franchise live up to ethical standards?

Murray followed the street vacation vote with a press release stating his commitment to see an arena built somewhere in the city—as opposed to a regional facility in, say, Tukwila or Bellevue. And he does not seem to have abandoned SoDo, but is pivoting to a more wide-open game that may be necessary to corralling support and minimizing opposition.

The return of the Sonics will almost certainly be much longer than many fans were hoping for. Getting it right will be worth the wait.