A death blow to coal ports in Washington? 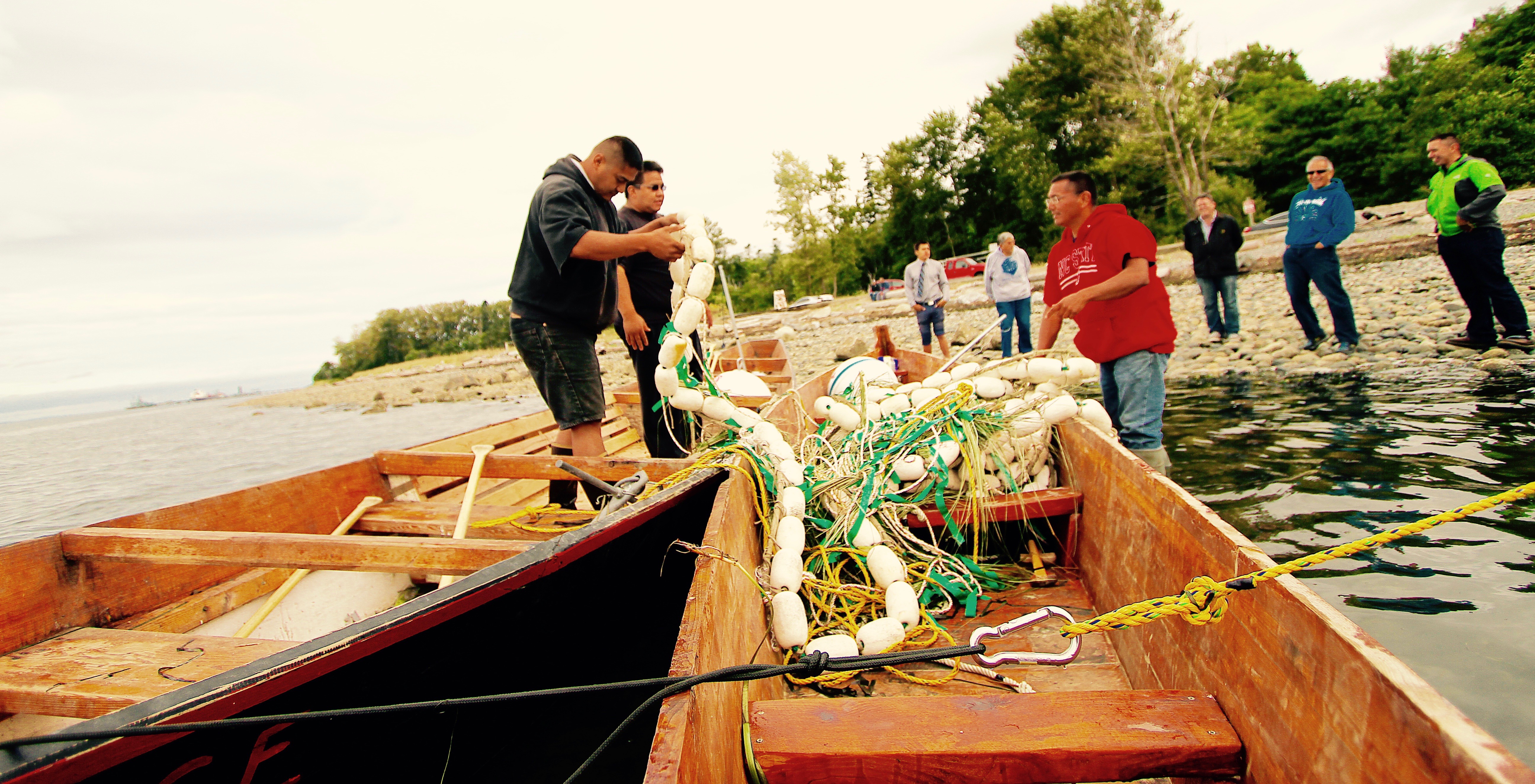 Lummi tribal members use gear for reef netting, a traditional method of fishing.

A firmly worded federal ruling Monday has seemingly quashed the hopes of developers of a giant coal-export terminal north of Bellingham. The findings, celebrated by opponents of the coal port, also marked another in a string of major victories for Native American tribal rights.

The U.S. Army Corps of Engineers ruled that the $665 million Gateway Pacific Terminal proposed at Cherry Point north of Bellingham would violate the treaty rights of the Lummi Nation by intruding on their “usual and accustomed fishing rights.”

The ruling, by Seattle District Commander Col. John Buck, could effectively kill the proposed terminal, after nearly six contentious years in which opponents packed public hearings to oppose the terminal as a potential polluter and contributor to climate change. Gateway Pacific, in turn, promised hundreds of jobs in construction and operation of the export terminal on the Strait of Georgia.

Lummi fishermen have worked the Salish Sea since long before settlement of the area by whites, and the tribe holds particular standing within the region. “The Lummi is a fishing tribe with the largest fishing fleet of all the Northwest tribes, and in the 1980s, the peak of the Lummi fishing industry, approximately 2,000 Lummi members where employed in the fishing industry,” the Corps’ new document states.

Buck’s ruling was the latest in a string of decisions in the region based on rulings in the 1970s by federal Judge George Boldt, upholding tribal rights in treaties signed in the 1850s guaranteeing tribal members the right to fish and hunt in traditional areas.

The Corps decision, said Tim Ballew II, chairman of the Lummi Indian Business Council, was “not only big for fishing families but also for the ancient ones who will always rest protected.” The proposed terminal would be partially built on land the Lummis claim as an ancient cultural site.

“This is a good day for the Lummi, a good day for treaty rights and a great day for Indian Country,” Ballew told Crosscut. Several other tribal leaders in the Pacific Northwest joined Ballew in praising the Corps’ decision.

Gateway Pacific developer SSA Marine of Seattle denounced the ruling. “This is an inconceivable decision. Looking at the set of facts in the administrative summary it’s quite obvious this is a political decision and not fact based,” said Bob Watters, president of the proposed terminal. Developers are “considering all action alternatives,” he said, which could include an appeal to federal courts.

State Sen. Doug Ericksen, a prominent Republican whose district includes the proposed terminal, urged SSA to appeal to the courts.

Colonel Buck made it clear there would be no Corps reconsideration, unless GPT could convince Lummi leaders to change their position. And in a one-page statement that repeated his “no permit” language four times, he said, “The district’s evaluation of effects of the proposal on the Lummi’s U&A fishing rights is undertaken to fulfill the federal government’s responsibility to protect treaty rights. The Corps may not permit a project that abrogates treaty rights.”

Buck told reporters the major consideration in his ruling was the impact on the fishery of the three-berth, deep-water dock and trestle required to service some 487 giant bulk carriers a year, primarily to haul coal from the Powder River Basin in Wyoming and Montana to ports in Asia.

Buck said his staff reviewed thousands of pages of documents, many of them dealing with the significance of the Lummi fishery in and around the terminal area. Lummi documents contended tribal fishers had landed some 10.7 million salmon and 24.4 million crabs in the period 1975 to 2014. Gateway Pacific contended that only a small part of the fishery was impacted by the proposed dock and trestles.

The impact of the structures was sufficient, Buck said, to determine that there was more than a negligible — or, legally, de minimus — impact on Lummi treaty rights. He said the number and size of ships was part of the decision, but only in the area of the structures. It was not necessary to study the impact of vessel traffic on a larger area in the Salish Sea, he told reporters.

The Gateway Pacific project is the last undeveloped deep-water site at Cherry Point, which also includes two oil refineries and an aluminum plant.

The site, valued by Whatcom County at about $9 million, is 1,520 acres of largely open and brushy uplands and a tidal area that is a state aquatic reserve. The site’s long expanse of open shore had at one time been a potential housing location but for many years has been zoned industrial. It is served by the BNSF railroad. The impact of up to 18 daily loaded trains of coal if the terminal were built to capacity was a major factor in opposition from the Bellingham community that began to form in the Bellingham area about five years ago.

Opposition soon picked up mileage on the issue of climate change — 48 million tons of coal a year would be sent to power plants and industries in Asia, major factors in carbon emissions. Climate change widened the scope of opposition at five regional hearings, which drew thousands of witnesses. Lummi speakers were among the most effective at the forums. The tribe increased its opposition at a ceremony in 2012 at which leaders declared they would not be lured from their position by offers of money. The Lummi Nation’s formal appeals to the Corps of Engineers to enforce federal treaty rights soon followed.

Climate-change groups were among those praising the ruling. “From this decision to China’s groundbreaking cap-and-trade program and recent commitments from world leaders at the UN Climate Negotiations in Paris, the writing on the wall is clear: Coal exports are the wrong direction,” said Cesia Kearns, deputy director with the Sierra Club’s Beyond Coal campaign, in an email statement.

Becky Kelly, president of Washington Environmental Council, said, “All of us owe the Lummi Nation — and the many Tribal Nations that stood with them — a huge debt of gratitude.”

SSA Marine’s decision on whether to proceed with environmental reviews pending legal challenges is also likely to be influenced by a collapse of the coal industry in the Powder River Basin and elsewhere. Peabody Coal last month joined small coal companies in declaring bankruptcy; Peabody had contracted for about half of the GPT capacity. The other contractor, Cloud Peak, has also had serious financial challenges in recent months.

While opponents celebrated the ruling, it remains unclear how local and state agencies would deal with a mountain of scientific documents accumulated under environmental reviews over the past three years — costing Gateway Pacific nearly $12 million to commission. Whatcom County and the state Department of Ecology will become owners of the material; some of the studies are complete, others only partially. SSA Marine asked on April 1 for a 45-day timeout to the environmental review, which has already cost the company nearly $12 million. Tyler Schroeder, Whatcom County’s lead person on the reviews, said no decision could be made until SSA Marine decides if it will keep its application alive. The company must decide by May 15.

Colonel Buck made it clear on Monday, however, that the Corps of Engineers is done with Gateway Pacific and will not pursue any additional review — unless ruled by a court. That would appear to make the review being conducted by state and local agencies moot, pending a legal ruling. Any court review would take months and perhaps years, however, and SSA Marine has only a few days to decide if it will continue to pursue the necessary permits.

Gateway Pacific was the largest of several coal-export plans unveiled when the Asian coal market was at its peak about six years ago; others have failed or been suspended, leaving only the Millennium Bulk Terminal proposal at Longview. A draft environmental review has been completed and is undergoing public comment. There has  been no claims of tribal rights at Longview, on the Columbia River, similar to that of the Lummi Nation at Cherry Point.