Trump may be doing serious damage to Washington GOP 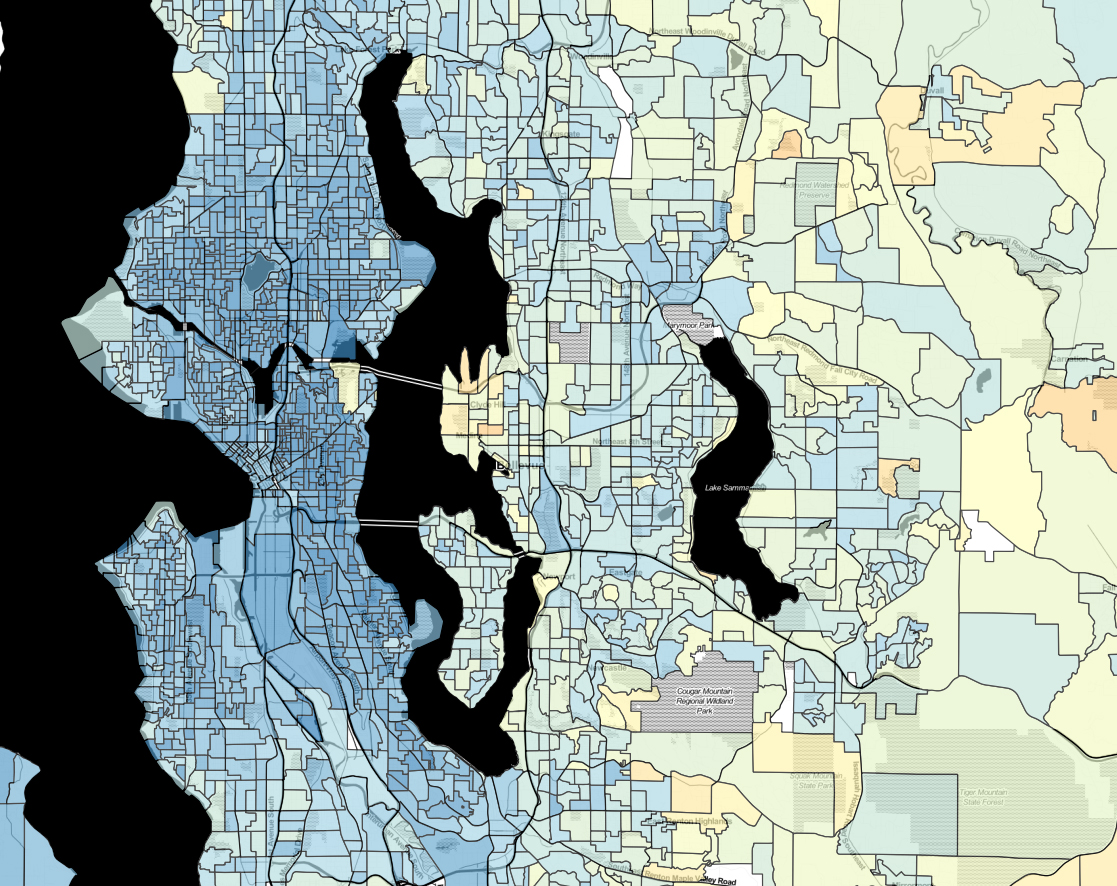 Was last Tuesday one of the worst moments for local Republicans in recent history? When it comes to their party’s long-term chances in Washington state, it may well have been.

Despite denouncements from numerous local Republicans, Donald Trump was dominant in last Tuesday’s presidential primary. He received over three-quarters of the statewide vote, even breaking 70 percent in establishment-friendly King County. Mere weeks into his reign as presumptive nominee, he did what many pundits said he never could: consolidated the Republican base, and relegated his opposition to ineffectual protest-voting.

To explain, let’s start with a map: the precinct-by-precinct breakdown of Seattle-area ballots on Election Night. The darker the blue, the higher proportion of ballots that voted Democratic; the darker the red, the more Republican ballots.

This map is a lot bluer than usual. On Election Night, 73.2 percent of King County ballots were Democratic. That figure has retreated slightly to 72.5 percent after additional ballot counts, but nonetheless, it’s unprecedented. That’s higher than Barack Obama received for both his first run (70.0 percent) and re-election (68.7 percent). It’s also way more than the proportion of Democratic ballots in the presidential primary before that record-setting first win (66.8%).

Trump may have overwhelmingly won the Republican side, but he did so with a record-low share of suburbanites picking the GOP option.

Election nerds may note that these areas voted Democratic once before – back in Obama’s 2008 landslide. But even then, they didn’t vote Dem in the February 2008 primary. Indeed, many of Washington’s suburbs have seen big drop-offs in Republican voting between 2008’s primary and last week. These drop-offs appear strongly associated with income, but even more so with education levels. 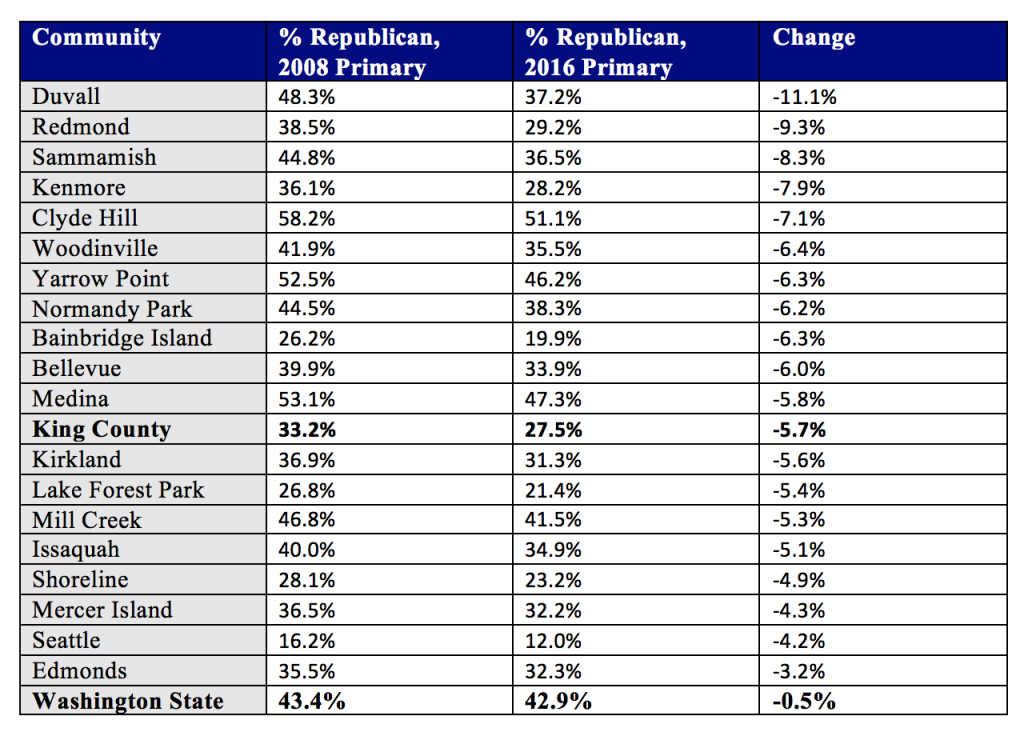 This wasn’t what local Republicans were hoping for. Going into the primary, it was expected that many moderate, GOP-leaning voters might cast a protest vote for John Kasich. While some did – Kasich did well in the above cities, breaking 20 percent in several of them, another bad sign for Trump – it appears some of them didn’t. Instead, they voted Democratic.

This pattern wasn’t unique to the Seattle area. Educated suburbs around Spokane, Tacoma, Vancouver and even the ruby-red Tri-Cities all saw the GOP take a hit. This is despite the fact that the Republican primary was used to allocate all delegates this year, and only half of them in 2008.

These results are especially impressive because these educated, wealthy suburbanites loved voting for Obama in 2008. The cities above delivered Obama some of his biggest margins versus Hillary Clinton. He was even more popular among suburban swing voters in the General Election, setting all-time records for Democratic performance on the Eastside. And yet, Trump’s 2016 toxicity with suburban voters may even outpace Obama’s 2008 strength.

It’s hard to find silver linings here for Republicans. This year’s primary was lower-turnout than 2008, but I found no signs that demotivated Republicans explain the GOP drop in the Seattle suburbs. If this were true, you would expect to see the biggest declines in turnout there; to the contrary, these were some of the few areas where turnout held up.

There are certainly many places in the country where Trump will expand the Republican base. But, unlike some states, Washington has more Redmonds and Mill Creeks than Aberdeens and Longviews. For local Republicans, battling in key suburban districts and on down ticket races, last week’s results shouldn’t be a comforting sign of party unity. In fact, they should be downright ominous.