A historian's take on the new 'Paint Your Wagon' 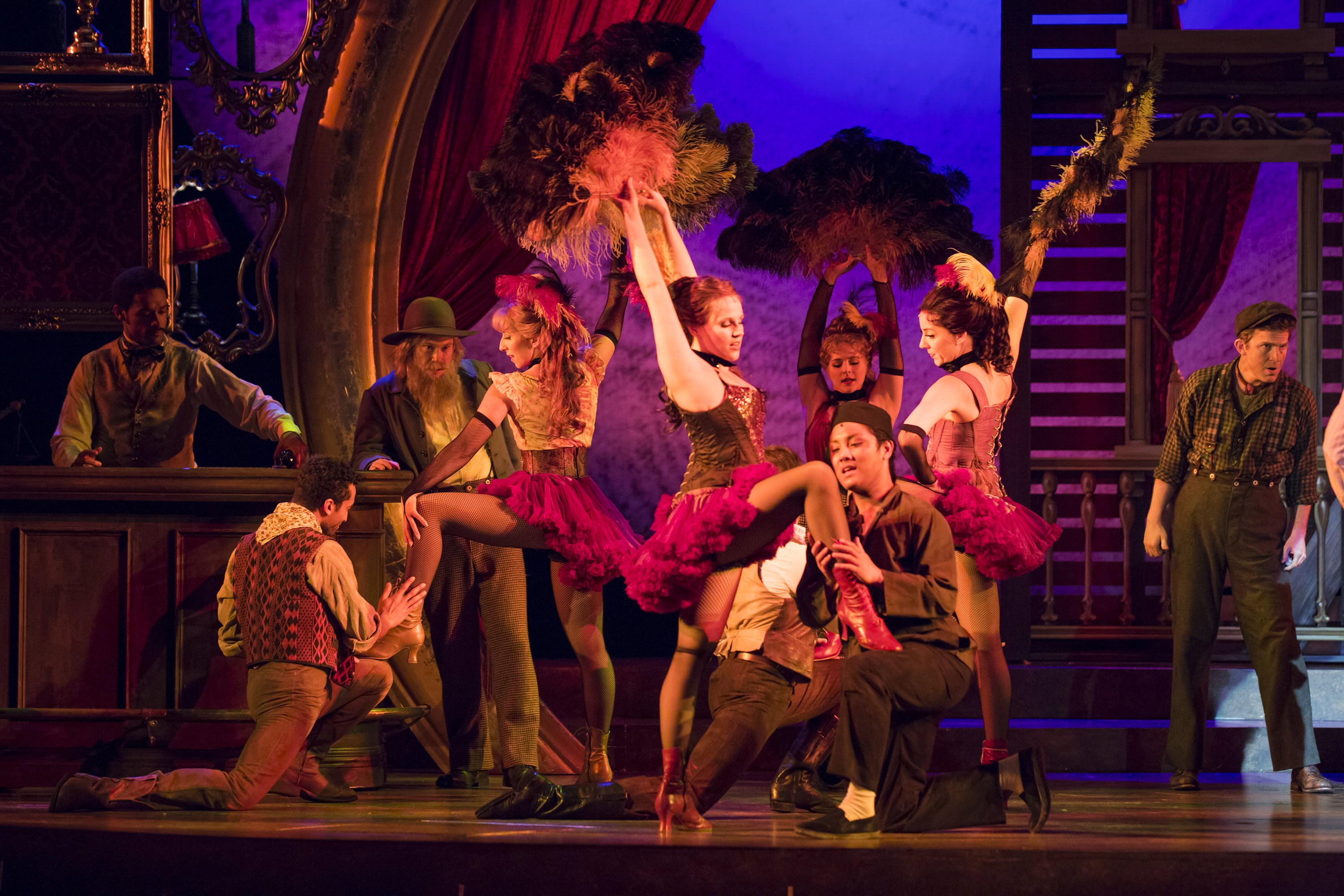 The company of Lerner & Loewe's Paint Your Wagon at The 5th Avenue Theatre.

In its revisionist production of the musical Paint Your Wagon, Seattle’s 5th Avenue Theater has put new western wine in an old and gnarled bottle. Set in the California Gold Rush, the original bottle was blown in 1951 by Alan Lerner and Frederick Loewe as a Broadway spectacle, though its basic shape was molded by older legends.

You can probably picture that dominant Gold Rush figure in your mind right now: the lone man in red flannel and Levi blue, panning for gold in mountain streams, communing, ruggedly, with nature, wresting metal and freedom out of earth. This is the American West as origin story of the nation.

But the white man bucking up to conquer the land is a story ill-equipped to speak to us today, when people of all identities are seeking to make America a safe and affirming space even as they are shot down in schools, streets and clubs. The Western as a heroic, guns-blazing display of manifest destiny is, or should be, dead.

Yet when 5th Avenue artistic director David Armstrong approached Jon Marans to write a new book for the musical, the playwright found that by digging into the real history, he could get past the way the West had been simplified and white-washed in the lore. “My version is much closer to the true story, about how the whole world converged on California...and how everybody started to mix in ways that they hadn’t mixed before, both good and bad,” Marans has said.

His revision uncovers the ways our region's storied past has been shaped by both convergence and conflict among peoples, sifting through a rich and surprisingly diverse past to deliver modern cultural currency. The real gold rush was a liminal space for people from all over the world, a landscape in which new identities and new worlds were forged and radically different futures were possible.

Marans puts us in the middle of that space, in a rough mining camp dubbed No Name City, populated with colorful cast of characters from the far corners of the earth. We have H. Ford, a free black man from New York City; Jake, a white man from South Carolina along with his slave (and half-brother) Wesley; two Chinese brothers; an Irishman; Armando, the charming Californio who’s lost a vast ranch to the invading Americans and is now reduced to delivering the mail; and a mysterious bearded mountain man from somewhere in the South.

These characters interact in a frontier tent of a bar, where Jake keeps trying to set up a segregated space. The characters willfully cross and confuse the lines of demarcation, however, choosing to congregate around the integrated table that is clearly the most convivial. As gold keeps rolling in, everyone seems to be mostly getting along.

Our mountain man gives up his preferred loner life of free-footed wandering to take up responsible positions in the community — helping rescue a Mormon wife from an abusive marriage, marrying her, and then also assuming the roles of both mayor and sheriff. He even shaves off his beard, revealing that he is Ben Rumson, formerly a state Senator back in Tennessee. With this cross between Davy Crockett and Teddy Roosevelt at the center of the action, the musical is working out America’s shortcomings and hypocrisies on race, gender and equality through its white male protagonist. By implication, all of the other characters, as hard as Marans has worked to imbue them with agency, are rendered marginal — part of the supporting cast.

Eventually Rumson’s refined daughter comes West, and quickly falls for the equally refined Armando. But the father rejects their interracial love. The Irishman loses everything to the house, but instead of going after capitalist Jake, he puts on a hood and tries to rob the Chinese brothers, killing one. Rumson at first places credence only in the testimony of white witnesses, who quickly turn the murder into an act of self-defense—all these revisions encapsulate America’s conquest of the West, and the prejudice faced by people of color throughout its history.

Wearing a glinting sheriff’s star, Rumson realizes he harbors within his heart the same prejudices that Jake proudly wears on his sleeves. Humbled and shamed, Rumson hits moral rock bottom as the musical reaches its crescendo with the tremendous song from the original, They Call the Wind Maria. Sung brilliantly as the stage flashes with lightning and shakes with thunder, the “wind” becomes the external and internal storm of prejudice that killed the Chinese man and threatens to sever Rumson — and by extension America — from any hope of love and community. But Maria is also a redemptive, avenging and cleansing force of nature.

Chastened, Rumson resolves to do his part to make his new home in the West a more welcoming place. He may still be father, but he will now listen to his wife and daughter, see African American townspeople as his equals, bless the union of an Asian man and white woman, and bear-hug his Latino son-in-law into this more open America.

Marans injects a note of caution by having Rumson ask his diverse townspeople: “You honestly think we’ll all get along better this time?” Ford replies for them all: “Hell no! But it’s a gamble worth taking.”

5th Avenue has taken its own gamble by projecting such a happy ending, with diversity and love triumphing over all. Some may feel that the new Paint Your Wagon ends up being too didactic and fanciful, brushing modern values on an historical backdrop that can’t take the pigment.

But is it really that outlandish?

Some Chinese did do well mining in the tailings white men like Jake sold to them, making good on what whites left behind as waste. Despite violence and indiscriminate killing of Chinese, a few formed unions with white women. Having Jake’s slave and half-brother Wesley find freedom is not entirely far-fetched either. One slave brought to California was rented out to work in a camp casino, sweeping up the place every night. He found enough coin and dust amidst the dust to amass a small fortune, using it to buy his own freedom from his master (who was also his father).

We certainly need to reckon with the Gold Rush’s toxic tailings: massive environmental destruction and class exploitation, criminal dispossession of Californios, genocidal killing of Native Americans, and the creation of a racist and sexist legal code that unleashed a terrific wave of violence and repression. The musical does not exactly brush all of this aside.

But the audience left with the glowing sight of the rebirthed Rumson City where another future—utopian yet also grounded in history—seems possible. That’s a nugget worth looking for today, especially when placed before us with such scenic, kinetic and lyrical gusto.

All photos by Tracy Martin. 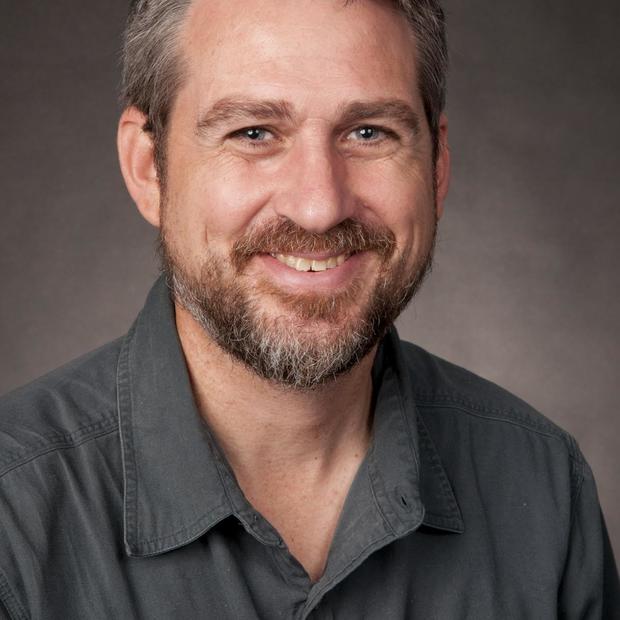 A professor of history at the University of Puget Sound, Douglas Sackman explores environmental, Native American, and Western and Pacific Northwestern history in his teaching and research. He is the author of "Wild Men: Ishi and Kroeber in the Wilderness of Modern America" and "Orange Empire: California and the Fruits of Eden," which won the Martin Ridge Award for the best book on post-1848 California history. He is currently working on a book entitled "American Panorama: Rediscovering the History of the North American West."