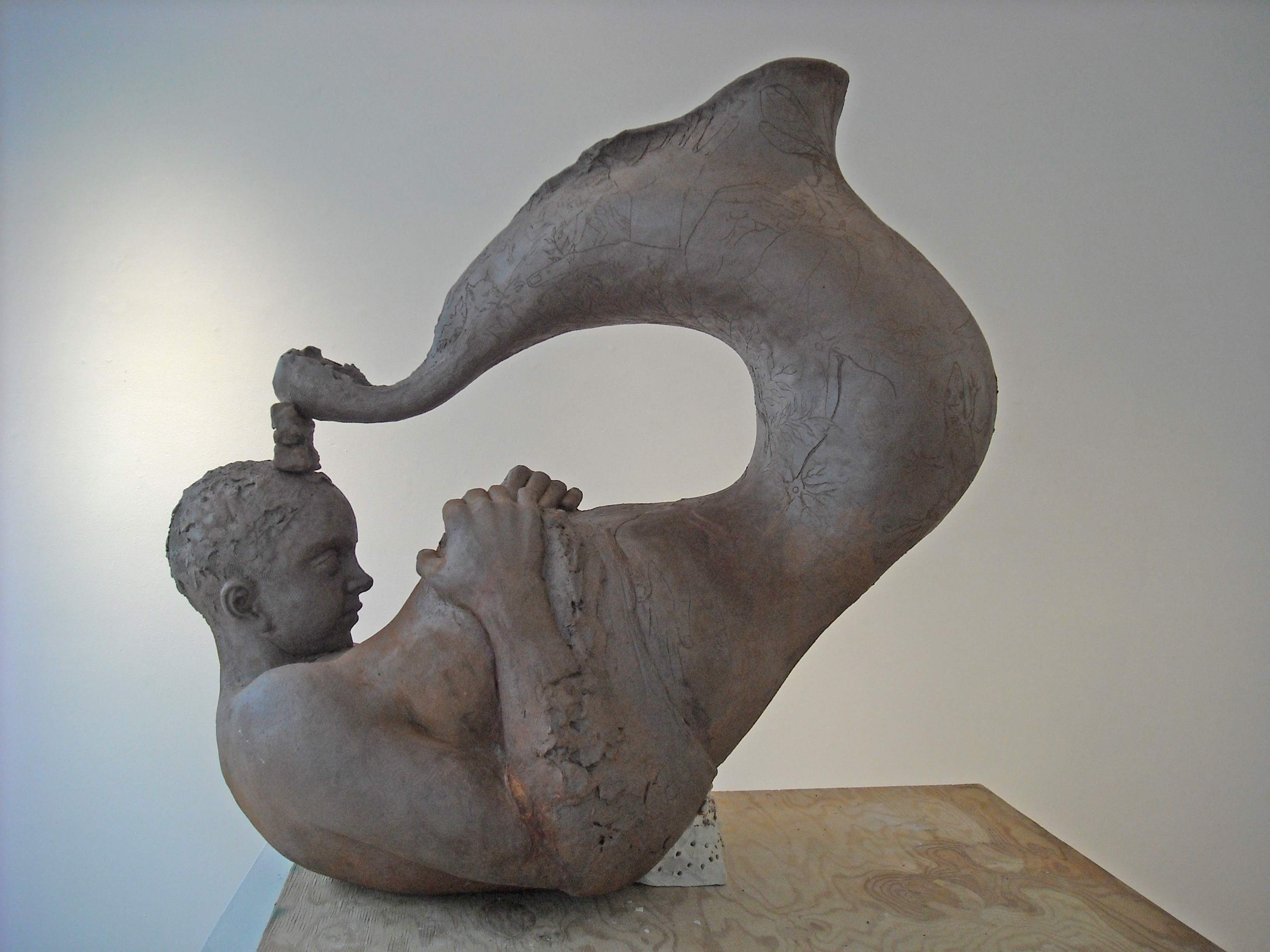 Seattle, a city of engineers going back a century to the founding of Boeing, seems in overdrive, growing big bright shiny buildings to house ever more tech services, engineers and tech workers. Perhaps less visibly, there have always been artists here as well, providing a very different outlook.

Artists function like mirrors, reflecting inward and outward the places and times where and when they live. These mirror-beings are actually pretty damn high-tech themselves, providing glimpses, as if through windows, of states of being, emotions and feelings, all simultaneously.

Artists remind us of our humanity, our connection to place, our potential and our vulnerabilities. And, as they explore our inner world, they often do it with a technical virtuosity that matches those of the engineers who focus on the outside world.

There’s an exhibition by Seattle ceramic artist Kathleen Skeels, at Gallery IMA in Pioneer Square through July 2 that displays many of the current contrasts in our city’s make-up. I believe the show is important and decidedly worth taking in, because it uses a very fragile medium to present the fragility of life itself.

This exhibit comes at a time when the multiplicity of cranes at work in the city puts robustness, growth, financial strength and other such corporate niceties right in our face. By contrast, the work on view at IMA is highly personal, full of demons and angels, insects, animals, naked human beings — female, male, androgynous. The work is beautifully rendered by a master craftsperson; it is haunting and full of open-ended questions. 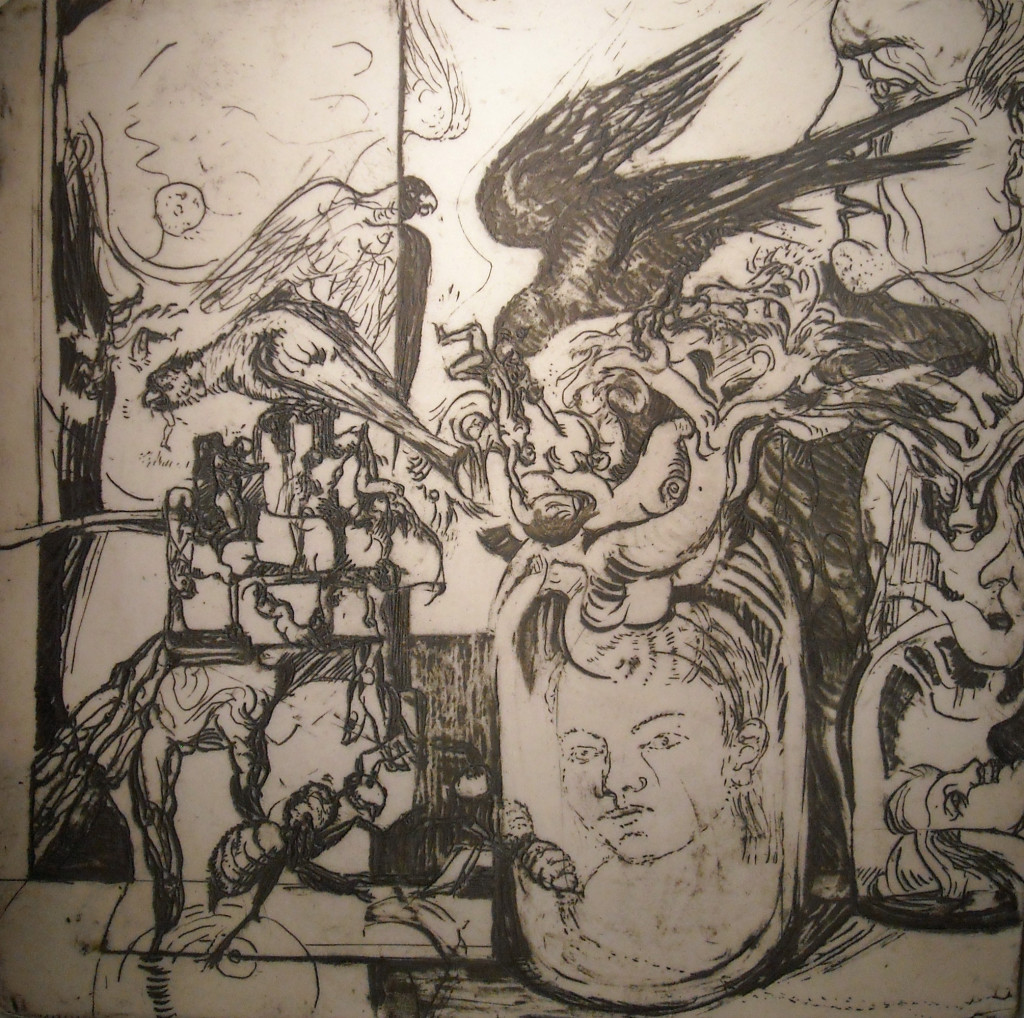 Skeels, who studied painting at the UW, draws with great facility, and the show is full of drawings on every surface. There is drawing inside and outside the clay pieces, and there is a particularly evocative set of prints on the walls, prints of drawings done originally in porcelain. Skeels told me that the original drawings are considerably smaller than the prints, which were produced using sophisticated digital photography. This high-low tech is characteristic of her work — the directness of craft in clay belies the technical virtuosity demanded in firing large complex pieces successfully, or even working in the very unforgiving porcelain.

The drawings take us from ecstasy to doubt and despair, or the other way around, often in the same piece. There are figures of sublime beauty and gruesome menace, even horror. The drawings tell a story, but it is not one that the viewer can fully make out, or perhaps would even want to. They clearly refer to inner states of being, and they go deep. What we cannot know is what it was like to experience those depths for the artist; the drawings seem to function as memento mori after the dives.

“The only way I can really know myself is through the artwork,” Skeels said to me recently standing in front of one of the drawings. But conversely, we, the viewers, cannot know her by seeing these works. What we can know is that her inner life is very rich, troubling, complex, and full of beauty. We are privileged to have such a vantage point, even if it is not fully explicable. 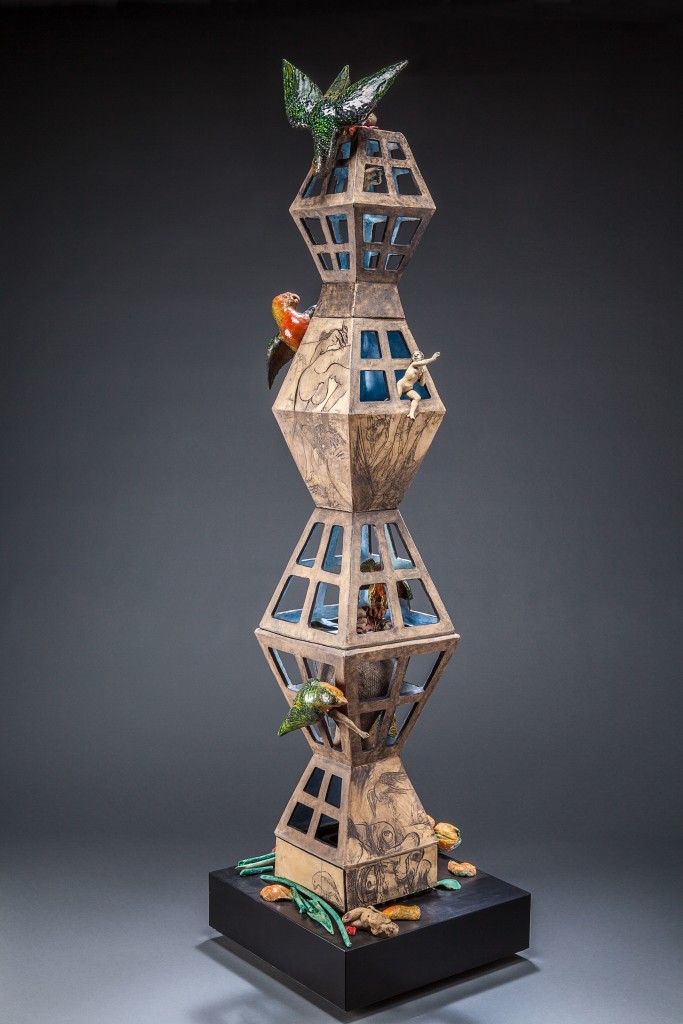 Elements from the drawings reappear in the sculptural works. There are sections of “Girl in Jar” visible in “Death Cage Tulipiere.” The sculpture, which stands 6 feet tall, could actually hold water and tulips, but is very obviously far more than a vase. It features large birds, a very small person, and a girl trapped inside. The birds circle the surface of the cage rather menacingly, while the little person pokes out. The outside stoneware is unglazed, but lurking inside, which we can view by peaking through the cage openings, is a wonderful sky blue, evoking the outdoors, giving the caged girl a soothing if perplexing place to be.

“La Sirena,” a large terra-cotta tour de force mythical creature, has a young woman’s head, large breasts and a serious tail that extends out, curls up and comes to rest on her head. Fired at a high temperature, the unglazed clay surface exudes a strength and force that counters the obvious precariousness of the creature sitting with her tail on the top of her head.

Skeels teaches at the remarkable Seward Park Clay Studio, a treasured public-use facility, where she herself learned to work with clay. She is a dedicated teacher, as those who have studied with her are quick to attest. She constantly carries out experiments with types and mixes of clay, firing temperatures, glazes, underglazes etc. The knowledge she’s amassed from her testing is passed on directly to the students. She also gives them full permission to use clay however they wish, supporting their efforts as they unfold.

But few of Skeels' students, of course, are able do with clay what she can — evoking as she does a full-borne dance of life and death. The work she exhibits at IMA is full of trepidation and fear, youth and age, delight and awe. In other words, the work is about living a life that is being examined, rendered with finesse in the most basic of materials.

The show, which functions much like a retrospective, is delightful for the breadth and variety of work on view, and the gallery is to be congratulated for bringing it to us. The work is however undated on the wall labels, an omission that makes it nearly impossible to understand the trajectory in which it unfolded over decades of production.

As an artist Skeels has worked through various media; early on she animated her own films. Her ceramic work, with corporality far different from an animated movie, has nonetheless a cinematic quality. But what we are seeing at IMA are outtakes from a non-linear dream-like “experimental” film. We’re given fleeting glimpses of bodies floating in and out of spaces that are here and then not. Her surfaces, all drawn into and upon, are baroque in their fullness of action. Her exhibition is a gift, the generosity of sharing a very private reality.

Skeels has lived her whole life in Seattle, but she has done so out of public view. She is the kind of artist that all places need and deserve, but which often they don’t appreciate or acknowledge. As the city becomes increasingly expensive and corporate, I fear that there will be fewer and fewer persons like her making art here. And that would be to our enormous collective loss.