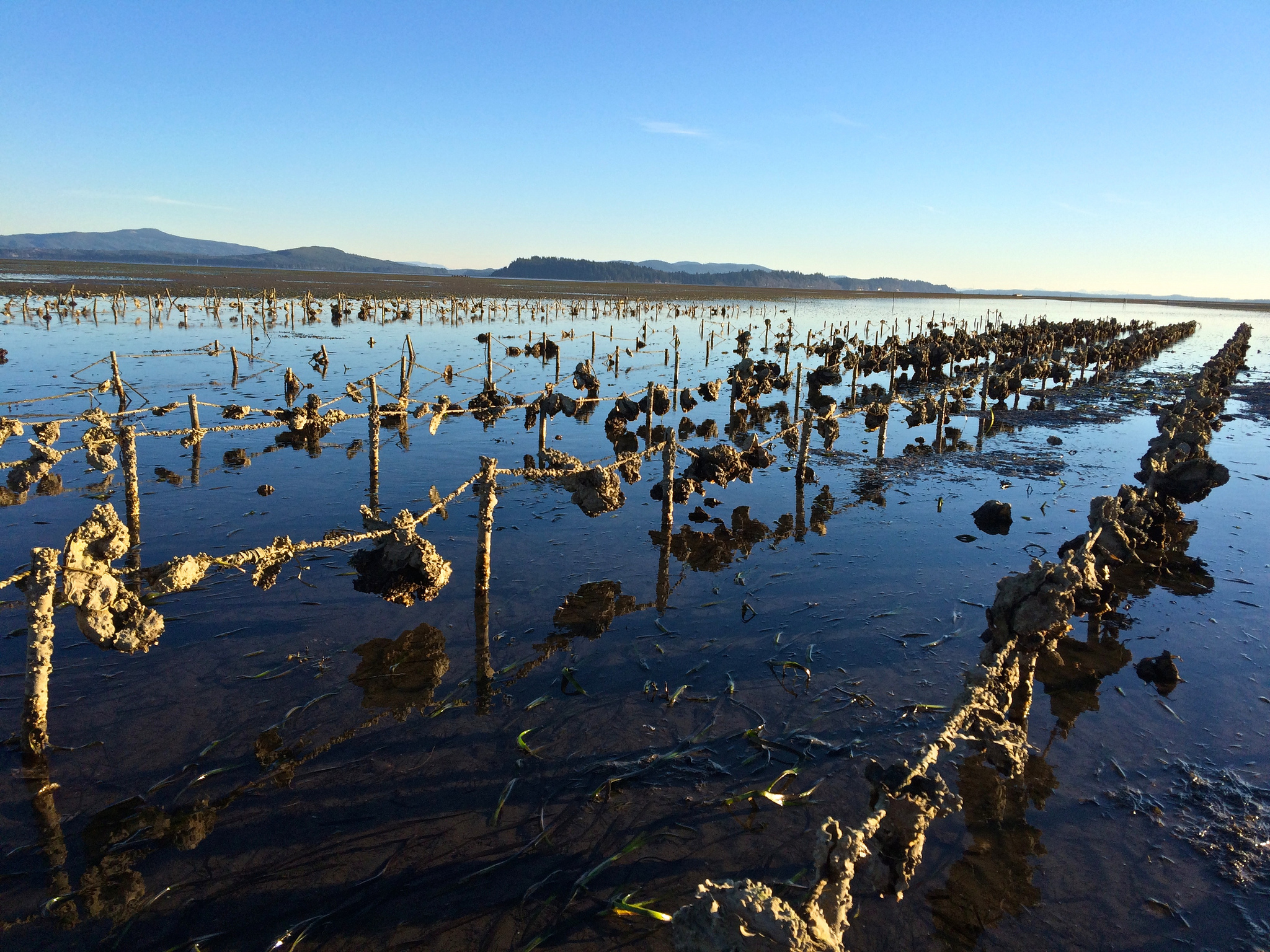 This is the last of a series of stories about Washington's oyster industry. The series starts here.

Oysters were on the menu at the “Clean Oceans = Healthy Seafood” conference in Seattle last March, hosted by chefs Tom Douglas and Thierry Rautureau. But the briny bivalves weren’t dished out on the half-shell. They appeared in a slideshow presentation by Amy Van Saun, an attorney for the nonprofit Center for Food Safety. Between photos of tractors on the sand and seemingly endless rows of plastic tubes along the shore used to grow geoduck, she noted that the number of shellfish farms has expanded dramatically over the past few years — and she believes that’s a turn for the worse.

Part of this growth could be thanks to the Washington Shellfish Initiative, a government program launched in 2011. The initiative includes measures to protect and promote shellfish aquaculture in the state, such as streamlining the permitting process for oyster farmers in order to make it easier for new growers to come onto the scene. The state also hopes, by 2020, to permanently re-open another 7,000 acres that have traditionally been used for recreational, commercial, and subsistence shellfish harvests (more on that later).

Some conservationists, like Van Saun, are not happy about the idea of further domesticating marine wilderness into commercial oyster operations. But oysters clean and filter water, and build reefs that can buffer against climate-change-induced sea-level rise. And here in Washington, expanding oyster aquaculture may, by necessity, require us to restore parts of polluted Puget Sound.

We like to think of oysters as “quasi-wild” — they’re raised in seawater, filtering whatever phytoplankton comes through the bays and inlets — but if you’ve been following this series, you know that oyster farming is a complex, highly engineered affair, a far cry from the natural resource harvest it once was.

“There is no baseline anymore, anywhere, for good, healthy, normal wild oysters,” says Alan Trimble, a University of Washington research ecologist who studies oysters in Willapa Bay. “We’re in a weird space in this continuum. At some point we’re going to have to admit that we’re actually farming.”

And farming, of course, entails changing the land (or sea) in order to better suit our own needs. Expanding oyster farms “means the conversion of natural tidelands, and more of the cumulative impacts of farmed shellfish,” Van Saun said. For example, research suggests that shellfish farming disrupts native species, such as eelgrass, in favor of the non-native, farmed ones.

In 2015 the National Park Service shut down the 80-year-old Drakes Bay Oyster Co. within California’s Point Reyes National Seashore in order to return the area to a more “natural” state, as detailed in Summer Brennan’s book “The Oyster War.” After the farm was closed, crews scoured the area in order to pluck the remaining bivalves out of the water.

Van Saun and others argue that certain aspects of oyster farming in Washington in particular are uniquely concerning. We’re the only state that has ever allowed the use of pesticides on tide flats, for example.

For decades, certain oyster growers in Willapa Bay used the insecticide carbaryl to attack ghost shrimp. The shrimp can decimate oyster beds, says India Simmons, a spokesperson for the Willapa-Grays Harbor Oyster Growers Association. Carbaryl use was disallowed in the early 2000s because it causes cancer. In 2015, growers and environmental regulators reached an agreement to use a new pesticide, imidacloprid, which is much less toxic than carbaryl, but is a known neurotoxin. Following considerable backlash from the public and from local chefs, the Department of Ecology rescinded the permit in early 2016, but many growers, feeling the decision could mean the end of their farms – and that the impacts of imidaclorpid have been overhyped – are again trying to get permits to use it.

But not all oyster growers use pesticides, and in many ways, oyster farming could be a force for advancing environmental protection on the sound.

Ironically, one of the main forces holding back oyster aquaculture elsewhere in the state is land-based agriculture. The 7,000 acres the Washington Shellfish Initiative would like to restore to oyster cultivation include about 4,000 acres in Samish Bay, south of Bellingham, much of which is farmed by tribal groups. These acres have historically been farmed, but are currently only conditionally approved for shellfish farming: When rain washes agricultural pollution into the bay, shellfish farmers can't harvest.

This runoff — a large part of which is livestock poop — doesn’t just impact the oysters, but also everything else that lives in Puget Sound. “Agricultural pollution is probably one of the most significant challenges that Puget Sound is facing today,” environmental attorney Andrea Rodgers, who was also at the seafood conference, said. And it has been difficult to get livestock farmers to clean up their acts.

Cleaning up Samish Bay would require collaboration among local, state, federal and tribal partners, says Julie Horowitz, policy advisor for the Washington Shellfish Initiative. Such collaborations are often difficult to achieve. More than 20 groups have been working to clean the Samish watershed for years, and the Bay still failed the Department of Health’s pollution evaluation last year.

But if you’ve read up on their history, you know that Washington’s oyster growers are not ones to surrender to a challenge. They did, after all, figure out how to proliferate an animal that doesn’t naturally reproduce all that well in our waters. And the initiative is already making headway toward its overall goal: Over the past four years, it opened up 2,429 acres of commercial shellfish beds that had been closed due to water quality in south Puget Sound’s Oakland Bay.

So maybe the oyster is such a valuable food, and farming it such a cherished tradition, that it can rally the effort to reduce the pollution that goes into Puget Sound. In other words, fighting for more farming of a highly engineered food on our shores could, paradoxically, restore Puget Sound to something that more closely resembles its wilder days.

Updated at 12:15 p.m. June 13 to clarify that ghost shrimp, rather than an insecticide, are the culprit in the decimation of some oyster beds.