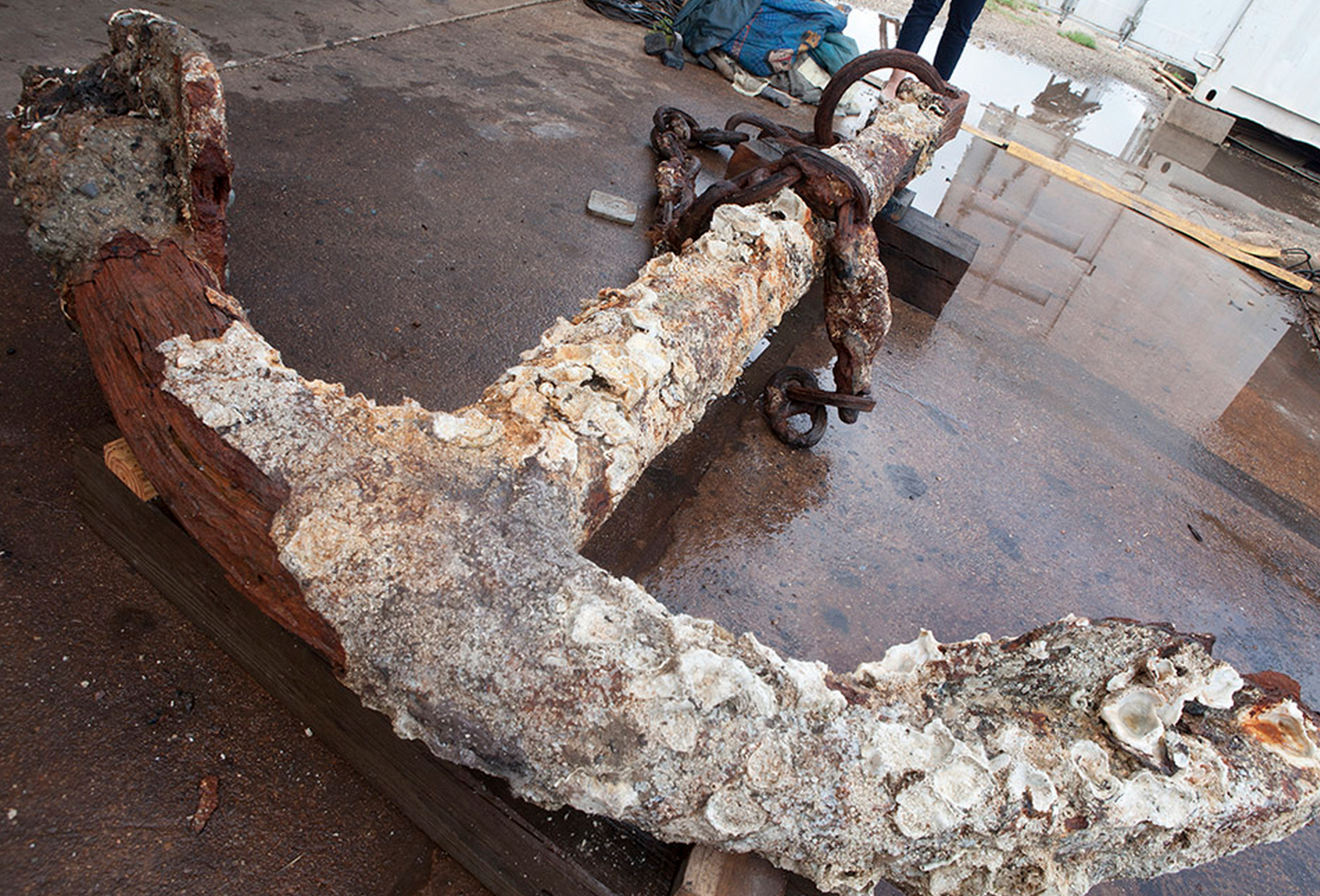 This anchor is believed to have belong to the HMS Chatham. Or maybe not.

On a clear day in June 1792, the first tendrils of empire were working their way through the channels and islands of Puget Sound. The British ship Chatham, one of Captain George Vancouver’s exploring expedition ships, was probing the unknown sound that he would name for one of his officers. Vancouver was the first European explorer to chart these interior waters.

The tides were running swiftly, more than 5 knots, and the crew of the Chatham tossed out an anchor to keep from being swept along. But the tide was strong and the Chatham felt its cable break. It lost its stream anchor, one often used to secured the craft in tricky waters. Anchors were incredibly precious things at the far end of the world, not easily replaced. The Chatham’s crew made multiple attempts to retrieve it, but it was lost. Lost to Vancouver’s expedition, and lost to history save for references to the incident in crew members’ journals.

The mystery of the lost anchor seemed like it might be solved, however, two years ago when an anchor of that era’s design was raised from the Sound’s bottom off of Whidbey Island. The relic was displayed briefly in Port Townsend and Seattle then shipped off for cleaning and analysis to the Conservation Research Laboratory, which operates under the auspices of the Center for Maritime Archaeology at Texas A&M. Media accounts said that it would take about 18 months before anything was known.

Scott Grimm and Doug Monk, the two locals who raised the anchor from the seabed, had researched accounts of the incident and checked historical records. The anchor had been commonly believed to be lost in Bellingham Channel, but Grimm made a case for the Chatham being at another location. The possibility of it being one of Vancouver’s anchors sent tingles down the spines of Northwest history buffs. Puget Sound’s story of European settlement and trade begins with Vancouver’s arrival. A one-of-a-kind artifact from that expedition would be an incredible Northwest maritime artifact.

So, what did the folks at the Center for Maritime Archaeology find? Jim Jobling at the center’s lab told me earlier this month that the conservation work on the anchor was complete and it was ready to be shipped back to the Northwest. Jobling says the anchor is the right dimensions in term of length and width to be the Chatham’s, but he says it is too heavy — nearly double what would be expected of the kind used in the 1790s. No makers' mark was found on it either. Jobling said he dates the anchor to the first quarter of the 1800s rather than the last quarter of the 1700s.

On the face of it, that’s disappointing news. If Jobling is correct, the anchor is too heavy to be Vancouver’s. But the possibility hasn’t been ruled out entirely. Grimm is still pursing research avenues. “We have two theories at this point. There is a chance the anchor was built heavier because Vancouver experienced the big tides in the Pacific NW on the Cook expeditions and had the anchor constructed heavier. The second theory is that the crew did not lose a stream anchor, but a small bower. There is journal evidence to this effect,” he tells me in an email. Even "small" bower anchors are much heavier than stream anchors.

An expert in such finds is Jim Delgado, national director of Maritime Heritage for NOAA who has been involved with shipwrecks from the Titanic to the Mary Celeste to the battleship Arizona. He also has a Northwest connection as former longtime head of the Vancouver Maritime Museum. Delgado says one problem is that the anchor is a stand-alone artifact; there’s no accompanying wreckage to help make an identification. With no markings or supporting physical evidence, there’s no smoking gun to say yes, this is Vancouver’s anchor. On the other hand, it is not absolutely not the anchor, though Delgado says he has a high level of trust in the research center’s experience in such matters. “They know what they’re looking at,” he tells me.

If not the Chatham, someone lost it. It could have been in the early 19th century, or it could have been much later. “People still drive 1950s cars in Cuba,” Delgado notes. Anchors of the era could last for the better part of a century, he says. Still, an anchor from the early 1800s is significant. “The anchor speaks to a time when the ocean facilitates the connection [of the Northwest] to the Anglo-American world” and to global trade — the beginning of the path we are still on today. Back then, we traded otter pelts to China; today Amazon sends packages around the world. It also signals the time when the world changed irrevocably for the Northwest's indigenous peoples.

Fur traders and explorers, documented and otherwise, were coming and going on Puget Sound in the early 1800s. Who were they? I asked Alicia Barnes of Puget Sound Maritime and she says the known Europeans nosing around the area were primarily American and British, but also likely included some Spanish and Russian ships. It could be that an account of a trading vessel that lost an anchor resides in an as yet-unread, unknown or un-translated log book in an archive somewhere. A deep dive into old records might hold the answer.

In the meantime, the definitive identity of “Vancouver’s anchor” is as murky as the Salish Sea itself.