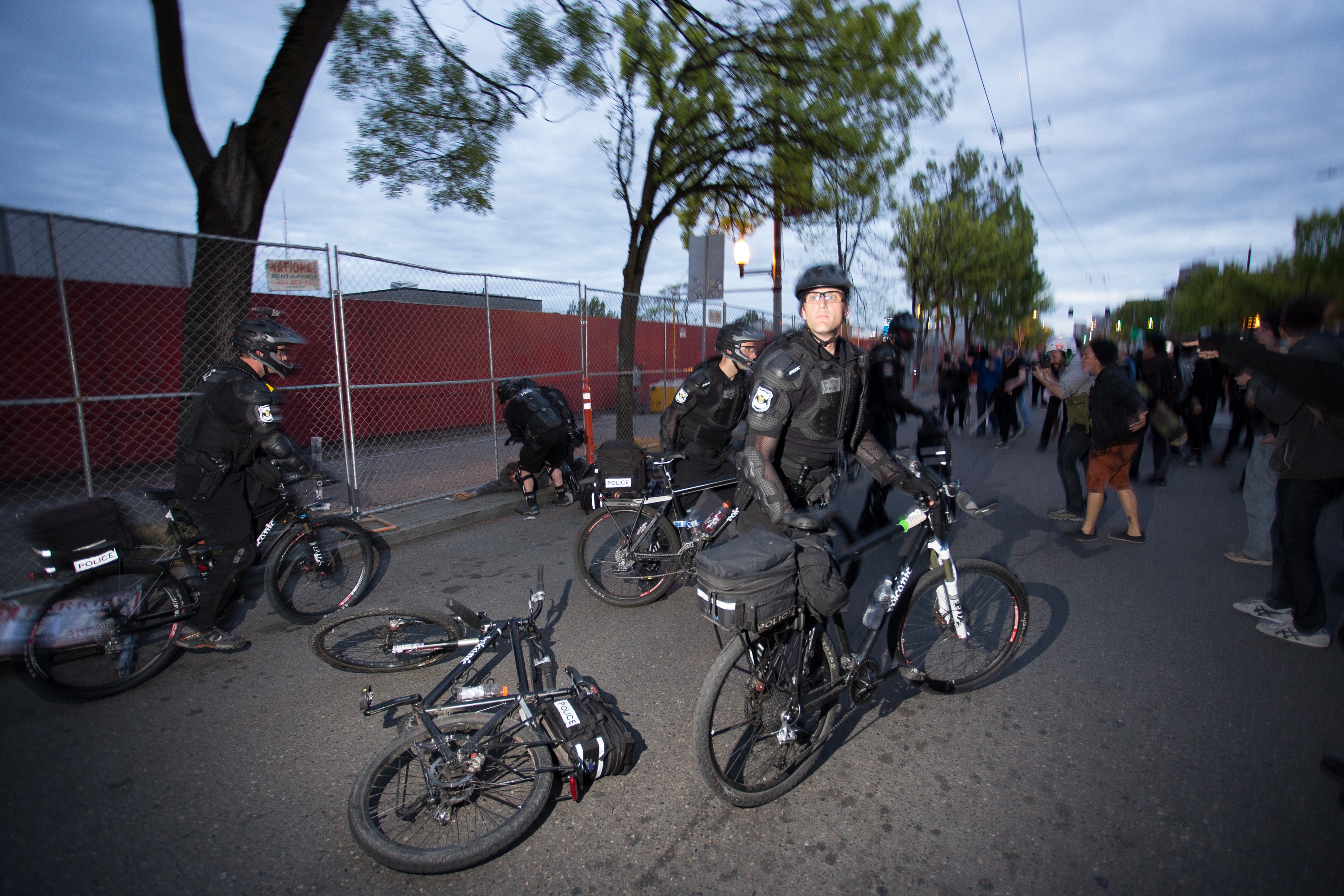 Bikes, meant to aid in crowd control, sometimes made the scene messier during the 2015 May Day demonstrations.

A civilian police advisory commission is calling on the Seattle Police Department to temporarily cease carrying blast balls, which are used for moving large crowds during demonstrations. The commission says the department needs to clarify its policies on how and when the small explosive devices are used.

The call comes after several demonstrators reported injuries from the balls at this year’s unpermitted May Day, anti-capitalist march. "Until such time as blast balls’ propensity for causing injury (including specific evidence from the past two years in Seattle), and their appropriate use given that risk, have been publicly weighed, we ask that SPD suspend their use," read the letter.

The balls are about the size of a pool cue, with a cap similar to a grenade. When police deploy them, a small warning crack precedes an enormous boom. The intended effect is to move crowds, often in response to perceived threats to people or property.

At this year’s march, police threw more than 20 balls. In some instances, it was a response to perceived threats; in other cases, it appeared to be an effort to herd the demonstrators out of downtown and toward the SoDo district, where there are fewer businesses subject to vandalism.

Over the last two May Days, protestors and citizen activists have raised concerns that using the balls are the equivalent of tossing indiscriminate explosives into large crowds. Although the blast balls are not meant to cause harm, the caps have the tendency to fly off and bits of the casings can scatter as they explode.

Alex Kasheyev, a young man not wearing the normal black balaclava garb of many of the protestors, walked with a heavy limp during this year’s May Day. He showed off a large welt on his calf where he’d been struck with the cap of one of these balls. He even managed to hang onto the piece that hit him.

This reporter was struck with a piece of an exploding blast ball on the face; it caused no injury.

The call for a suspension of the blast balls' use comes from the Community Police Commission (CPC), which formed under the consent decree on police reform with the Department of Justice. After several “Black Lives Matter” demonstrations in late 2014 and early 2015, the commission issued six concerns regarding SPD’s crowd management: including the targeting of leaders of demonstrations, disparate responses to demonstrators of different racial identities and “harmful use of pepper spray, blast balls and other projectiles.”

In response, the SPD arranged for the Center for Policing Equity (CPE), a research think tank that makes recommendations for improving law enforcement and community relations, to review how SPD polices demonstrations. The commission applauded the decision to bring in the UCLA-based center, but the results are still outstanding. SPD has said the timing of the results is out of its hands because CPE is doing its work for free.

The call to cease using blast balls until the policies and procedures are made more clear comes amid doubt that the Community Police Commission’s previous complaints were heard. In a letter sent to Police Chief Kathleen O’Toole, Mayor Ed Murray and others on Monday, CPC co-chairs Harriet Walden and Lisa Daugaard wrote, “While we don’t have firsthand knowledge of whether the changes we recommended were incorporated into the training (we were not permitted to observe the training), the injuries incurred by numerous non-violent observers on May Day 2016 indicates that further examination of the use of these tools is warranted.”

Prior to May Day 2016, SPD spokesman Sean Whitcomb told reporters that officers had received additional training on the use of blast balls, specifically emphasizing rolling them underhand instead of tossing them overhand. Still, several protesters complained the balls were still airborne. Local photographer Sam Levine had a significant cut on his eye, which he said came from a blast ball.

In order to regain its blast ball privileges, the CPC suggested, SPD must clarify its practices. For example, should the blast balls be allowed as a herding tactic, as was apparently the case as they did this year? What other modes of de-escalation could be deployed first? How can injury further be minimized?

In its response, SPD echoed an April memo sent to the Mayor's Office, which Whitcomb said would serve as reaction to Monday's letter from the CPC: “While we recognize the concerns over the use of blast balls, we also know from experience that, when compared to other available options, including hands-on uses of force in dynamic crowd control situations, blast balls often provide a less intrusive means of bringing volatile situations under control."

In the coming weeks, several city councilmembers will be meeting with some of the people reportedly injured during May Day. The CPC has become a powerful voice for community groups in Seattle and has the respect of the councilmembers with a strong social justice tilt.

The timing of this letter is largely the result of ongoing conversations the CPC has been having with SPD on the matter. Although May Day 2017 is a year off, the contentious presidential election is likely to add urgency to clarifying policies on demonstration management.