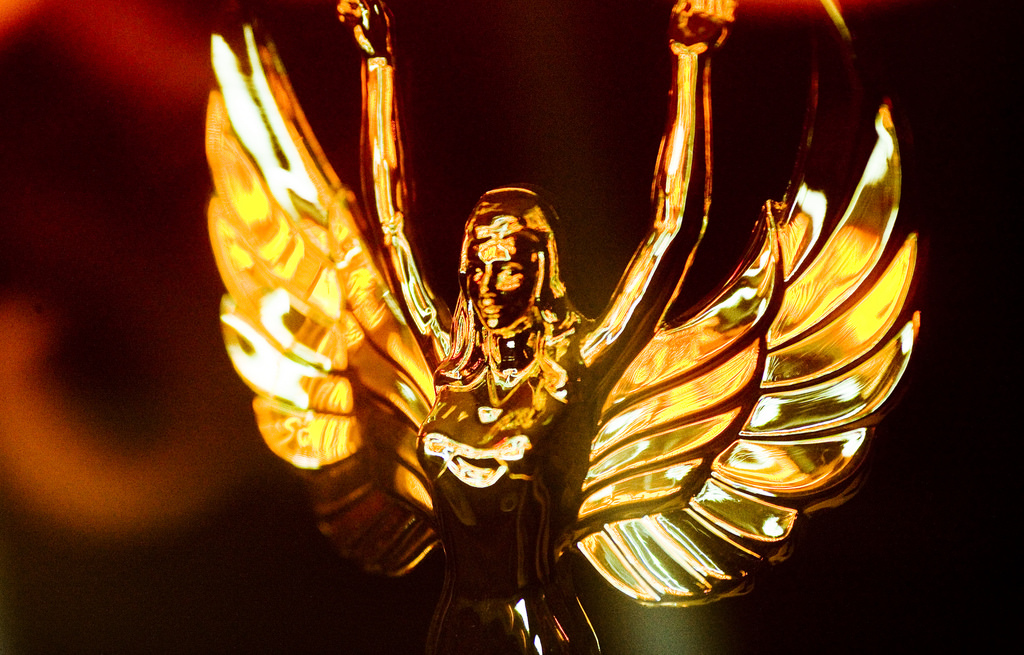 Confession: The actual SPJ awards look nothing like this. Also, we don't have a trophy case.

Crosscut’s writers have been raking in the awards this spring, a testament to their tenacity, commitment and complete abandonment of work-life balance through a year that saw some dramatic transitions for this scrappy nonprofit newsroom.

A few months back, we got word that City Reporter David Kroman won a second place prize in the national Awards for Excellence in Health Care Journalism for his story about the Odessa Brown health clinic, which serves Seattle’s scattering African American community.

Two weeks ago, we learned that Managing Editor Drew Atkins won a first place Excellence-in-Features award from the national Society for Features Journalism, for a story he wrote for Seattle Business magazine about how the architect of a major online fraud network made amends by committing federal crimes. Crosscut republished that story with permission, and really great visuals.

And this past weekend, Crosscut writers took home more than 20 awards in the NW Excellence in Journalism contest, which pitted us against small newspapers and websites in Alaska, Idaho, Montana, Oregon and Washington.

Winners included Atkins, who went home looking a little like Michael Phelps, Kroman, who was at a conference in New Orleans and couldn't make the ceremony (we collected his winnings), Mossback columnist Knute Berger, who sat the evening out (he apparently already has too much bling), and beloved and long-laboring contributors Mason Bryan, Mark Henshaw, Suzanne Jacobs, Laura Kaufman, Eric Scigliano, and John Stang.

Congrats to everyone for the much-deserved recognition — and a shout out to our colleagues, friends and partners who also took home awards. A few highlights: Marcus Green, founder of the South Seattle Emerald, won a first prize for his YES! magazine story about cities fighting to end the “school-to-prison pipeline"; SportspressNW founder Art Thiel landed a third prize for his feature story about the transformation of Chambers Bay from an industrial wasteland into a world-class golf course; the Seattle Globalist scored a string of first places for general excellence, business reporting, editorial and commentary, and social issues reporting; InvestigateWest hauled home just about every prize available for investigative and business reporting; and Seattle Weekly and Real Change both burned up the podium as well.

We should also note that Drew Atkins took home two more prizes for his Seattle Business magazine story. Knute Berger won a second prize for his “Gray Matters” column in Seattle magazine. And a week after destroying it at the regional Emmy awards, our compadres at KCTS9 public television/ EarthFix collected a few more accolades from SPJ for the Wildlife Detectives series and Ken Christensen’s story, “Could a mushroom save the honeybee?" (I dare you not to click on that headline.)

And now, without further ado, here are the Crosscut stories that won honors:

“The new Seattle, where everything looks like same,” by Mark Hinshaw

“Metro buses: Pedestrians in a blind spot?” by Laura Kaufman

"The public health dilemma of a fading black community," by David Kroman

"Metro buses: Pedestrians in a blind spot?" by Laura Kaufman

“Living in a micro-apartment — and loving it,” by Suzanne Jacobs

“Team penning, where the people drive the action but the cows often win,” by John Stang

"Racism and the Public Lands: The case of Coon Lake," by Knute Berger

“New film ‘Spotlight’ argues for journalism that can take on a system,” by Drew Atkins

“Fecal matter in the public water: The case of Snydar Farm,” by Drew Atkins

“Olympia For Dummies,” by John Stang

“Why some UW professors want a union, and others resist one,” by Mason Bryan

“The end of everything: The Harvard Exit takes its final bow,” by Laura Kaufman

“The end of everything: The Harvard Exit takes its final bow,” by Laura Kaufman