Star Trek at EMP: Not quite set to stun 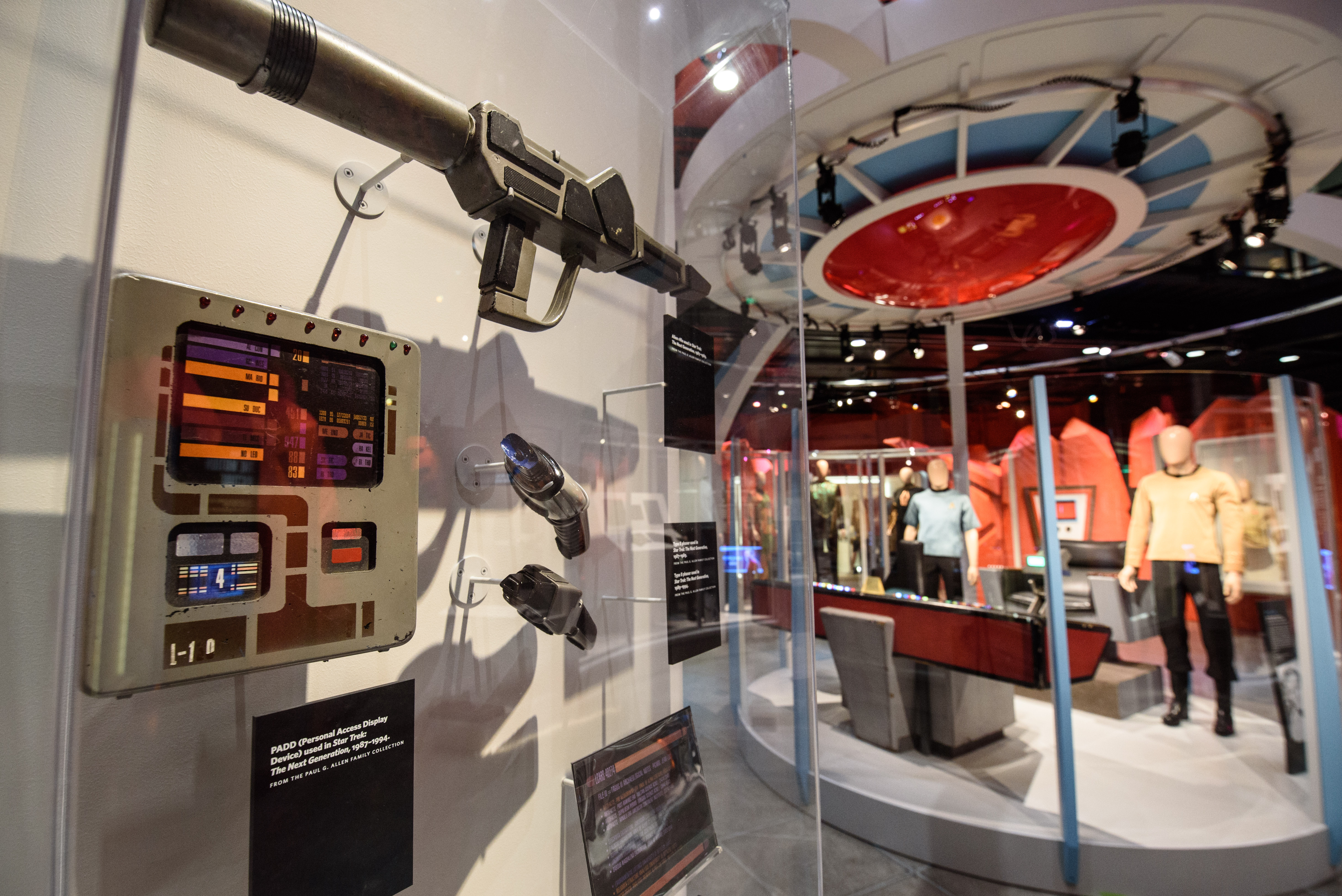 There’s usually a part in every Star Trek-related review where the writer says something like, "But Star Trek was about more than spaceships and phasers," and then discusses the social impact. But was it about more, really? Those phasers were pretty cool.

For the phaser enthusiasts and their ilk, there’s Star Trek: Exploring New Worlds, the new installation at EMP celebrating 50 years of the original show. The walls of the exhibit are festooned with more than 100 items from the series, including communicators and tricorders; enough costumes to film a spaghetti western episode of the show; sets that aren't shaking; models you want to steal; and for some reason, android character Data's detached head under a glass panel in the floor. A friend didn't want to walk over it for fear Data would see up her skirt, which is silly. He has no sexuality that I'm aware of.

Seeing the exhibit costs a staggering $27, including general admission. It's a bit high, especially if you live here and have already been forced to go to EMP’s Cobain and Hendrix exhibits every time one of your idiot relatives is in town. Ideally, the Star Trek exhibit would have an isolated, smaller fee. I mean, I'd pay $27 for a Fresh Prince of Bel-Air exhibit, or maybe Blossom. But not Star Trek.

While the installation is somewhat thorough, it could have used several other displays to warrant the price tag. For instance, there should be a part with a Spock model dying behind glass from the original Wrath of Khan, where you can recreate that horribly depressing scene. What about a Klingon kissing booth? Or a wall depicting all the crew members Riker slept with? I'm tossing out pearls here, no?

For fans, the exhibit will present a bit of a conundrum — they will want nothing more than to enter that futuristic world and step onto the Enterprise, but any behind-the-scenes look can inevitably remove the magic sheen, revealing gimcrack sets and Fisher Price-like props. Still, it's hard not to go.

At the center of the exhibit is the recreated Enterprise bridge from the original series, featuring the captain’s chair and a navigation console with those perfectly generic science fiction buttons. You can't sit in the chair, unfortunately. I suppose that's fair, since it has to be earned (by being a struggling Canadian actor). A fun booth in the corner allows you to recreate William Shatner's throaty "Khaaaaan!" yell from The Wrath of Khan, and have the clip emailed back to you.

You will no doubt notice a line leading to the transporter exhibit. That's the problem with transporters. Yes, they can instantly dematerialize and rematerialize you elsewhere, but there's always a line. People can simulate a clip of themselves being transported. I wonder how much bigger the line would be were it an actual transporter. I probably would have waited, and then just kept transporting to the front of the line.

It would have been nice if there was a holodeck exhibit, that magical room in Star Trek that could simulate any kind of reality. Obviously, the EMP version wouldn’t have been able to do anything, except allow thousands of attendees to make the same joke after leaving: “Maybe we’re still in the holodeck.”

For the “it’s more-than-cool-phasers” set, a large portion of the exhibit is also spent exploring the ideological aspects of Star Trek. As you may recall, Picard loved informing his alien guests that humanity had eliminated war and greed, which I always thought was the purest science fiction in the show, far more implausible than the transporter or the holodeck. Humanity may have eliminated war and greed, but the writers seemed to need them, since so many episodes featured one or both elements. It would have been boring otherwise.

Your enjoyment of the exhibit will depend on how much you actually care about the behind-the-scenes minutia. I don't even like watching my favorite actors being interviewed, lest they say something stupid. But any fan will get a bit of a kick from seeing gadgets close up, or crawling through the Jeffries Tube. Not necessarily a $27 kick, but a kick.

After visiting I texted a friend: "I think I dropped my wallet in the Jeffries Tube." He told me that I ought to be ashamed of that joke. I'm ashamed of all of them.