How the Columbia River Gorge was saved 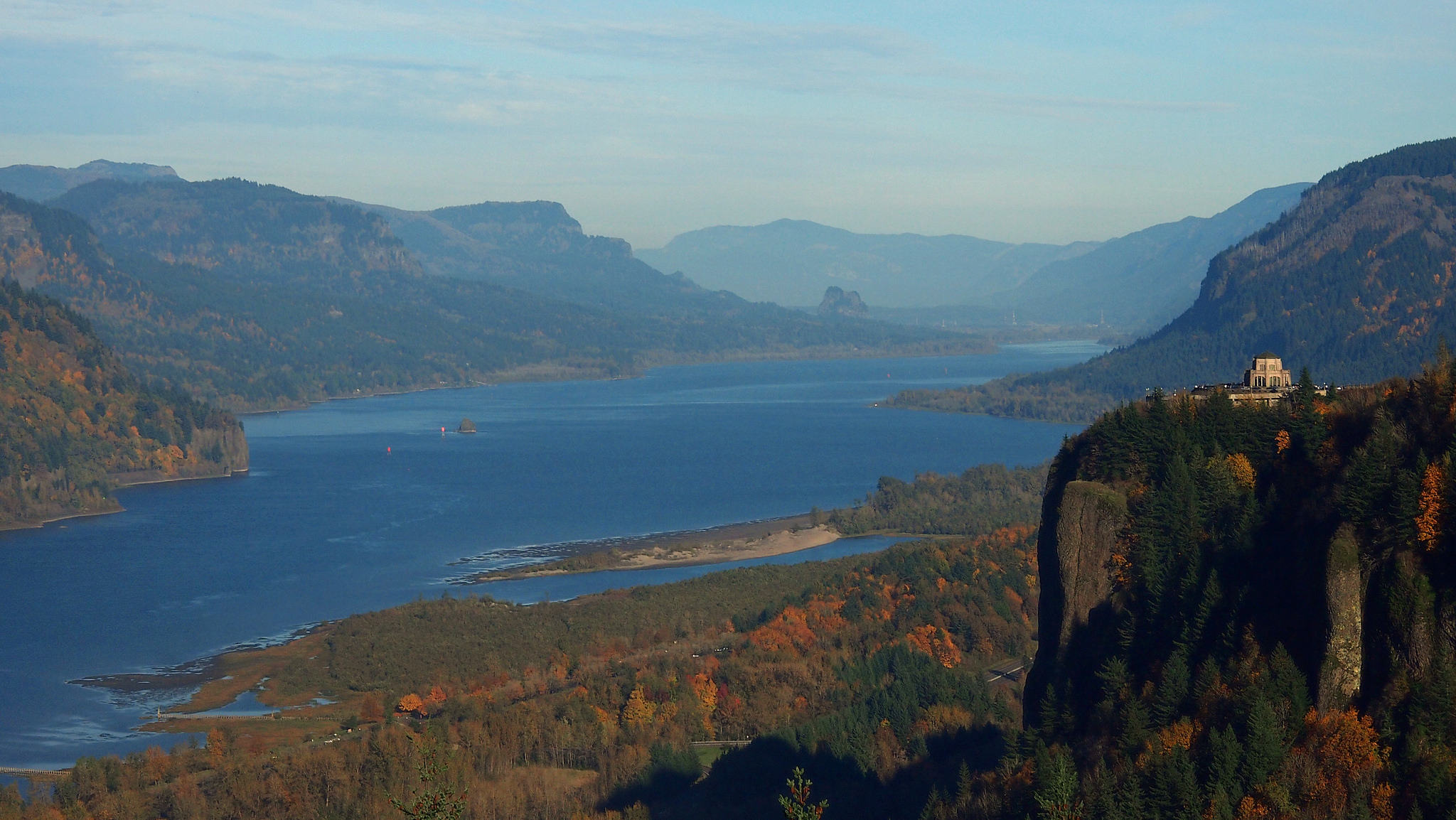 Smoke billowed from the wreckage of a Union Pacific oil train only yards from the Columbia River last weekend, emphasizing a nightmare scenario drawn by opponents of making the iconic Columbia River Gorge a fossil-fuels channel to Asian power plants and factories.

There were no human casualties or major property damage from the derailment at Mosier, on the Oregon shore, but the timing could not have been worse for the energy industry, nearing the critical decision points for a huge oil terminal in Vancouver and an equally large coal-export terminal in Longview.

The decision on the Vancouver terminal rests with Gov. Jay Inslee; the Longview decision faces local, state and federal agencies. Inslee is in campaign mode for a second term and, although his decision may not come until after November, he will face scrutiny from both sides of the export divide.

It’s the Democrats’ turn to influence if not decide the future of one of America’s prized scenic landscapes as well as one of its critical river systems. Across the Columbia from Inslee is Oregon Governor Kate Brown, also a Democrat seeking to remain in office (she became governor last year when Democrat John Kitzhaber resigned). A Democrat controls the White House, but the office is up for grabs in November.

While Inslee and Brown face vigorous Republican opposition from Bill Bryant and Bud Pierce, respectively, the conventional wisdom is that Oregon and Washington will likely remain Democratic after November’s election. It has, after all, been more than three decades since Republicans governed both states simultaneously.

But, for the protection of the gorge, the work of those two Republican governors proved crucial, creating one of the region’s big environmental victories.

On November 17, the region will celebrate that legacy, the 30th anniversary of the Columbia River Gorge National Scenic area, signed into law by a resistant but compliant Republican president, Ronald Reagan. It was the last of a set of groundbreaking policies and laws that I call The Oregon Story, but it had a Washington chapter as well.

The Gorge act had bipartisan support in both states but the Republican governors and a Republican senator put it together and finally got Reagan’s signature the day before the legislation was to expire with a pocket veto. The protected area stretches 85 miles across six counties and contains the most scenic and populated sections of the Gorge.

It nearly didn’t happen. The unfolding drama was high on my priority list for much of the 1980s, in my role as news analyst at KGW-TV in Portland, King Broadcasting’s Oregon outpost.

Like many Northwesterners at that time, I had discovered the Gorge before Interstate 84 was built along its southern shore. The historic Columbia River Highway, built from 1913 to 1922, wound above precipices and alongside waterfalls and it brought gasps and white knuckles from flatlanders like my North Dakota farm family when we became Northwest newcomers ourselves in 1947. Parts of the highway remain open today.

Protection of the Gorge became important in the 1980s as Interstate 205 snaked north through Portland suburbs toward the Columbia River and crossing into Clark County. Developers were sizing up scenic outlooks on the Washington shore and Washington’s Skamania County, east of Vancouver, approved a subdivision on a highly visible plot on the north shore.

Gorge protectors like John Yeon, a noted Portland architect, were alarmed. Yeon was joined in his love for the Gorge by a young Portland woman, Nancy Russell, a naturalist and a photographer.

Together, Yeon and Russell built a core of supporters and formed Friends of the Columbia Gorge, still a leading conservation organization in the Gorge and an active opponent of energy export proposals that would bring more coal trains.

Rivalry has been more prevalent than cooperation between the Pacific Northwest states over the years (witness the failure of proposals in recent years to replace the Columbia River bridge between Portland and Vancouver), and an original bi-state commission on the gorge had no power and no consensus. The threats implied by completion of the I-205 bridge force Gorge protectors to seek federal protection, and the battle was joined.

Led by Friends of the Columbia Gorge, an Oregon-based advocacy group, Gorge protectors originally sought National Park status. But the extent of development, particularly on the Oregon shore, and intense opposition to federal control on the part of rural counties in Washington forced dilution of the national park concept. At the beginning, even the idea of a federal role did not please the governors of the Gorge states. One was Washington’s Dixy Lee Ray, a Democrat but a very conservative one.

Economic factors worked in favor of development. The boomers had discovered real estate. It was only a matter of time before as many houses as the water table could support would be built. Courthouse politicians lined up with the builders. Gov. Ray and Oregon’s Republican Gov. Vic Atiyeh naively hoped local officials would somehow handle the onslaught, perhaps through a bistate agreement; the record of interstate cooperation in the Northwest was not encouraging.

The confrontational and strong-willed Ray rejected a federal role in the Columbia Gorge, and Atiyeh initially sided with her in 1980. Ray was easily the strangest major political figure I ever encountered, a marine biologist whose strong backing for nuclear energy caused President Richard Nixon to appoint her to chair the Atomic Energy Commission. Ray could be very forceful. She drove Atiyeh’s predecessor, Bob Straub, nuts when they crossed paths; both were Democrats, at least in name, but there the similarities stopped.

“For the first time in years, Oregon is following the lead of Washington on an environmental matter,” I commented on TV at the time. “The command is ‘Backward March’ and the troops are in line.” Six months later nothing had changed, and I warned, “Conservationists in the Gorge must wait for changes in governors before they have much realistic hope for their cause.”

My warning about the governors proved to be accurate; change began to come in an unexpected way.

Atiyeh was basically saved from a serious environmental blunder by the voters of Washington, who rejected Gov. Ray in 1980 after a single term and elected Republican John Spellman. Spellman, a quiet, thoughtful man who proved to be a remarkable conservationist, reversed Ray’s approach and began talking with his Oregon counterpart about protecting the gorge. This alone was a good sign. The gorge had never been a priority in Olympia — Washington’s population and political muscle lives along Puget Sound, whereas the gorge is Portland’s eastern portal.

Friends of the Columbia Gorge doubled their efforts as Oregon’s U.S. senators Mark Hatfield and Bob Packwood and Washington Senator Dan Evans — all Republicans — worked for a solution in D.C.. Hearings in the Gorge were tense, particularly in Skamania County, where the natives were adamant against Uncle Sam, and the National Park Service in particular. Friends chairman Nancy Russell stood in the midst of angry Skamanians and held her ground. But she needed help in Salem, Olympia and Washington D.C.

Gov. Atiyeh, prodded by Spellman, produced a solution to the deadlock: if rural counties didn’t like Uncle Sam, they did like Smokey Bear; the U.S. Forest Service was friend, neighbor and paymaster in Skamania County in particular. A scenic area was less restrictive than a national park, and although Skamanians held out to the end—the courthouse flag was flown at half-staff when Reagan signed the act—throughout the rest of the Gorge a sigh of relief was heard.

Behind the scenes was an intra-party struggle that foreshadowed the end of an era of moderate Republican control of the region. Republicans were at the helm at all the key decision junctions, a last reprise of an era in which the party dominated Pacific Northwest politics.

Senators Hatfield and Evans were members of the Senate Energy and Natural Resources Committee; more importantly, Hatfield also chaired Senate Appropriations, the body’s ultimate power position. The Senate Energy Committee was chaired by conservative Sen. James McClure of Idaho, with Sen. Malcolm Wallop of Wyoming an ally. Hatfield and Evans fought for the Gorge — Evans did most of the drafting, Hatfield the political logrolling. They had no other GOP support in committee; Democrats joined them to pass the measure to the Senate floor in a last-minute dash. Hatfield forced the bill onto the Senate agenda, a most unusual maneuver at the time, recalls former Hatfield aide Mark Walker, who worked the bill in committee. Republican Sen. Slade Gorton of Washington and Packwood joined to help in passage.

How did Hatfield “muscle” the bill to passage? Over the years, rumors of deals and threats abounded, but Walker told me only last week that the key was Hatfield’s appeal to fellow Republican (and Oregonian) Don Hodel, Reagan’s secretary of interior and a staunch property-rights conservative. Hodel and two other key Cabinet officers had urged the president to veto the Gorge bill — which fit Reagan’s worldview. Hatfield talked Hodel into reversing field and Reagan reluctantly signed the bill. Did the senator lean on the secretary? Behind his gentle demeanor, Hatfield was tough and he didn’t need to remind Hodel that he held Hodel’s budget in his hands or that Hodel may have owed his position to the senator’s influence. Walker doesn’t know what was said, and I certainly do not.

The two Republican lawmakers most prominent in opposition to Gorge protection — Oregon congressmen Robert Smith and Denny Smith (not related) — were staunch conservatives who would be more in tune with 2016 Republicans than with their moderate colleagues of 1986.

Three decades after its creation, the Gorge Scenic Area is home to a prospering economy on both shores, and recreation and tourism have become dominant employers in addition to traditional agriculture and government payrolls. The 13 incorporated communities are exempt from Gorge Commission regulations but 264,000 acres of farms and forests, home sites and recreational sites come under regulation by the commission and the Forest Service.

None of this was clear in November 1986 as Gorge supporters celebrated Reagan’s reluctant signature. It came as I completed my three decades of Oregon journalism.

The gorge bill was a farewell gift; it spoke to my love of landscape, open spaces, and special places. Outlooks and open space lured me to the Scottish Highlands time and again; the fjords of Norway were more compelling than a cityscape.

The gorge was not pristine; it was a vital, working area. But it was very special and I felt as if I had played a part in keeping it that way. I opened my commentary that day, “In this world where so much beauty has been lost to what we call progress, fortune has smiled on the Columbia Gorge.”

Parts of this article are adapted from Floyd McKay's new book, Reporting the Oregon Story: How Activists and Visionaries Transformed a State. The longtime Crosscut writer will discuss Northwest activism with historian and political consultant Bob Royer in an appearance at 7 p.m. June 16 at the Folio: The Seattle Athenaeum, 314 Fourth Avenue in Downtown Seattle. Tickets are $5 at the door.