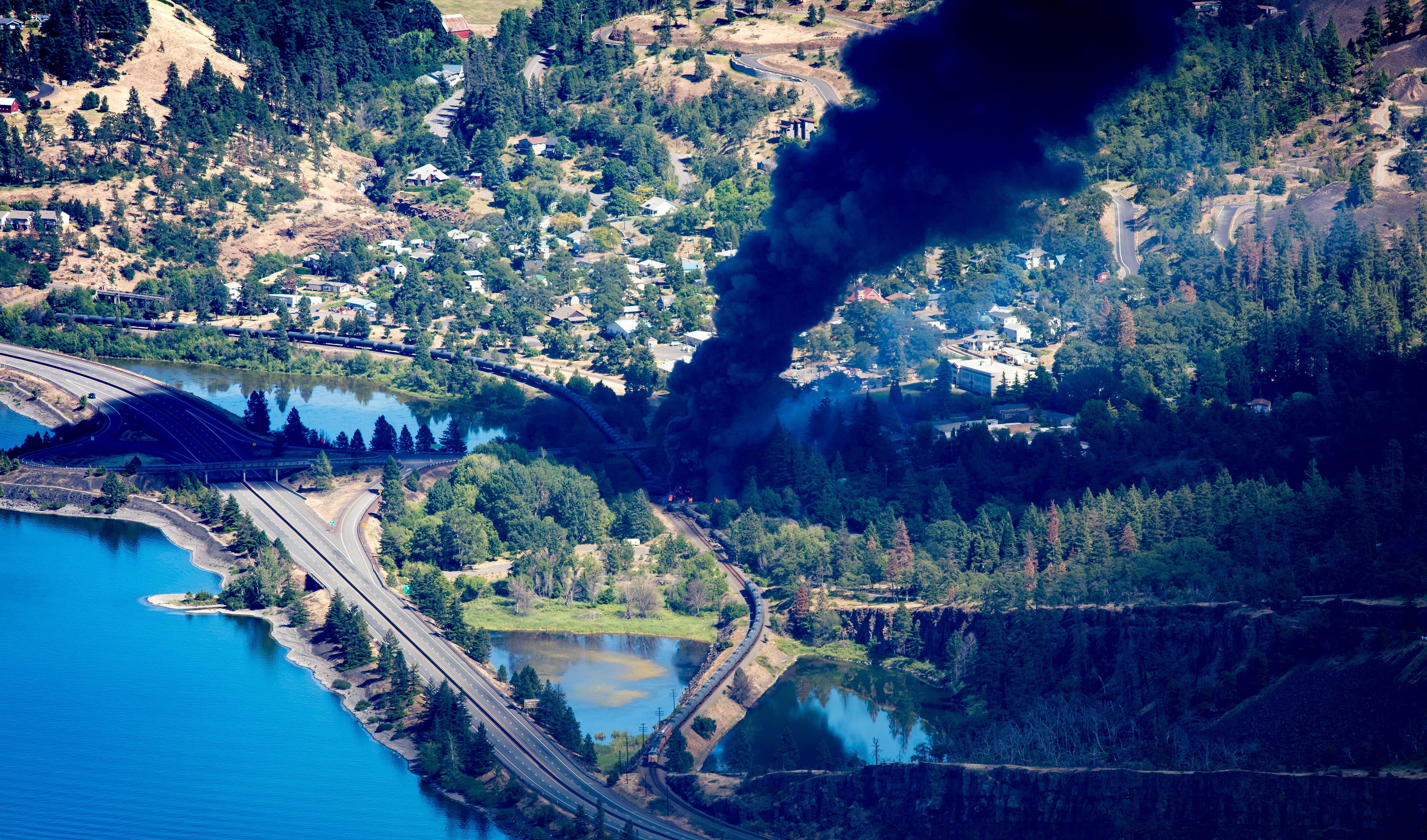 The fire in Mosier

The oil train fire happened in as good a place as any: Just far enough from tiny Mosier, Oregon, to spare residents any loss of life. And the fire stayed on the small side.

Things could have been much worse for Mosier. And just imagine what would happen if an oil train derailed in the middle of a major population center. The disaster could dwarf the explosion in Lac-Mégantic, Quebec, in 2013, that killed 47 people.

The National Transportation Safety Board, which investigates major transportation accidents and is charged with promoting transportation safety, has called for routing oil trains around cities "where technically feasible." Issuing the recommendation in January 2014, the NTSB'S chair at the time, Deborah Hersman, said that, given a dramatic shift of oil shipments to trains from pipelines, it was vital for routes to be "well planned."

In recent years, we've seen a shift in oil shipment from pipelines to trains, largely spurred by the development of North Dakota’s Bakken oil fields. Oil trains now pass through Washington population centers including Spokane, Vancouver and Everett. But Seattle is a prime example of a big city with a particularly obvious risk.

BNSF oil trains roll right by Safeco Field and CenturyLink Field, where tens of thousands of people gather regularly. The trains then roll under downtown, in a 111-year-old tunnel. Before rolling through the popular Golden Gardens Park and up the Coast, headed to refineries in Anacortes, they run through North Seattle’s Interbay area. That’s where several cars of an oil train derailed in July, 2014, right under the Magnolia Bridge, an often-busy and important piece of the city’s transportation infrastructure.

You could say we were lucky. And we have been, although Gus Melonas, a spokesperson for BNSF, will also tell you — quite legitimately — about all the measures that the railroad has taken to ensure that safety happens by design, not luck. Melonas says the company has made $15 billion in capital improvements in the past three years. A half-billion worth of track upgrades have been made in Washington state alone.

The city and the state are also getting smarter, demanding more safety and emergency preparedness measures. The Legislature, in 2015, passed a bipartisan bill that demands weekly advance notification to emergency responders of upcoming oil train shipments and expanding a tax on oil transportation to provide for oil train safety preparations.

Democratic state Rep. Jessyn Farrell, who worked with Republican Sen. Doug Ericksen to create the 2015 bill, notes that the state is now hiring more inspectors to check the condition of rails, a potentially big step toward preventing derailments and oil train fires.

Farrell thinks there is more to do, however, in ensuring that the speeds of rail trains are slow enough to prevent derailments, or — as happened by the Magnolia Bridge — keep them from being catastrophic if they occur. And while she wants to be sure that the state maintains or even improves its funding for safety preparations and equipment for fire departments, she thinks that BNSF could devote more money to upgrading intersections along the trains’ route.

On a radio talk show Monday, Ericksen hailed the bill as the most far-reaching state effort and, as Farrell acknowledges, the federal government has most of the control over railroad operations, limiting what the state can do. It certainly can’t tell railroads not to haul oil across the country, or to avoid population centers.

Even the National Transportation Safety Board can’t do that. It has the power to make recommendations, but the final decisions are usually in the hands of other federal agencies. An official of one of them, the Pipeline and Hazardous Materials Safety Administration, told a Crosscut reporter in 2014, that “when it comes to crude oil, the ultimate destination is a refinery, and most refineries are located in areas that are populated.”

In our case, that’s Anacortes, and it can only be reached by oil trains going through even bigger cities along Puget Sound. And BNSF is not going to unilaterally rush around planning new routes around cities and financing the construction itself. Asked about the safety board’s recommendation, Melonas said, “That would be federally mandated.”

Given the federal government’s track record on these issues, progress is bound to be slow. The NTSB has been pushing since 1970 for more on “positive train control,” where, for instance, a GPS-based system can automatically stop a train in the case of a life-threatening error by an operator. It has had only partial success, however, and recently renewed its call for much wider implementation of positive train control, pointing to human error as the key factor in the 2015 Amtrak crash near Philadelphia that killed eight people and injured 200.

So, as daunting as a call for having oil trains avoid cities may sound, it’s likely that the NTSB will keep raising the issue.

Farrell, for her part, says there is another way to push the day of no oil trains in cities forward: working together to develop cleaner energy sources. “We know how to a lot of this stuff,” she says. “And it is just a matter of public, private and individual commitment to doing it.”

Oregon Public Broadcasting and Katie Campbell of Crosscut’s sister organization KCTS 9 and EarthFix, put together this video about the Oregon spill: