After Orlando, some grieve, others buy guns 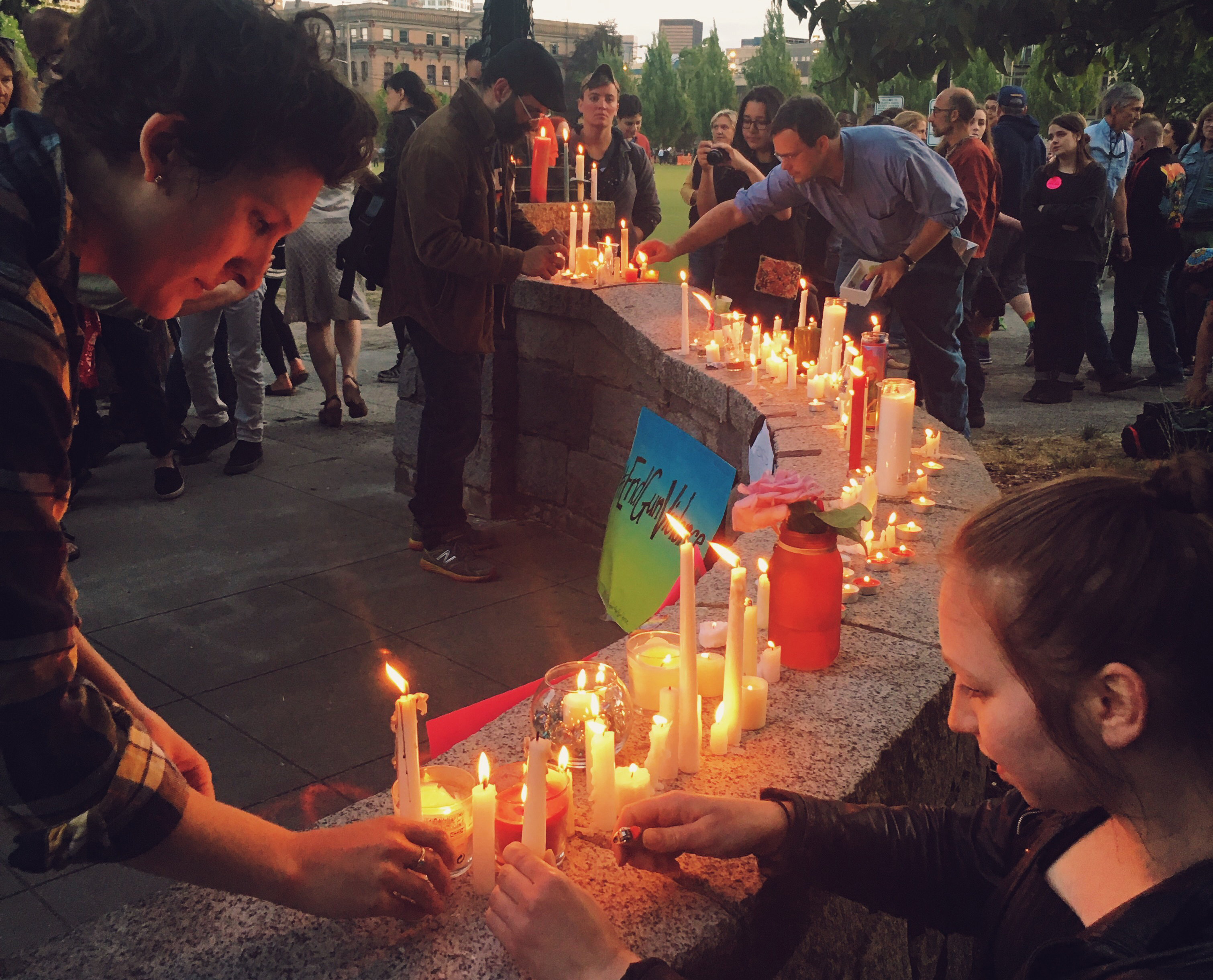 Over a thousands gathered at a vigil for Orlando Sunday evening.

Twelve hours after the largest mass shooting in modern American history, in which 50 people in an Orlando gay nightclub were gunned down as they danced, eleven men browse Lynnwood Gun and Ammunition off Highway 99. It's a short walk from both a middle and high school. For a store of its size, eleven people is enough to overwhelm the staff; a small line forms as the shoppers wait their turn. “Slammed,” a clerk behind the counter says.

Orlando is nowhere in this room. The television is cued to a man polishing an ornate rifle. The clerks educate their customers in detached terms. A man in his fifties is in deep conversation with a clerk about a Glock. In the corner, another man has the instructions for his newly purchased pistol laid out before him, walking himself through it like a piece of furniture from Ikea.

This particular store carries shotguns with barrels so short no marksmen could touch even the fattest goose; pistols with muzzles as long as your forearm; and yes, a few used AR-15 rifles, the same kind of semi-automatics used in Sandy Hook, Aurora, San Bernardino and now Orlando. After shootings, sales of these guns, which are meant to target people, tend to go up.

I’m not just an observer. A month from now, I’ll be in polar bear country in northern Canada. I don’t want to buy a gun, but park rangers, law enforcement and members of the first nations communities have told me it would be silly not to. A 12-gauge shotgun with heavy slugs, they’ve said.

So I tell the man behind the counter what I’m looking for, and ask him how long the process will take. He says, with a great deal of pride, that my background check will take ten to fifteen minutes — faster on a less busy day. “You’ll walk out of here with a gun,” he says. In ten to fifteen minutes I can sit in my car, load six slugs into a shotgun powerful enough to stop a polar bear and drive south on Highway 99.

Six hours later and fifteen miles away, at least a thousand people filled the sloping lawn north of the ballfields in Cal Anderson park. The sun was just over the treeline to the west. As the long light faded, the candles in the hands of mourners seemed to glow brighter.

Capitol Hill will always feel distant from the microcosm of gun culture I witnessed north of Seattle, at Lynnwood Gun and Ammunition. But on Sunday, they were on different planets — on one planet, a mass of people, moved to come together by the morning’s news; on the other, a small group of men, carrying on with their right to a firearm.

The Orlando attack was the single largest act of violence toward the LGBT community, and the focus of the vigil tilted toward specific support for that community's members. But although the vigil was colored with LGBT flags, it was clearly about much more than one community. For those who’d come out, this was about all people whose identities put them at risk, be it their gender, skin color, class or beliefs.

It opened with a song: We Shall Overcome. It cast a spell that did not break for an hour. Both Seattle Mayor Ed Murray and Gov. Jay Inslee — neither known for their public speaking — gave as powerful speeches as either has given since they took office. Murray, Seattle's first openly gay mayor, focused on the strength of the LGBTQ community, and Inslee on the empathy of Washingtonians. “There are 7 million Washington hearts in Orlando tonight,” said Inslee. Both called for action.

Kevin Gallagher, a local kindergarten teacher, stood at the vigil alone. His husband was out of town. Through the service he fought tears, often losing. Strangers held his hand and gave him hugs. A woman in a wheel chair whispered, “God bless you” to him, offering her candle when his went out.

As a gay man in his middle age, Gallagher has been through a lot. He’s had a gun put to his head, he says, in just one of the instances of violence he’s faced because of his sexuality. Glued to the television most of Sunday, the Orlando shootings brought a lot of that pain back for him. By Sunday evening, it was too much, so he came to the vigil. “I just felt the need to be around other people,” he says.

For all the famous names in the park Sunday, one got the sense that Gallagher’s need for community was the principle reason for the enormous crowd — people needed to be near other people. Someone would occasionally shout “I love you” to no one in particular and the call would echo through the audience. Someone near the microphone began counting. By the number ten, the crowd understood this was for the people who had died and joined in. Even after the speeches ended, people left slowly, hesitant to lose the tangible connection between a thousand grieving people.

I suppose I knew Washington’s rules, somewhere. But it’s not until I’m holding a heavy-duty firearm that the disconnect between the power of this tool and the ease of its purchase hits home. Transferring the title of a car, filing taxes  — these are much more challenging than getting this gun. Why, I wonder, would I need this in ten to fifteen minutes? I have made many bad decisions in the course of ten or fifteen minutes.

The emotional calls later that evening for more gun control will not echo this far north, even though, statistically, it is from places like these the publicized killers get their guns. In fact, Washington Navy Yard shooter Aaron Alexis and Aurora theater shooter James Holmes used exactly the gun I’m interested in buying as they killed a combined 24 people.

I don’t buy one, not today. It’s a practical decision — they don’t have what I need for what I’m willing to pay. But I’m relieved. I will still buy one in the coming weeks, but the rift between this room and the dead people in Orlando is too much.

It's always hard to know how far the ripples will travel. Sunday's vigil was powerful — so powerful, in fact, that at the time it was hard to imagine it could not spur action.

But, then again, we've been here before.