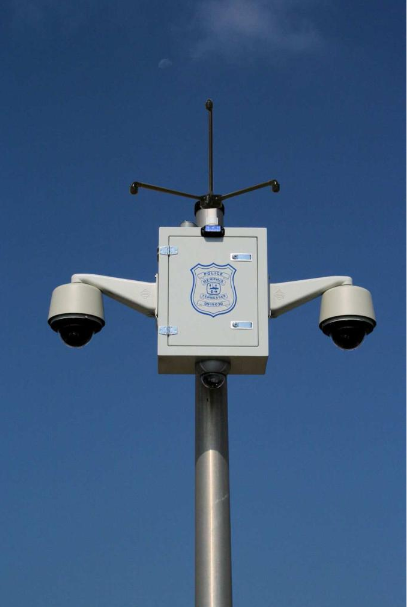 The SkyCop Gunshot Enclosure System has audio and video components.

On a breezy afternoon, Mayor Ed Murray stood outside the Rainer Beach Community Center, steps from Rainier Avenue. He emphasized the importance of violence prevention, pointing to youth jobs programs and outreach. But the point of Thursday was not to expand the proactive response to gun violence, but the reactive.

Community members in the Central District and Rainier Valley, Murray says, “have urged us to explore new technology that other cities are using to respond to gun violence. He was flanked by Seattle Police Chief Kathleen O’Toole, councilmembers Sally Bagshaw, Bruce Harrell, Lorena Gonzalez and, in an apparent change of heart on the technology, Tim Burgess. Murray was also joined by several community members, including Reverend Harriet Walden of Mothers for Police Accountability and Rabbi Daniel Weiner.

The technology, which Murray and Chief O'Toole promised has improved enormously over the last several years, is a network of microphones, meant to detect the location of gunshots and report them immediately to the police department. Corresponding cameras flip on, in an attempt to identify the people who fired the guns.

Pending council approval, the system would begin as a pilot program in the Central District and Rainier Valley, where gun violence is most common. But, as with many new law enforcement technologies, proponents of the gunshot locators will have a hard sell to both privacy advocates and the deeply skeptical residents of the most diverse parts of Seattle.

The system provides a razor's edge line that forces community members to face what concerns them more: the terror of gun violence or the specter of an intrusive technology and uncomfortable questions of race.

Seattle's consideration of this technology goes back to 2012, in the days of then-Mayor Mike McGinn, who budgeted $1 million for a system. But, led by a skeptical Councilmember Burgess, the council cut the money. When the council considered studying the technology again in 2014, Burgess still had doubts. “I have not seen evidence that gunshot-locator systems reduce gun violence or contribute to a higher rate of arrests,” Burgess told the Seattle Times at the time. “That is pretty well established.”

Burgess gives a few reasons for the shift in his thinking. First, the technology has improved. “The acoustic capabilities have been refined pretty dramatically so that there are almost no false reports,” he says. Also, the addition of cameras makes Burgess more confident in the technology’s effectiveness.

Perhaps most important is “the federal government offered to pay for the pilot.” The Bureau of Alcohol, Tobacco and Firearms (ATF) will put out a request for proposals to three vendors. Over the next year, as the technology works through its pilot phase, ATF will write the check.

To a certain extent, Seattle is late to the game when it comes to gunshot location. Dozens of cities, including New York, Boston and Los Angeles, have deployed the technology and Murray highlighted their successes. Places like Denver and Kansas City want to expand use of the microphones.

But in some corners, there is doubt that the money is worth the payoff. A piece from the Center for Investigative Reporting posits that while the technology indeed alerts law enforcement to shots fired, it rarely leads to arrest. In San Francisco, for example, 3,000 gunshot reports resulted in just two arrests over two and a half years.

Theoretically, as Burgess mentioned, the addition of a camera system to the microphones could help police actually identify who fired the gun and which direction they headed. But, to some degree, the point isn’t always to catch the bad guy. As Dominique Wheeler-Davis, founder of the 180 Program to divert young people from criminal justice prosecution, told Crosscut earlier this week, many shots fired go unreported. And when they are, police often have trouble finding the exact location of the shell casings, which are helpful in investigations. To that avail, even if the gunshot location system does not necessarily result in arrest, it could give police better leads and a better picture of exactly how many shots are being fired. And if the technology is as refined as Burgess says — with the ability to ignore car backfires and fireworks — that picture could be pretty clear.

Moving forward, opposition will likely wear a number of hats. The most obvious is from civil rights and privacy organizations, who have already raised serious concerns about permanent surveillance technology. In a statement Thursday, Shankar Narayan, ACLU of Washington technology and liberty director, raised a number of questions, including “what data will be collected, how long will it be stored, who will have access to it, and will it its use be restricted to the particular purpose it’s being deployed for?”

Narayan also wondered “whether this is a cost-effective investment based on real data, or whether programs directly addressing the root causes of violence — such as gang prevention and intervention, substance abuse, chemical dependency, or housing programs — will be more effective in solving those problems.”

City officials will also need to work closely with residents of the Central District and Rainier Valley. It’s a precarious balance because these are the historically African American parts of Seattle. And while those residents desire safety, they balance that desire with the privacy issues and the uncomfortable questions of disproportionate policing among minority communities. Plus, at least for Carolyn Brown, there's the feeling that acoustic location is a band-aid on the community’s more deeply seated issues.

Brown, who came to hear the mayor's presentation, is African American, grew up in the Central District, but has lived on Beacon Hill for 30 years. Gunshots are a common part of daily life for her. “I want the gun shots to stop,” she says. “I hear them every night. I do.”

Brown appreciates what the mayor and the technology is trying to accomplish, but she’s also thinking of the bigger privacy issues.  “I was sitting talking to my husband last night and I said, if they have technology that can actually pinpoint a gunshot coming out of my house … at such and such a time, you cannot tell me that they don’t have the technology to sit there and listen to a conversation in my house.”

On top of Brown’s fear for her privacy, there’s also a deeply etched skepticism of anything having to do with Seattle’s motives, borne out of many years of watching her childhood neighborhood change and her neighbors priced out. “The African American community have been totally priced out,” she says. “If more people with money were not moving into this community, do you think they’d want this technology?”

Brown sees this as a grooming of the neighborhood before the rich people move in.

It’s a weighty accusation that would be hard to prove, but not a unique one. Anthony Lemon, also a Rainier Valley resident, harbors similar doubts, especially about what the city can and will do, pointing to perceived slow response times in his neighborhood. “The guy fires a weapon,” he says, “He’s supposed to be here when the cops arrive? He’s on the move!”

He adds, “I’ve never seen so many politicians down here.”

Murray and several councilmembers insisted the technology would be filtered through the city’s race and social justice initiative. Additionally, when asked about the city’s standing ordinance that restricts surveillance technology, Murray said he would work with council to make sure everything lines up. (Burgess believes it does, namely through the ordinance’s exigent circumstance exemption.) As a pilot program, the future is not written in stone, and Murray said if neighborhood support isn't there, they won’t proceed.

It's not entirely clear how the proposal will arrive before council, but representatives from Murray's office estimated 60 days before it would.