Seattle media all in on #SeaHomeless project 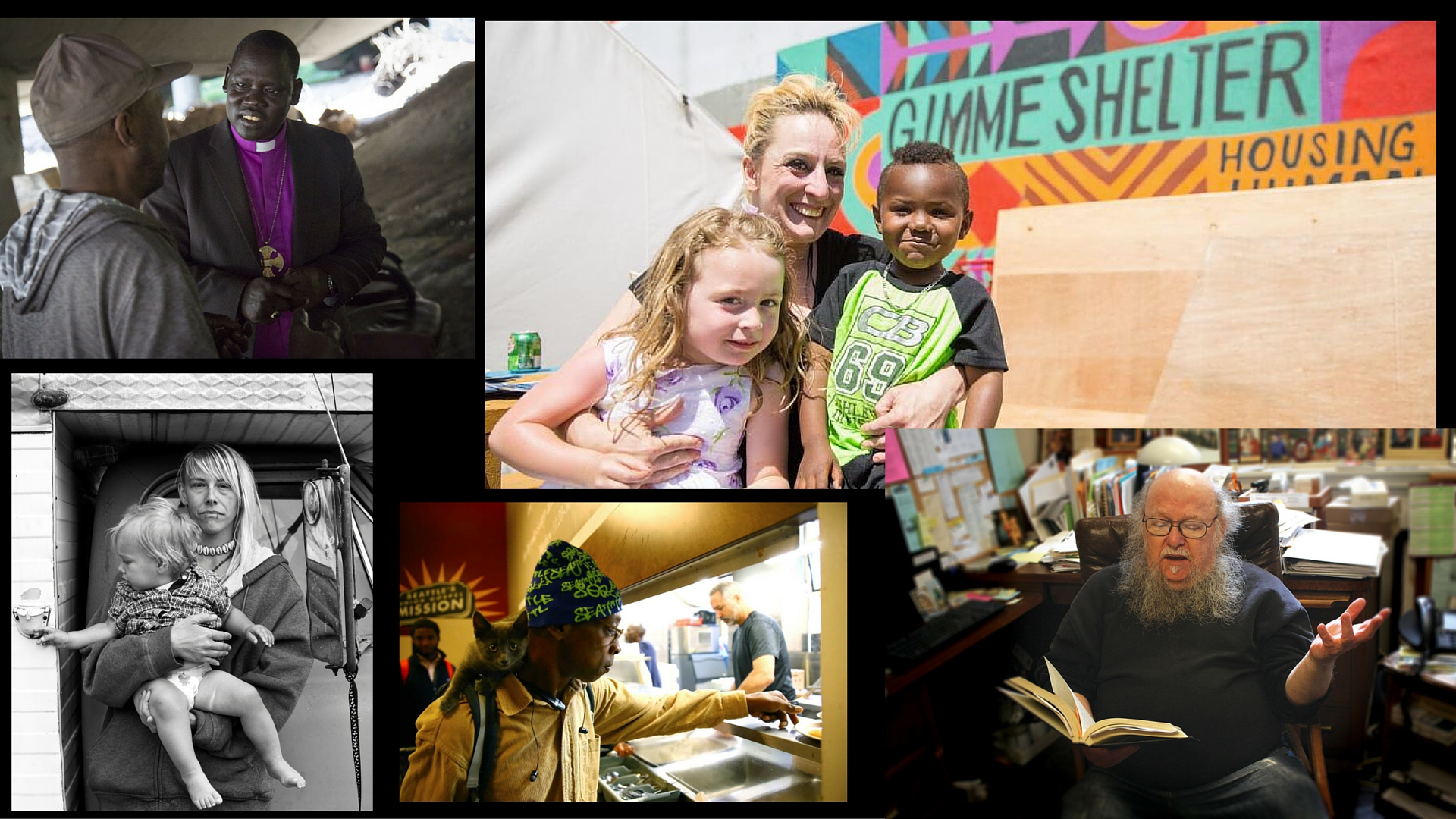 Roughly 30 Seattle-area news organizations joined forces yesterday to shine a spotlight on the region’s homeless crisis. The result: At least three dozen original stories that appeared online, in print and on the airwaves, from outlets including The Seattle Times and SeattlePI.com (just like old times!), commercial television stations, public radio, and a host of small online outlets.

Not everyone did original reporting. Some organizations pulled together collections of past work on the subject (KCTS9.org, Seattle Channel, Seattle Globalist), resurfaced previously published material (The C is for Crank, PubliCola at Seattle Met), pointed their readers to other media’s work (International Examiner) or added to the conversation on social media (CHS Capitol Hill Seattle, Grist, KBCS, Seattle’s Child, The Stranger, YES! Magazine). Facebook and Twitter were ablaze with the hashtag #SEAHomeless.

Seattle Weekly orchestrated an online question-and-answer session with Joe Bernstein, a man who has struggled with homelessness for many years (read highlights here). KUOW created a Facebook group "where anyone may ask a question about homelessness. But only people who have experienced it may answer." Real Change organized a rally at City Hall. Dozens of local nonprofits, foundations, and other community partners pitched in to spread the word.

What did we accomplish? That’s hard to say. It often is in this business — and as one person pointed out on Twitter, “you can’t build shelters out of hashtags.” But we hope that we at least helped expand our own, and our community’s, understanding of the people who subsist in our streets, and perhaps what we can do to help.

I’ve endeavored to collect all of the original reporting that was done for this project, which we called Homeless in Seattle. I’m sure this list is incomplete. I’ll update it over the course of the day as I learn more.

At the Doney Memorial Pet Clinic who’s healing who?

The Pioneer Square clinic offers free pet supplies, basic veterinary care and armfuls of compassion for people and their pets caught in the grip of homelessness.

Homeless in Seattle: The roots of a crisis

At last count, there were 4,500 people living on the streets of Seattle and King County. It wasn’t always this way...

It's been more than seven months since Seattle Mayor Ed Murray declared a state of emergency around the issue of homelessness. What have we accomplished, and where this is leading?

Photos: The faces of homelessness

UW prof speaks of her own homeless experience

In a new book, University of Washington nursing professor Josephine Ensign tells her own story, and those of homeless people she has worked with as a nurse.

Groups focused on social issues — and homelessness in particular — are getting creative in adapting and building technology that serves humanitarian causes.

The Mary’s Place Family Center brings non-profits in to offer more than 50 different social services to the homeless all under one roof.

A $1 million award, announced Wednesday by the Paul G. Allen Family Foundation and Compass Housing Alliance, could guide the future of transitional housing in Seattle.

He moved here to retire, he ended up on the street

Troy Morgan and his sister Robin Morgan moved from Las Vegas. After experiencing high Seattle costs, they moved into a tent encampment because they didn't want to split up.

Mayor Murray to Seattle's homeless: 'We want to work with you'

“We are trying everything we can to find a way to get the help that you need."

Sharon Jones made a macaroni model of a housing project. It has 1,238 rooms.

A Moment on the Street with Roni

A tale of an encounter with a young woman living in her vehicle.

The headline says it all.

Mobile homes: an important hidden source of low cost housing in Seattle that must be saved

The headline says it all.

Solutions to homelessness: the problem is not intractable

580 Seattle households live in manufactured housing and many face homelessness unless the city steps up to enact laws to preserve this valuable resource.”

A photo gallery by architect and homeless advocate Rex Hohlbein

Why Summer Vacation Can Mean Empty Plates for 4,000 Seattle-Area Kids

For homeless kids and young adults, “school’s out for summer” often means that consistent access to healthy food, provided through school-district meals and other school-based programs, is cut off.

The story of a homeless, single mother: Ronda Althaus.

Seattle Mayor Ed Murray says the city will not force individuals living in the city’s most infamous homeless camp — known by some as “The Jungle" — at least not until more efforts are made to convince them to accept services.

A profile of the Low Income Housing Institute owns and manages over 1,800 affordable apartments in the Puget Sound region.

Homeless in Seattle: The roots of a crisis

At last count, there were 4,500 people living on the streets of Seattle and King County. It wasn’t always this way...

6 subtle (but important) ways you can help unsheltered folks today

A reminder that homelessness in and of itself isn’t a problem, but rather, one painful, apparent symptom of a whole lot of smaller, harder-to-see problems — and a call to action with direct steps for how you can help.

Seattle's rolling homeless: A stone's throw from the sidewalk for some

A spectrum of RV dwellers who populate not only city-sanctioned parking zones and lots, but also many residential streets around the city.

Seattle Mayor Ed Murray said Tuesday that he won’t evict the remaining people, so long as they stay out of the way of state maintenance workers.

Breaking the mold on homeless shelters?

Sex, drugs and freedom: Why we fail to fix homelessness

How can we solve homelessness without demanding that people who are homeless stop being as messily human as everyone else?

In July, Seattle will launch what it hopes will be an improved, coordinated system of connecting homeless people to housing. A particular challenge will be taking care of the largest segment of the homeless population: single adults.

There are about 100 people still in The Jungle homeless encampments, and Seattle Mayor Ed Murray says he won’t force them to go elsewhere.

What you need to know about Seattle’s homeless crisis

The Seattle Times is joining media in San Francisco in featuring coverage about homelessness on Wednesday. Get up to speed on the crisis here.

Compass Housing Alliance, with help from billionaire Paul Allen, will use steel modules to build a new community for the homeless in Seattle.

A day focused on those we forget

Seattle Weekly joins more than 20 other news organizations to shine a spotlight on homelessness.

When it comes to emergency homeless spending, is the city getting its $6 million worth?

Seattle has dedicated roughly $6 million in emergency funds to addressing the issue of homelessness. What have we accomplished, and where this is leading?

Washington State Medicaid has applied for $3 billion in funds that would cover three areas of transformation in Medicaid, including one area devoted to Supportive Housing and Supportive Employment services.

'Under The Bridge' to help Spokane homeless

This is a piece trying to highlight the work connecting homeless populations with the traditional health care system.  It’s based in Spokane, which we thought might elevate this a bit to a statewide level.

An interview with one of the state’s leading policy thinkers about housing and homelessness about the state of housing policy at the state level.

An interview with one of the primary architect’s of Medicaid’s proposed integration of supportive housing services into the state health care system.