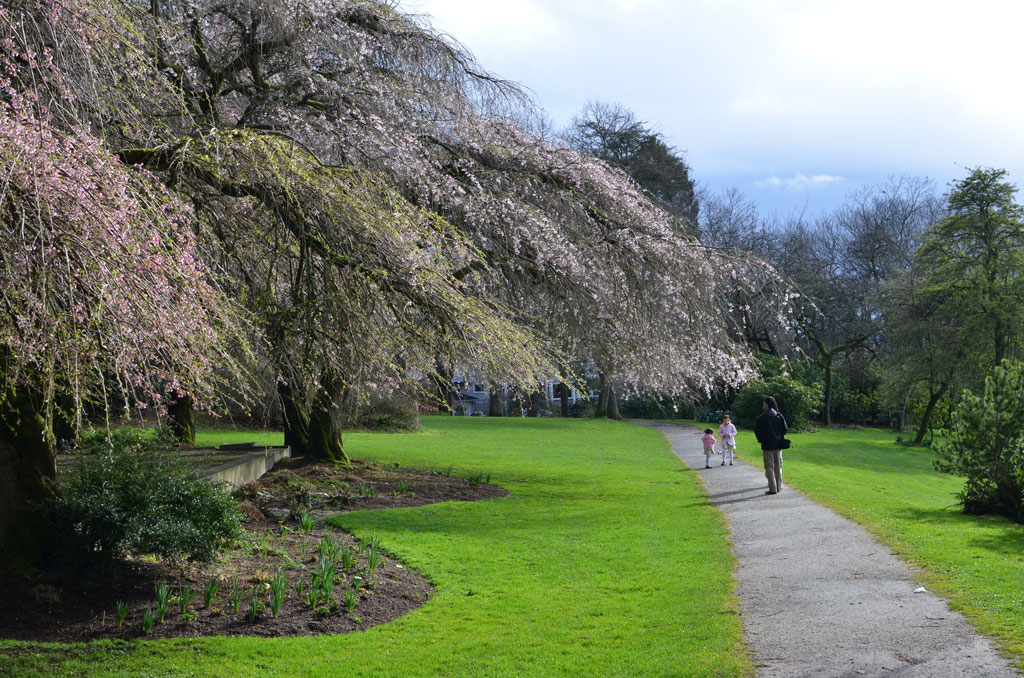 Volunteer Park, part of the Olmsted plan for Seattle.

I admit that my expectations might be way off. I grew up in Seattle in a part of town you might call The People’s Republic of Olmstedia.

The Olmsted Brothers firm shaped modern Seattle into the livable city we know, the city we fear losing bit by bit. Their innovative landscape designs and parks vision are part of our foundational infrastructure. But has it runs its course?

There are certainly indications that the city’s interest in maintaining that vision is at risk.

My childhood home and my father’s childhood home were located along Mount Baker Boulevard as it snakes from McClellan to Rainier Avenue. It features a chain of open boulevard parks; when I was young, it even featured a few ornamental rose gardens. You could play under broadleaf trees, yet have enough open space for neighborhood football or tag. Within walking distance is Lake Washington Boulevard, Colman Park, and the long shoreline boulevard that runs from Seward Park in the south to Montlake in the north.

In many cases these parks are better today than they were half a century ago, improved with more exciting playgrounds, native plants have been restored, trees and foliage that have matured. A pond in Mount Baker Park once was a fetid, mud and slime-choked mess. Now it runs clear. There are even goldfish there, not native, but pretty.

The neat thing in my youth was that you didn’t have to be rich to have access to these treasures. They were designed by the Olmsteds as part of Seattle’s attempt to create an amazing park and boulevard system for a burgeoning urban population. And it worked. In the depths of the Boeing recession in the late 1960s and early ’70s, whites fled to the suburbs, and pockets of poverty in the Rainier Valley were persistent, even the humblest Seattleite had free and easy access to these green spaces. I took that for granted: Surely, everyone in Seattle had parks like these. It wasn’t true, but it was more true here than in many other cities.

Walking recently in Mount Baker and Colman parks, I was struck by how durable and beautiful this legacy is, and the quality of the original craftsmanship. The park designers argued to preserve old growth and limit cars. They built park restrooms to look like sturdy English cottages. Now, in some parks you’re lucky to get a Honey Bucket.

In Colman Park next to the Mount Baker bathing beach, the Parks Department has a sign that quotes Frederick Law Olmsted, the patriarch of the design firm that shaped our city. His philosophy was to create “ground to which people may easily go after their day’s work is done, and where they may stroll for an hour seeing, hearing and feeling nothing of the bustle and jar of the streets.” The commitment to this vision is one of the things that has made Seattle special, and we still love our parks. We have vast volunteer networks, green space restorers, millionaire donors and foundations to help take care and enhance them. But can we remain committed to extending these great benefits to the larger population in the denser, bigger city we’re building?

I worry about whether we’ll continue to create parks that share these commitments. InvestigateWest did a story recently about the city potentially slipping away from its commitment to expanding parks — real parks — in the new draft of the Comprehensive Plan.

There’s a commitment in the plan to “open space” in a rapidly growing city with real-estate values skyrocketing, but this increasingly means painted intersections — “pavement parks,” or “parklets” that turn curbside parking spaces into pedestrian oases. These painted streets and jerry-rigged curb spaces, where chairs and tables are placed to form little plazas, are a great idea. But they are no more parks than are traffic circles, and certainly they don’t meet the original Olmsted standards.

Will Seattle dial back its park ambitions due to growth pressures, and decide mostly to make do? Old-school parks are deemed too expensive — unless it’s the proposed new waterfront extravaganza, billed as a “park for all” but actually a corridor that will serve transportation, downtown residents and tourists. Fine, but not enough.

The city had to bite the bullet and acquire property during previous building booms — and in this unprecedented one, the space won’t come cheap. But that isn’t stopping us from pushing for major investments in the tens of billions for light rail and more public housing. At the same time, the city is considering selling off a major parcel of potential park property in Southwest Seattle. Surely opportunities like this are rarer than the chance to build affordable housing throughout the city. Parks in underserved areas are essential.

We could also do better by redeveloping many of the waterfront street ends and improving access to them — many are mini-parks waiting to happen. A plaza atop the U-District light rail station was proposed and rejected, but that is the kind of opportunity that should not be missed in neighborhoods that will be dramatically transformed in the years ahead.

We should consider repurposing some of our older parks. Back at the beginning of the 20th century, public land atop Beacon Hill was in play — one plan was to build a cemetery there. The citizens of South Seattle pleaded with the city to build a park, saying that their end of town was being chronically shortchanged compared with the north (some things never change). The city cleared the land and built Jefferson Park with prison labor. But what did they build? A golf course! The elite users won out over the people. Such things happen — for a while, the land that is now the Arboretum was claimed by wealthy folks who wanted it reserved for harness racing and an equestrian center. Fortunately, that failed and it was transformed into what we have today, and which is currently being improved with new trails. If the city cannot find new Jefferson Park-like parcels, could we consider remaking the park for wider use?

There are also park-like repurposing opportunities at Seattle Center. The Center did not grow out of the Olmsted ideal — it was a love child between Disneyland, Rockefeller Center, Century 21 and Copenhagen’s Tivoli Gardens. And while it must remain multi-purpose, green space could be dramatically expanded if the city could acquire Memorial Stadium from the Seattle School District. That site offers a tremendous opportunity, especially in light of the failure of voters to back South Lake Union’s Commons project.

Another concern is the values of Seattleites themselves. We’ve been known as tree-huggers, but too many people now are tree-butchers. This spring’s debacle of clear-cutting a public hillside in West Seattle is the poster-child of the phenomenon. Yes, our pioneers cut trees, but over the course of the 20th century, we became a city that saw the value of green canopy, beautification, hillside stabilization, wetland preservation, salmon and native species restoration, and habitat for critters. The ethic of green preservation is widespread in Seattle, but there are too many people who think too selfishly. We need tougher penalties and enforcement. Maybe we need Olmsted re-education camps!

The sense of shared commitment needs to be reinforced. Despite growth, cheap and quick is not the only answer. Parks citywide should be created, some reinvented and improved. We need to build with an ethic of permanence and expansion. Seattle’s open space cannot be protected and parks cannot be created by buckets of paint and folding chairs alone.