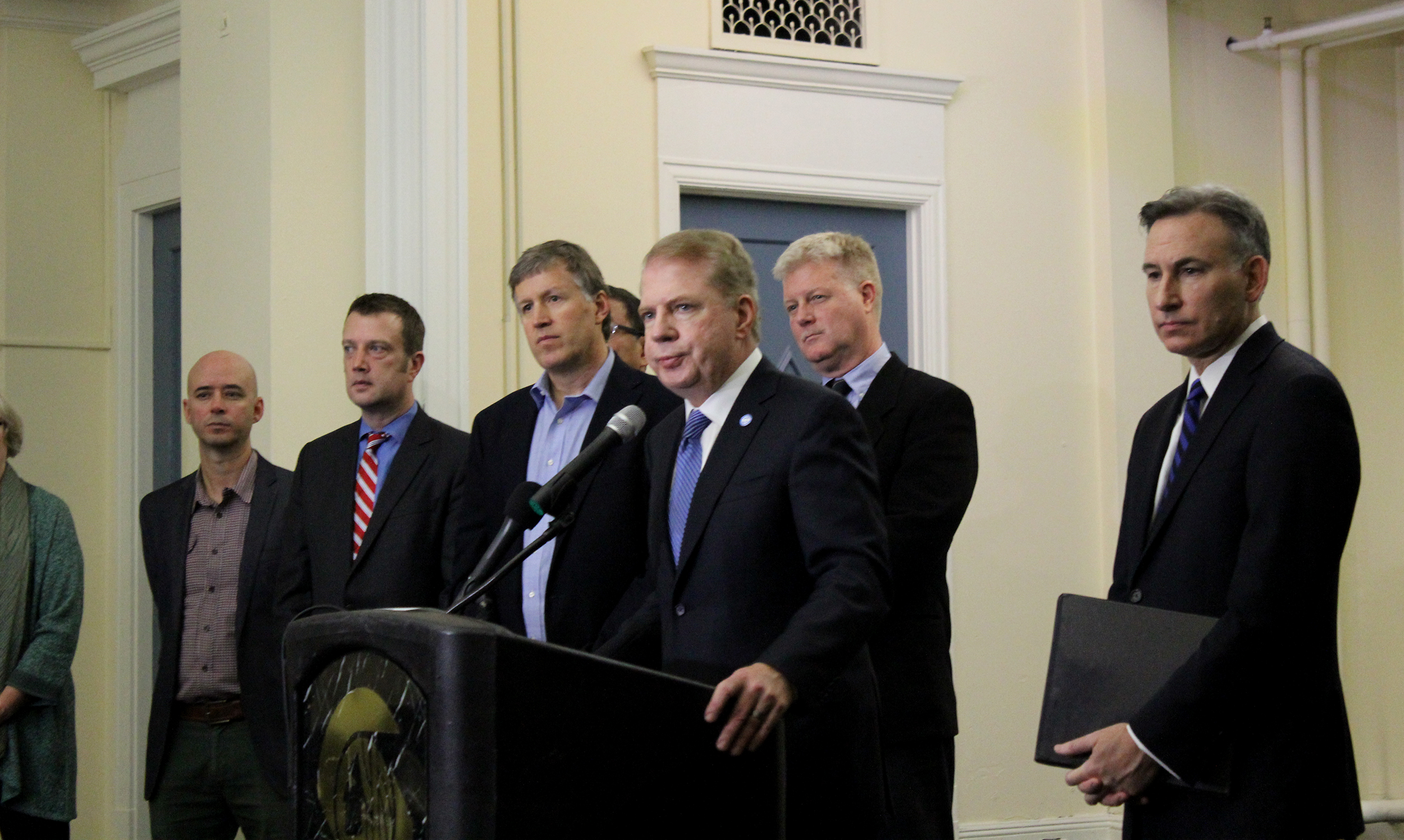 Last November 2, citing the thousands of people sleeping in the streets, Seattle Mayor Ed Murray and King County Executive Dow Constantine declared a state of emergency around the issue of homelessness. Forty-five homeless people died in 2015, said Murray, an emergency if he’s ever seen one. The move afforded the mayor sweeping executive powers and occasion to free up millions of dollars to combat the problem.

More than seven months later, there is still panic on the faces of elected officials.

There’s Councilmember Bruce Harrell at a community meeting in the International District, shouting in response to calls to clean up the homeless on King Street, beneath I-5: “What the heck are we supposed to do with these people? Are we supposed to arrest them?”

There’s Murray in a press conference earlier this month, admitting that his approach to the area, variously called the East Duwamish Greenbelt or the Jungle, is far from scientific: “We’re making this up as we go along.”

Make no mistake, there are the customary expressions of optimism, but the panic creeps in.

In Seattle these days, homelessness seeps into every conversation about public safety, housing, drug use. Even a meeting in the International District last week, called to update the public on the investigation into the murder of community activist Donnie Chin, ended with Chief of Police Kathleen O’Toole and other elected officials being escorted through the neighborhood on a gallery walk of poverty, drug use and homelessness.

As the state of emergency rolls on, with no end in sight, it’s enough to make you wonder what progress we’ve made, and where this is all leading. Since Murray and Constantine put the state of emergency in place, they’ve spent millions in city, state and federal dollars. But to most Seattleites, the problem appears to be as bad as ever.

The decision to declare a state of emergency was in coordination with cities along the west coast and in Hawaii, all of which have seen homelessness become epidemic in recent decades. In January, volunteers counted over 4,500 people living on the streets in King County, nearly 3,000 of which were in Seattle.

The justification for the declaration was that more people had died in the streets of Seattle than in any recent natural disaster. Murray pulled $5.3 million from the general fund, promising to pay it back by selling land in South Seattle. The City Council added another $2 million on top of that, bringing the total expenditure to $7.3 million.

But the declaration also sent the city into uncharted territory. When states of emergency were declared after the 2001 Nisqually earthquake and the 1999 WTO protests, they addressed acute needs with clear goals and end dates. Homelessness has proven to be more complex.

So far, just over $6 million of the emergency funding has been committed. The city has added 377 new beds to local shelters and done nearly 500 outreach visits to homeless encampments. “We’re seeing more people being served because of these dollars that weren’t being served before,” says project manager in Seattle’s Human Services Department Emily Nolan.

But the city’s outreach efforts have run up against some harsh realities. To start, data collection on outreach is a challenge, a point HSD concedes. Therefore, measuring impact is also a challenge.

Between January 1 and June 17, more than 1,000 people have been contacted through outreach visits, but fewer than 100 accepted referrals to shelters or sanctioned homeless encampments — and of those, outreach workers didn’t necessarily walk them to the door.

Of the people approached, 461 were ineligible for shelter, including 93 because of substance use and 79 for issues related to mental health. Others cited having too many belongings or because they lived with family or pets. (Most shelters segregate people by sex, and few allow animals.)

772 declined the offer of shelter because they’d had negative experiences with the shelter system, because they preferred to stick with friends or family, or because of privacy concerns. It’s unclear in the city’s data how much of an overlap there was between people who were both ineligible and declined.

“It’s cleaner out here,” explains Abdul Toumbo, a homeless veteran sitting on a cooler near 8th and King near the tent where he has lived for roughly a year. “There aren’t any bed bugs.

“I can’t be around a lot of people, especially a lot of people that have mental issues too,” Toumbo, adds, admitting that he has struggled with drug addiction. “I just can’t deal with the bickering and the stealing.”

Toumbo has connected with REACH, an outreach and case management service that has received more support from the city under the state of emergency. He says he’s been seeing more teams lately and they’re working with him to find permanent housing.

But in a larger sense, Toumbo demonstrates the city’s need to address the underlying causes of homelessness, especially drug rehab, including his own — and how those needs will remain unaddressed by the city's emergency efforts; While HSD does fund systemic work out of its normal operating budget, the emergency funding is largely dedicated for acute needs.

From the beginning, Murray has said the city can’t solve these problems alone. He hoped the state of emergency would get the federal and state governments to step up support for housing, mental health and drug rehab programs.

President Obama has promised to add to his next budget $1 billion for the opioid epidemic and $5.5 billion in homeless assistance. The state legislature increased funding last session, although far less than many had hoped. It’s progress, but there are still enormous gaps.

And there is more that Murray could do, if he so chose. By declaring a state of emergency, the mayor takes the reins of the police department. He won’t, but he could theoretically call curfews, close businesses, shut off utilities and, if he wanted, ban the sale and possession of firearms in the city.

Murray has used the tool to establish sanctioned homeless encampments and a parking lot for people who live in their cars, both of which normally require more vetting through the city’s land use and zoning channels. But that’s about it.

“I wish he was using more of the order,” says former city councilmember Nick Licata. As an example, he points to the mayor’s recent move to establish a 24-hour, one-stop shop for the homeless — a replica of San Francisco’s Navigation Center. The mayor will issue a request for proposal (RFP), which is required under normal circumstances to give contractors an equal shot at getting the contract.

Licata says skip it. “The RFP process is a long process,” he says. “Quite honestly — bring one or two people up from San Francisco … and get something up and running within two months.” The emergency order, he says, would protect the city in court if contractors sued.

"The RFP process ensures that the City receives multiple proposals to choose from," a spokesperson from the Mayor's Office said in an email, "allowing policy-makers to make a decision that best fits the need of the project or service sought. To hypothetically circumvent that process would essentially mean the City would be on its own in developing projects, which is not efficient nor cost effective."

Licata acknowledges that the speed would make some people angry who would say the process isn’t being respected. But, he adds, that’s the risk of assuming executive authority. “That’s why it’s an emergency. You curtail those rights.”

It all begs the question: If Murray is not making more use of his executive powers, what’s the point of being under a state of emergency?

The declaration was designed to infuse money into the fight, and to jump-start a citywide conversation. And to a certain extent, it has done those things. “Before, no one would ask us about work,” says Jason Johnson, Deputy Director of HSD. “Now we can no longer attend events without talking about our work.”

But there is a disconnect between the drama of a state of emergency, which conjures images of FEMA and the National Guard, and the tents that still line King street or I-5 or the King County administration building. Already this year, 25 homeless people have died in King County, according to the Homelessness Remembrance Project, a network of homeless people. That's more than all the homicides Seattle sees in a year.

All this puts Murray and the city council in an awkward position. The mayor is using his executive powers only sparingly, but at the same time, ending the state of emergency would imply that the emergency has ended. Clearly, it hasn’t.