The surprisingly complex business of putting heaven on the half shell 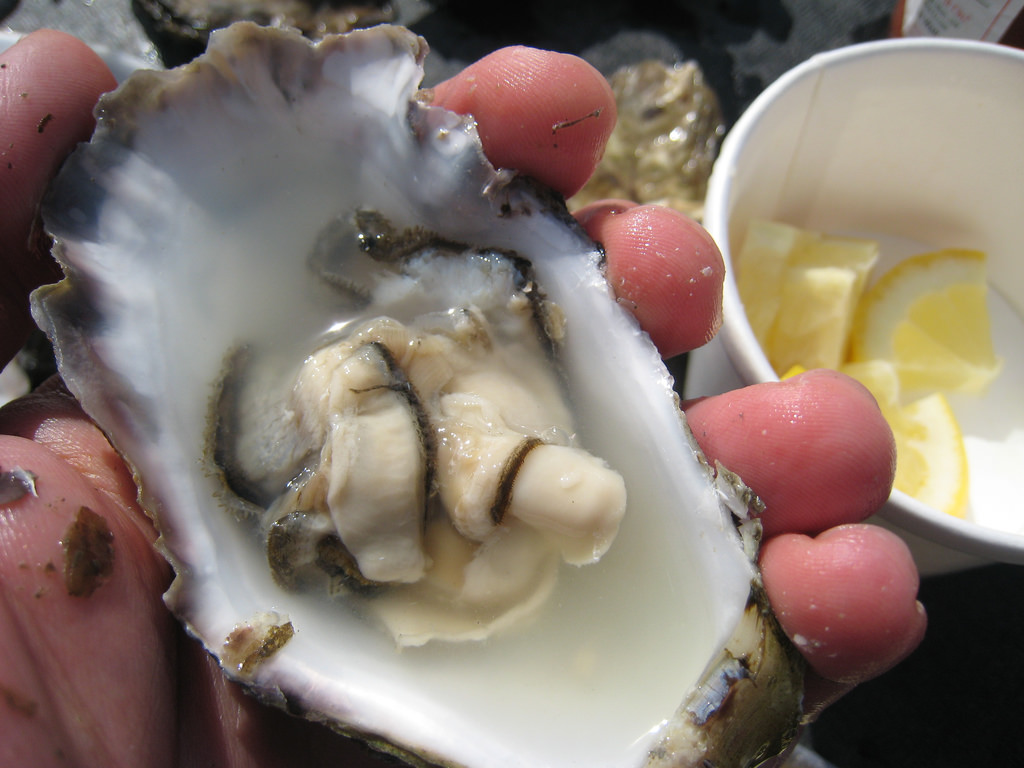 This is the second in a series of stories about Washington’s oyster industry. Read part 1 here.

Glucking down the muddy shore of Steamboat Island on a perfect spring day, I watch my feet with every stride. Hundreds of ragged, buff-colored shells lie before me, and I don’t want to step on them. I’d prefer that the morsel of meat contained within each one of them end up in my mouth, not squashed against the bottom my rubber boot.

“Do you want to try one?” asks Saleh Prohim, who manages this 25-acre parcel of tideland for Taylor Shellfish. The answer, of course, is yes. Prohim picks up an oyster, expertly pries it open with a knife, scrapes the slimy creature inside free of the shell, and hands it to me. I tip the still-live animal onto my tongue, and with it, the taste of South Puget Sound’s Totten Inlet.

My morning snack was just one of the about 400,000 Pacific oysters Taylor Shellfish will produce from this particular parcel each year. And that’s just a fraction of the total output the company reaps from the sum of its approximately 11,000 acres of Washington tideland. Taylor, headquartered in Shelton, Washington, is one of the oldest oyster operations in the state, and one of the largest producers of shellfish in the country. It’s in large part thanks to companies like Taylor that Washingtonians feel such pride and hunger for our locally produced oysters. 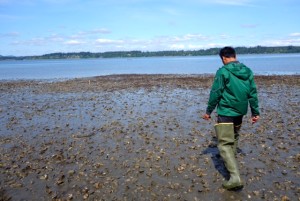 But as much as we celebrate these toothsome bivalves, most people’s impression of the industry that supplies Puget Sound shellfish is hazy at best. In my last piece, I provided a quick history of the business, and explained that the main oyster species we grow here now, the Japanese Pacific, is an entirely different animal from the one that flourished in our waters 100 years ago. Now let’s take a look at how it’s actually done.

The most complicated part of rearing oysters in Puget Sound today comes early on in the process: producing the free-swimming larvae, so small they are invisible to the naked eye. The main problem? If you haven’t noticed, the water around here is cold. Pacific oysters, native to the warmer waters off of Japan, generally spawn only when the water temperature is at least 68 degrees Fahrenheit, a far cry from our usual summer peaks of about 53 degrees.

From the late 1920s to the early 1970s, Washington growers got around this by importing oyster seed from Japan every year. Today, Taylor produces some seed at a hatchery in Hawaii (the fact that some oyster growers opened additional hatcheries in Hawaii because of seed shortages thought to be caused by ocean acidification created a lot of buzz in 2014, but Taylor opened its first hatchery there more than 20 years ago simply because the water is warmer). But most Washington oysters are now spawned and reared in carefully controlled hatcheries closer to home, which look like high-tech biology labs stocked with monitoring equipment, Erlenmeyer flasks, and tubs of algae (a.k.a oyster food).

There are now three hatcheries based in Washington, one of which is owned by Taylor Shellfish and produces seed sown by shellfish farmers all over the world. Selling oyster larvae to other companies in Washington and around the world is now a sizable part of the company’s business, says Bill Dewey, Taylor's director of public affairs. 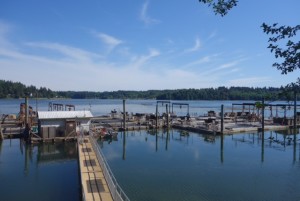 Once the larva has grown into a speck-size oyster, the next stop is Taylor’s nursery, or FLUPSY (floating upweller system), a floating platform in Totten Inlet with rows of tanks full of oysters of various sizes. Here, safe from predators, the oysters are given a chance to acclimate to local conditions. About three months later, the oysters are about the size of a quarter and ready for planting.

This, finally, is the stage in which Puget Sound’s inherent conditions really suit the Pacific oyster. Because the water in South Puget Sound’s bays and inlets is very clean and packed with nutrients, the bivalves thrive here once they've been planted.

“By some standards, an oyster leads a dream life,” write David G. Gordon, Nancy E. Blanton and Terry Y. Nosho’s in their book, “Heaven on the Half Shell.” “It doesn’t have to hunt for food, but simply waits for the tide to bring its next serving … snug in a subtidal channel or secure on a soggy mudflat, an oyster can feed at its leisure, filtering up to eight gallons of food-rich salt water per hour.”

The oysters are left alone to grow for a year and a half to three years. Then the crop is carried off to one of Taylor Shellfish’s processing plants, a well-oiled convergence of manual and machine labor. In a large, refrigerated warehouse in which the chilly air carries wafts of the briny scent of the ocean, there are baskets and baskets full of oysters — labeled with when and where they were harvested — that sit waiting to be cleaned, sorted, and then dumped onto a conveyer belt, on which they will reach the hands of about a dozen workers armed with oyster knives ready to shuck them. 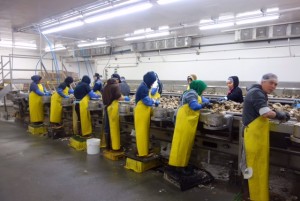 Workers collect the meat in baskets, then seal it in jars, which will be packaged up and shipped everywhere from Brooklyn to Hong Kong. (The oysters to be sold on the half shell get processed in a separate building next door.) The empty shells land on another conveyor belt, later to be sorted into neat stacks outside. Eventually, the shells will become the substrate for the future oyster larvae reared in Taylor’s hatcheries and FLUPSY: the beginnings of another shucker’s dozen.

We may think of oysters as a simple, local, traditional food, but growing them in Washington is a fairly complicated, global endeavor that took shellfish farmers decades to develop. And if we want to keep growing them here, that process will have to continue to evolve. I'll talk more about that, and the threats that loom ahead for the oyster industry, in part 3.