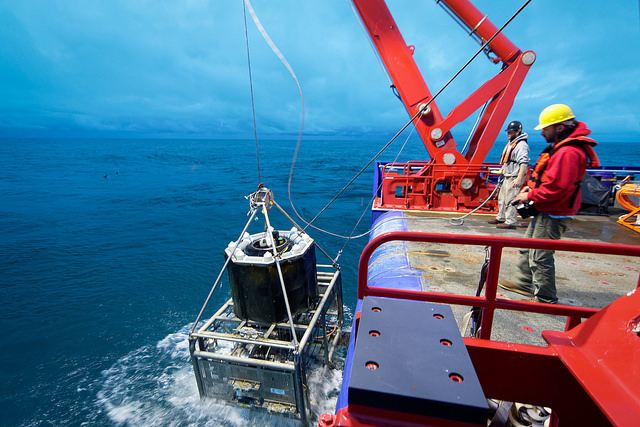 When The Big One is on its way, people in British Columbia may be the first to know.

In June, Ocean Networks Canada (ONC) started creating a system of seabed sensors west of Vancouver Island. The cables will transmit signals from sensors at the edge of the Cascadia fault, where the Juan de Fuca tectonic plate slips eastward under the North American plate.

Moran says she regrets that quote. It sounds so boastful, which isn't her style. And yet . . . she's certainly pleased with what the new system should be able to do.

The idea, Moran says, is that "getting the sensors closer to the location of the earthquake [than the land-based sensors being deployed in the U.S. and elsewhere] will provide more time.”

The basics: The Cascadia fault is the expected source of The Big One, just as it was of the huge quake that hurled a tsunami into Washington's coast in 1700. Like the Alaska quake that devastated Anchorage in 1964, the event of 1700 was a subduction quake, caused by tectonic plate pushing under each other. The Cascadia subduction zone parallels the coasts of B.C. Washington, Oregon and northern California.

The University of Washington-based Pacific Seismic Network last year began testing a warning system with businesses, transportation agencies, utilities and others. And it won $3.6 million in grant support earlier this year for developing apps to send warnings to cellphones, something envisioned to be in use within a few years.

The ONC system will provide more warning time if there's a subduction quake. If there's a quake that doesn't start along a subduction zone, like the quake that devastated Christchurch, New Zealand in 2011 — or the 2001 Nisqually Quake that knocked bricks and stonework off old buildings in Seattle, it won't give anyone an edge.

An earthquake produces two kinds of waves. The second, the S wave, does the damage. The first, the P wave, travels faster through the earth. Therefore, if you can detect the P wave, you will have a little advance warning before the S wave hits. Earthquake warning systems are all on the alert for P waves.

Ocean Networks Canada — a non-profit created by and still affiliated with the University of Victoria — already runs a system of undersea sensors off the coast of Vancouver Island. Its roughly 500-mile NEPTUNE and 30-mile VENUS networks transmit data about all sorts of ocean conditions such as temperature, salinity and sediment content used by scientists, companies, the Canadian military and others.

Signals from the continental shelf, a mid-ocean ridge and points in between are transmitted to a shore station at Port Alberni, from which fiber optic cable takes them to Victoria. ONC has gotten good at this; as Moran explains, "we have been operating cable observatories for 10 years."

If there is a subduction quake, the new system should be resilient enough to keep the data flowing, no matter what. Signals can travel either way through the underwater cable loop, Moran explains. If, say, an underwater landslide keeps them from going one way, they can go the other. Once the signals leave the water, via a thick, high-bandwidth cable, they will ultimately be transmitted in a variety of ways and all the data that go to Victoria will also be sent inland to Saskatchewan. Even in a major quake, she says, the internet should be intact.

As Nature noted, Japan is the pioneer in earthquake warnings, issuing public alerts since 2007. Nature noted, “During the magnitude-9 Tohoku earthquake of March 2011 residents of Sendai, the major city nearest to the epicentre, got 15 seconds of warning; Tokyo got more than a minute." Although the system stopped any bullet train derailments during huge 2011 earthquake, scientists are working to make it much faster.

Japan's system is definitely advanced, Moran says, as is the one in Taiwan, but no one has an undersea warning network like the one ONC is building. Why not? "It's hard," Moran says. "Running cable observatories isn't easy."

Needless to say, it is also expensive. Moran explains that ONC was created as a research center with many constituencies and sources of funds, likening it to the collaborative effort required for a major telescope or, say, Europe's 21-nation CERN laboratory for particle physics. It is one of Canada's four major scientific initiatives. Canada has a small population, she says, so "when we tend to invest in something like Ocean Networks Canada, it's multiple-use." It has gotten money from the Canada Foundation for Innovation and from government agencies. It gets other funds from the commercialization of its research. The B.C. government has chipped in $5 million (Canadian) for earthquake warning work. Moran says Canada has spent some $230 million on ONC so far.

What will Canada and British Columbia get for their earthquake warning money? The new system might give people in Vancouver 30 to 90 seconds warning of a quake that struck right offshore. If the quake were centered off Oregon, the lead time might stretch to minutes. Either way, says Moran, there might be enough time for fire stations to get their doors open before building movement jams the doors shut; school kids to get under their desks (or out of the buildings); financial firms to start shutting down computers so data isn't lost; rail transit systems to slow their trains.

If we had a system like that, you might also have extra time to reconsider walking into one of Seattle's many un-retrofitted old buildings likely to pancake in a major quake, crossing any of the state's more than 100 structurally deficient bridges, driving across the old viaduct — or through the new tunnel. If all else failed, you'd probably have enough time to pray.