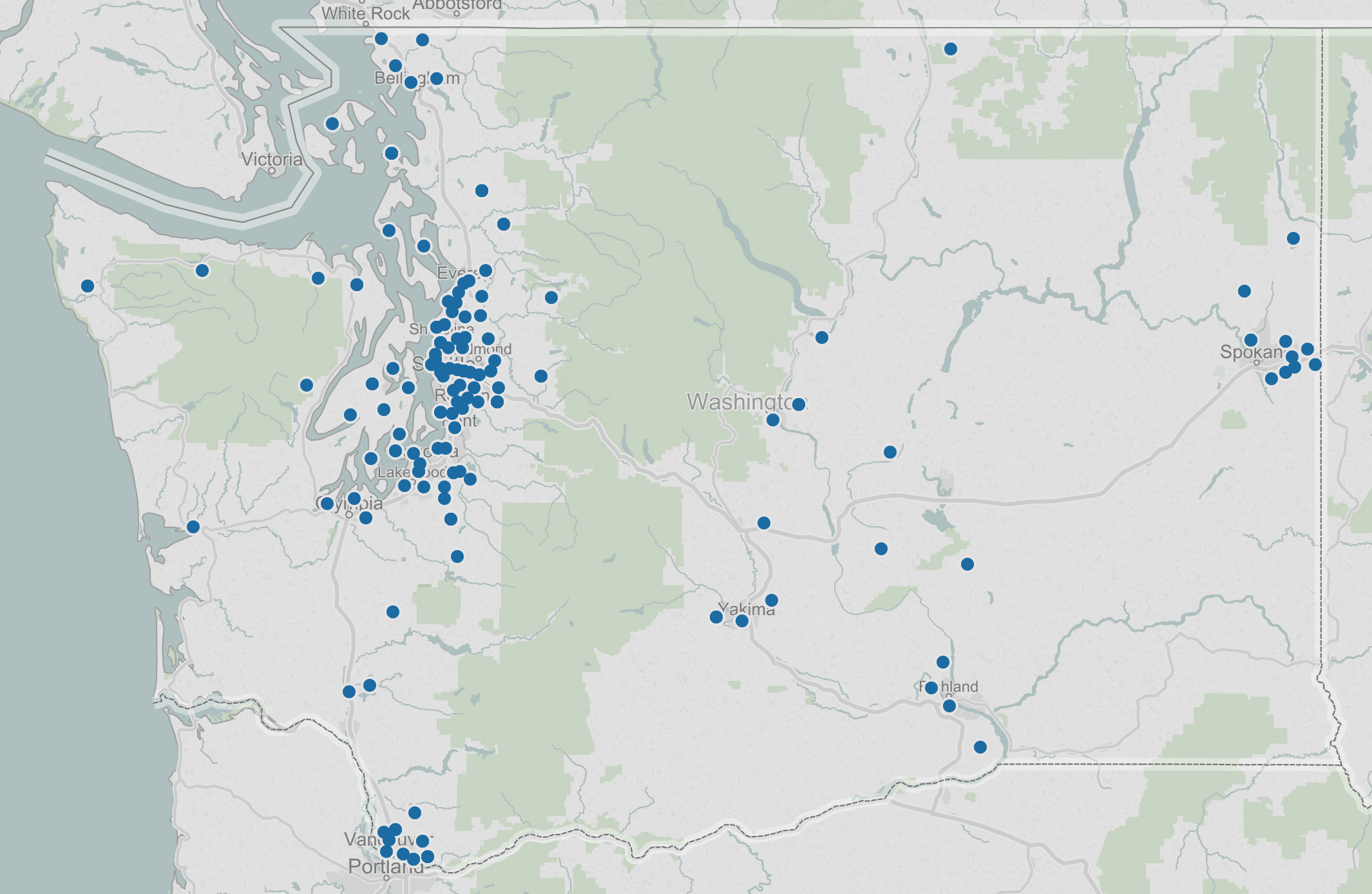 A map of individuals who have donated over $200 to Donald Trump's presidential campaign.

Donald Trump’s biggest financial supporter in Washington is a Tesla-driving, self-proclaimed leftist and feminist from the suburbs bordering Microsoft. And in a poetic turn, his support for Trump is largely part of a scheme to enrich himself, though he prefers the candidate over Hillary Clinton.

Back in March, Seattle Times columnist and renowned soul music DJ Gene Balk made a point to call every Trump donor in Seattle, which numbered six at the time. Since then, Trump’s fundraising in the state has spiked, and he’s now up to 20 supporters in Seattle, and about 180 across the state who have donated at least $200. This is the threshold at which the Federal Election Commission catalogs donor data, so smaller donations are not captured in this figure.

Not one to let a good idea go un-copied, I decided to follow up with donors, now that Trump has secured the Republican presidential nomination. I called Seattle-based supporters, as well as others who had donated at high levels across the state. Where I couldn’t find phone numbers, I sent emails or Twitter direct messages.

Numerous donors got back to me, and the conversations underlined the lack of enthusiasm for Trump among state conservatives. A Seattle man described his donation as an "embarrassing" mistake. Echoing a common campaign refrain, one man in Bellevue — the top location for Trump donations in Washington — described U.S. politics as a “rigged system,” of which Clinton was the epitome.

Nearly all of them asked to remain unnamed, though records of their donations are publicly available.

Only one donor was willing to talk on the record. That’s Randy Treibel, Trump’s top financial supporter in the state at $7,758. He was surprised to hear of his status, and said it makes him fear for his safety.

“Now I have to put all my cars in the garage every night, so people don’t key them,” said Treibel. “I have a $160,000 Tesla, so I have to take precautions. I have a live-in housekeeper, and I tell them to be vigilant. I didn’t know I was the top donor, but if people wanted to be mischievous, I’d be a target I guess.”

Treibel is listed as the founder of a company named Twenty One Twelve, which has no website. A LinkedIn page notes it was founded 20 years ago, is a wholesale company, and “a trusted source for everything movies and comic books as well as related collectibles, professional makeup, supplements, etc.”

He has a side business as well, selling official campaign merchandise on Amazon.com at a mark-up. This is the reason Treibel’s donated so much to Trump, he said — those donations are bulk merchandise purchases.

He did the same thing for Bernie Sanders’ merchandise, and is listed as a donor to that campaign to the tune of almost $20,000. His donations to both Trump and Sanders surpassed federal contribution limits, and he says Trump's campaign has refunded him some money, while Sanders' campaign has not.

“I wouldn’t say I’m hoping Trump wins,” said Treibel. “I’m hoping something bad happens to Hillary, like she gets arrested, and then Bernie steps in and wins.”

Map of supporters in Washington.

Treibel has bought no Clinton merchandise, believing there’s no market for it.

“You know how emotions work,” he said. “People are buying irrationality when they buy campaign stuff, and you’re marketing a feeling. Trump and Bernie get people feeling emotional. Hillary doesn’t. At least not in any good way.”

While Treibel paints himself as aloof from the Trump campaign, his public Twitter profile paints a more complicated picture. He describes himself in it as a “progressive feminist (Anti-SJW),” an acronym for “social justice warriors.” This is a derogatory term for people (mostly on social media) who aggressively attack those they believe to be incorrect on issues of gender and race.

Asked about his thoughts on the 2016 race — and the fact Trump seems pretty far from a feminist candidate — Treibel doesn’t really help his case much.

“I don’t want to sound like a misogynist, because there’s a possibility it (another Clinton presidency) could be good,” he said. “But Hillary is like that girlfriend that treated you like s**t. Getting back with her, you know it’s not going to be great, but you know what you’re getting. With Trump, it’s like getting together with a girl with a bad reputation, but who knows whether they’re going to be good to you.”

Judging by his Twitter feed, Treibel’s most consistent political position is anti-Hillary. His most recent cause has been advocating for right-wing pundit Milo Yiannopoulos, who was booted from Twitter for sending offensive messages to Leslie Jones, the African-American "Ghostbusters" star who's faced a barrage of racist tweets since the release of the movie. Treibel has gone so far as to write "#FreeMilo” in chalk inside a children’s museum.

When it comes to supporting the top of the ticket, many major Republican donors across the U.S. have sat this election out up to this point. An analysis of Federal Election Commissions data shows this is certainly the case in Washington.

So far, Trump has received $468,338 from Washington supporters donating over $200. At this point in 2012, Mitt Romney had attracted $931,419 from this class of donors. Nonetheless, Washington ranks fourteenth in the country for donations to Trump, well ahead of many traditionally conservative states.

The chairman of the state Republican party Susan Hutchison tells me she is not concerned about Trump’s chances in Washington, and suspects that voters who traditionally support Democrats are the key.

“Prepare to be shocked this year,” said Hutchison. “There are a lot of Democrats in this state who support Donald Trump. We’ve got a big independent voter base in this state, and Trump really appeals to the independent vote. In many ways, he attracts soft Democrats, the trade union Democrats with Republican values... When Trump flips the state, people are going to be surprised.”