How much money will it take to make King County arts better? 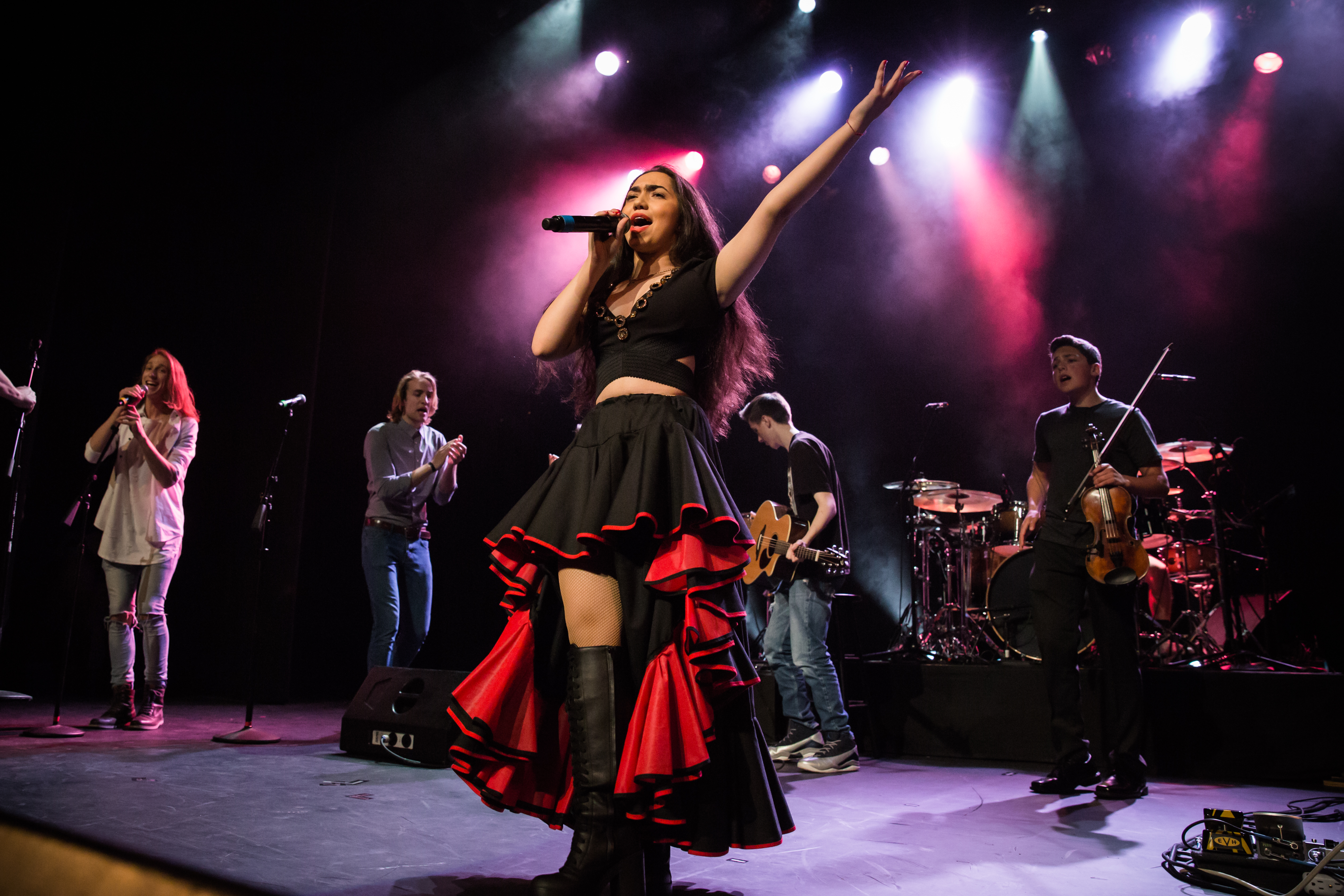 Gloria Plenkina sings during a More Music @ The Moore performance.

Gloria Plenkina, 14, is a student at Chinook Middle School in Bellevue. In her spare time, she’s a Russian gypsy.

Plenkina, who moved with her family to Bellevue from Moscow about four years ago, really got her start performing with More Music @ The Moore, a Seattle Theatre Group program that develops young artists representing diverse music genres.

“The program allowed me to try out many different music styles,” Plenkina says. “I got to try rock, which I never thought I would sing, but now it’s something I’ll incorporate in my gypsy routines.”

Programs like More Music could get a major boost in the coming years, thanks to a new Cultural Access Program.

Ten years in the making, a law signed in July 2015 authorizes any county in Washington state to allow voting on a ballot measure that would provide funding to local cultural, science and heritage organizations.

To do that, taxpayers would have to agree to pony up the money, by way of a one-tenth of 1 percent sales tax increase. A campaign is currently underway to put funding for a King County program on the ballot in the November 2017 election.

It all started with a Cultural Taskforce for Prosperity Partnership, a 2006 coalition of business, labor, government, nonprofit and educational leaders in the Puget Sound region looking at economic development. In its report published in 2012, the task force recommended Washington state authorize local creation of cultural access funds — and from there, Cultural Access Washington (CAWA) was born. Today, over 35 cultural, heritage and science institutions are involved in the group, which worked for passage of the law.

“As Seattle and King County grows, making sure culture, art and heritage groups are broadly available are critical to a healthy community,” says James Kraft, Executive Director of CAWA. “The economic impact of the cultural sector in Seattle is huge.”

A draft report from the Seattle Office of Arts and Culture, the final version of which is due out later this year, points to research that found as an economic sector, arts and culture generates nearly $450 million annually in Seattle.

The draft report found that areas with cultural space have higher Walk Scores, higher rents and, in many cases, are associated with steep increases in property value. This is due, in a large part, to people wanting to live in neighborhoods that are rich in arts and culture.

“When you think about one of the problems at the forefront in public debate now, it’s the growing gap between have and have-nots — it could be housing, jobs, neighborhoods,” Kraft says. “This is a step to make sure what is important to a healthy community is available to everybody.”

The model has been successfully created and sustained using a new sales tax in Denver. The Colorado city's Scientific and Cultural Facilities District (SCFD) was formed in 1988 to revitalize worn-down museums, theaters and education centers in the city, and Peg Long, SCFD Executive Director, says it changed Denver dramatically.

“By providing funding, it has really made cultural tourism an important part of our economy in addition to something that serves locals,” Long says.

According to a 2014 Economic Activity Study by the Colorado Business Committee for the Arts, arts and cultural spending by visitors jumped 14 percent from 2011.

When SCFD started, the district collected and distributed only $13.8 million, and today it distributes about $50 million per year. It will be back on the ballot for a third time in November for reauthorization.

“I think each city has to decide for itself because there are other ways of funding the arts and it’s not one size fits all,” Long says. “It’s not a recipe that you just follow all the ingredients. It’s a recipe that works at sea level, but doesn’t work at altitude and there needs to be some adjustment.”

Looking at how CAWA has structured the money and how 4Culture will distribute, it’s obvious that the organization has taken into account Denver’s experience with the program. A large component for King County’s version is public school access programs, with a big emphasis on equity.

“A good portion of the money will go towards expanding arts and culture in public schools, particularly in schools with a higher percentage of kids receiving subsidized lunches — so in South Seattle, South King County and other areas with gaps,” Kraft says.

The other component of the proposal is sustainable funding for King County’s arts and culture organizations — about 47 large ones and over 300 that are smaller. Right now, most small organization rely on 4Culture as a main funding source. Funded by a combination of King County Lodging Tax, Seattle’s 1-percent-for-art ordinance and grants, 4Culture’s budget is a little over $6 million with only $2.5 million going to arts organizations.

With CAWA, there could be a tenfold increase in the money organizations will get — but there are a few catches.

The legislation has two pools of money: one for those organizations with a budget greater than $1.25 million and another pool that goes beneath that cutoff. This differs from Denver where there are three tiers for funding, with five main organizations getting the bulk of it. In Washington, the large organizations will be competing against one another, and the amount of money will be based off their budget and attendance, with attendance doubly weighted.

“If your organization is really popular with the public, like the science center or aquarium, it will tend to get a bigger percent of that pool of money,” Kraft says.

That’s not all — the amount received can’t make up more than 15 percent of the larger organization’s entire budget and at least 20 percent has to be used for educational access. Guidelines are still being drafted for the second pool under the budget cutoff, but Kraft says there will be more flexibility and no cap on the percentage of funds.

So what if a county declines all this? There are other options. For example, a city within that county can do a cultural access program. D. David Brown, CAWA’s General Manager, points to counties like Spokane County, which is unlikely to pass a tax increase, while the City of Spokane might.

“It’s the same thing with Tacoma and Pierce County and Olympia and Thurston County, and all of these locations are moving forward in making a program happen,” Brown says.

San Juan County and Bainbridge Island are even contemplating the idea.

The measure’s success will hinge, to some degree, one whether the public is finally tired of taxing itself. We now have levies to fund: The 2014 Pre-K measure, 2015’s Move Seattle transportation levy and possibly affordable housing.

This November, the region’s voters will be asked to consider Sound Transit 3 (ST3), a billion-dollar measure to fund the next phase of light rail, among other things. For the typical household, ST3 would equate to $392 per year in new taxes, both property and sales.

“That would definitely throw a monkey wrench into the planning [of CAWA’s ballot measure],” Kraft says.

Even if ST3 did pass, and CAWA did as well, however, the sales tax in the City of Seattle would only go from 9.2 percent to 10.2 percent. CAWA has averaged it out to about $25 a year per person.

“What I anticipate is people thinking ‘oh geeze, another tax’ and you have to make sure they are going to get something that is worth a little money,” Kraft says.

Those benefits would look like more free days at museums and the aquarium, reduced ticket prices and broadened access for kids and families across the city.

Cultural Resource Collective, an ArtsFund program, manages Puget Sound’s larger organizations' databases (think donors, members, ticket sales, volunteers and more). They pooled those databases together and found there are 1.2 million King County households in that database. That’s in a county population of about 2 million.

“People need to understand this is a broad benefit and it’s on par with making sure we have good housing, transportation, a great education system and more,” Kraft says. “Having thriving arts and culture is part of everything you have to have for a healthy community.”

An earlier version of this article incorrectly stated that if ST3 and CAWA were passed, the sales tax in the City of Seattle would go to 9.66 percent. The actual amount would be 10.2 percent. It would also average out to $25 per year, not month.