In this homeless shelter, pets are part of the family 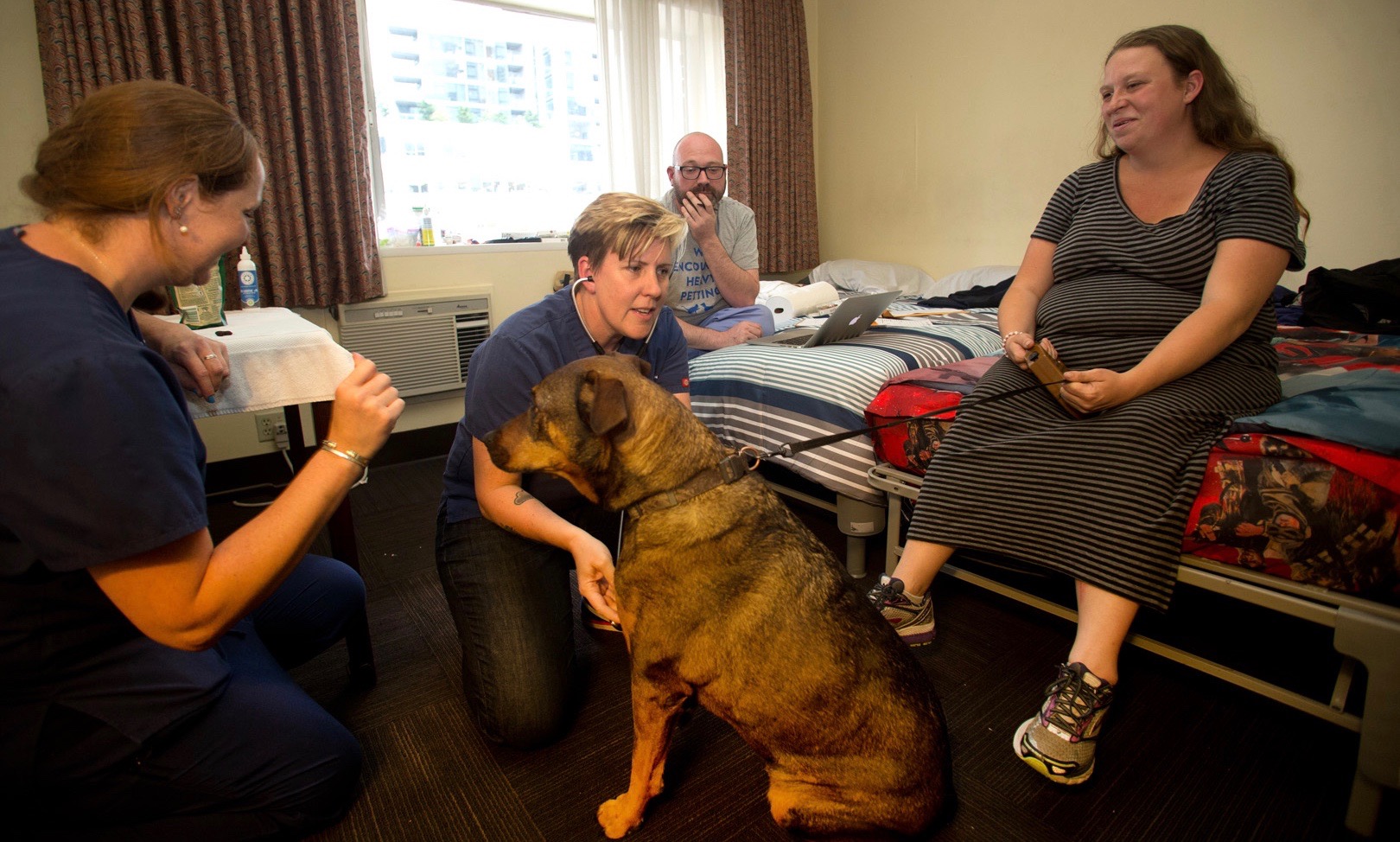 On a quiet afternoon in downtown Seattle, an old, worn-out three-story building bursts with laughter. A tortoise has appeared in the hallway and children bolt out of the dining room, abandoning their dinner to come see it.

The tortoise has just stolen the limelight from Curious George, an 8-week-old kitten who passed from hand to hand, looking more confused than curious. Also forgotten for the moment is Mamma, a 7-year-old Rottweiler-Shepherd mix who loves everybody — so long as you don’t happen to be another dog.

Such are some of the animal residents of Mary’s Place Guest Rooms, a shelter which opened in April at the site of the former Travelodge hotel in South Lake Union. The crisis response shelter, which can house up to 60 families, provides one of the few options for homeless families and their pets to stay together in Seattle.

Eight of the families currently have pets, which bring comfort and joy to their owners and other residents, while providing a bit of entertainment. The Guest Rooms facility won't stay an option for long; the facility is on loan from Amazon until the building is torn down, likely next spring, as the tech giant expands its South Lake Union campus.

Other options for homeless people with pets are in the various tent cities and a men’s shelter downtown. Service animals are allowed to accompany their owners into the city’s shelters, but pets without that designation need to go elsewhere.

“It’s a barrier for families,” said Liz McDaniel, administrative services director of Mary’s Place. “They often don’t want to leave their pets behind. It’s a really challenging choice for families to have to face. So taking away that barrier for families and letting the whole family in together is really important to us.”

The animals at the Guest Rooms receive plenty of support back. Pet supplies, food and free veterinarian check ups at least monthly are included with their residency thanks to donors and service providers.

Dr. Cherri Trusheim, owner of the Urban Animal veterinary care clinic on Capitol Hill, began her monthly service at the Mary's Place facility on June 23. When she heard about the Guest Rooms allowing pets, she thought, “That’s how we could help out!” Along with vet techs Janna O’Connor and Rob Oatman, she checked on two dogs and a cat, providing a free general wellness exam and medical care. Trusheim has plans to open a second office within blocks of the Mary’s Place Guest Rooms.

“There’s a lot of misperceptions out there when it comes to animals and homeless people,” says Don Jordan, director of the Seattle Animal Shelter. More often than not, Jordan says, when animal control officers contact a homeless person with a pet, they are taking care of their animals better than themselves.

"It’s the only comfort they have," Jordan says, "the only reliable thing in their lives.”

McDaniel of Mary’s Place, says, “We know that there are still families sleeping outside but it’s hard to know exactly how many families have pets.” They plan to accept them on an as-needed basis.

Mary’s Place has five emergency night shelter programs and two day centers for families in Seattle. They provide services helping families get out of homelessness including social services, medical care, and legal and financial aid.

At the Guest Rooms, everyone must vacate the former hotel during the day but after 5 p.m. and throughout the night, the place comes alive. Meals are served, children’s play rooms get busy with games and crafts, adults mingle in the hallways. The sense of community is strong here. And when a pet comes through any of the common areas its all eyes and hands toward them to touch, see and connect. The human-animal bond is clear.

For Mary Delp, Mary’s Place has been a saving grace not just for her but for her and her family — her father, Bob Delp; boyfriend J.D.; her 6- and 7-year-old children, Elijah and Krystallynn; dogs Momma and Tinkerbell; and a cat named Midnight. Moving to Seattle from Las Vegas last spring on a belief that they would have temporary housing, they were shocked to learn on arrival it was only for three days. So they spent the next three weeks living out of their van. That’s right, the whole family. Mary is also pregnant with a baby due in August.

“It was rough,” says Mary Delp, who is pregnant. “We were told we’d have help when we got out here and then no help. No nothing. No knowing where to go. No knowing who to talk to. Finding a park at night to sleep and hoping we didn’t get busted.”

If it came down to a choice of whether to give up the pets, Delp says, “I’d rather stay in the van and not have a place." As she explains, “They’re family too.”

One of Delp’s case managers hooked them up with Mary’s Place and it’s been a relief. Delp says she hopes to get into more permanent housing soon — for the whole family.