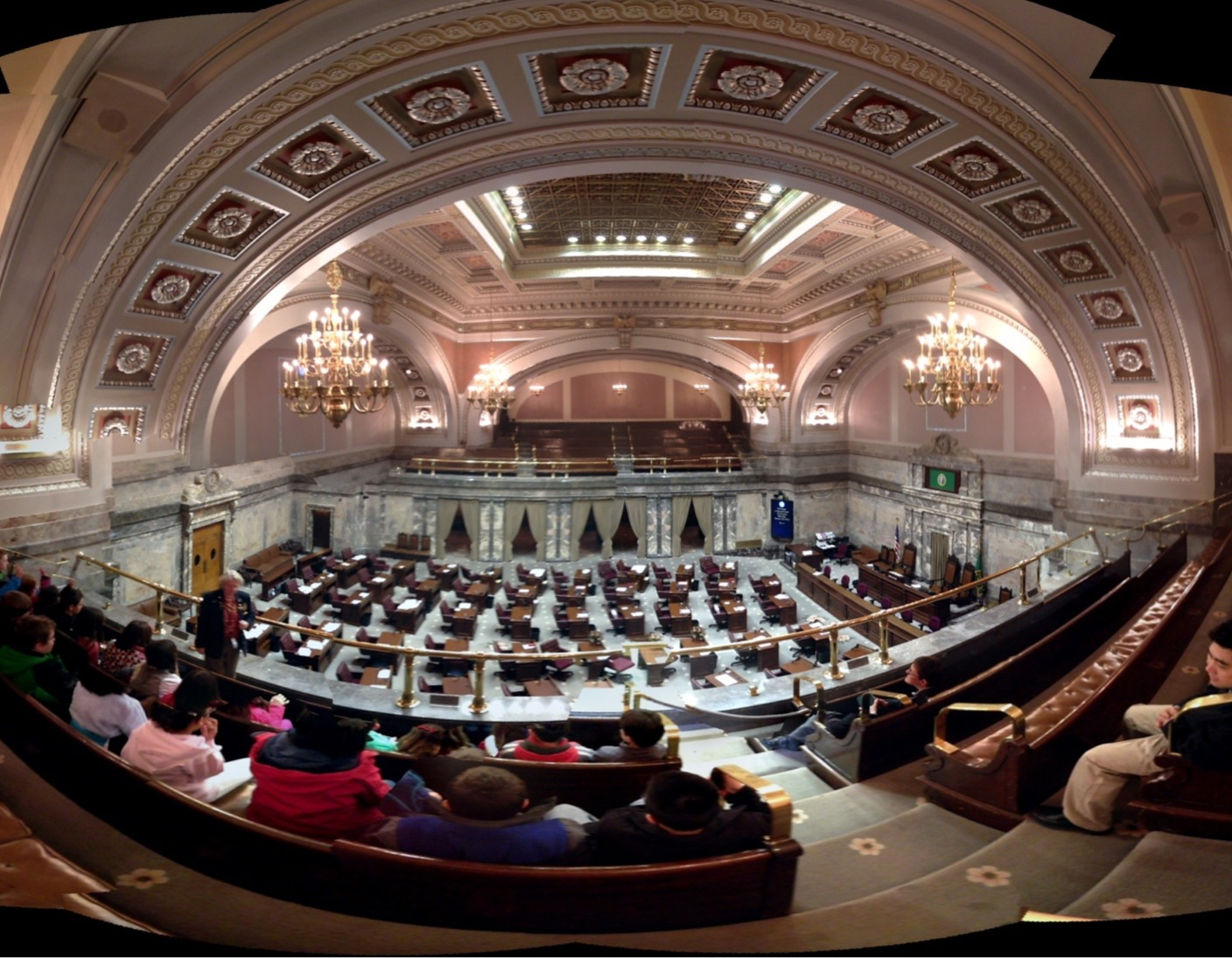 One of the main constitutional duties of the lieutenant governor is to provide over the state Senate.

The realist, the fighter, the outsider, and the really, really experienced one — that’s how you might think about the four top candidates in the race for lieutenant governor, which will be narrowed down to two spots in the Aug. 2 primary.

In state government, where jobs with deep and lasting impact on citizens’ daily lives are cloaked in layers of eye-wateringly boring detail, the office of lieutenant governor is about as boring as they come, short of chief clerk (the lieutenant governor’s assistant). Half the job consists of banging a gavel over and over and — I'm not making this up — saying, “last line.”

Seriously: Along with standing in for the governor when necessary, the main job of the lieutenant governor is presiding over the Senate, where debate starts with every bill being read aloud. Only, bills are quite long, and actually reading them would take ages, so as a matter of course, immediately after the chief clerk starts reading the bill, the lieutenant governor bangs his gavel like a robot and says, “last line,” which cues the clerk to skip to the last line since everyone who cares already knows what it says, anyway.

Sometimes, legislators used the mind-numbingly repetitive ritual to play jokes, like the time Rep. Zack Hudgins, D-Tukwila, arranged for a bill about pro wrestling to include as its last line, “let’s get ready to rumble.” That, in turn, caused those words to be read aloud in a very serious voice by the chief clerk and gave legislative nerds something to laugh about for weeks.

To do this, the current lieutenant governor is paid just over $100,000 a year.

But in the age of Donald Trump, even an astoundingly boring reputation is not enough to shield a job from controversy. Washington’s legislature has gained a reputation of its own in recent years for gridlock, making headlines session after session for failing to finish work on McCleary, the 2012 ruling by the state Supreme Court that the state was failing in its constitutional duty to fund basic education.

In response to that climate, one candidate, state Sen. Cyrus Habib, a two-term legislator from Bellevue, has cracked the debate wide open by saying that he would use the office to block legislation — even an entire budget — if it didn’t go far enough to satisfy the McCleary ruling.

“I will not sign a budget that is unconstitutional, and that means a budget that does not fund McCleary in 2017,” said Habib, speaking to the state’s powerful teachers’ union earlier this year.

The lieutenant governor’s signature is required on all new legislation before it reaches the Governor’s desk. But the signature isn’t a vote for or against any piece of legislation — instead, as the officer charged with presiding over the Senate, whoever holds the office signs the bill as a way of personally certifying it got enough votes to pass and that proper procedure was followed. Habib said that if a senator questioned the constitutionality of a budget’s funding for schools, and if the complaint appeared to have merit, he would withhold his signature.

Of course, with estimates from both sides differing by billions of dollars, what exactly it means to fully fund McCleary is almost as ambiguous as what it means for something to be unconstitutional.

In response to Habib’s statement, the current lieutenant governor, Brad Owen, wrote a letter sternly criticizing Habib, a fellow Democrat, and Habib’s opponents piled on. Owen, who is not seeking re-election, and others said that using the office for political ends risked splitting the already polarized state legislature even further.

In interviews earlier this week, Habib fired back.

Noting that the Legislature has already been widely criticized for partisan gridlock, Habib said it seemed the body was already verging on dysfunctional, so the claims his approach would worsen the situation rang hollow to him.

“It’s hard to argue with a ceremonial vision for the office,” Habib said, adding that the position has long been treated as a “retirement opportunity” for Senate insiders, who spend their four-year terms rubber-stamping whatever comes their way.

Whether the lieutenant governor actually has the power to do more than rubber-stamp bills is an open question. In addition to their signature on bills, whoever holds the office is charged with ruling on objections raised by legislators during debate. All three of Habib’s main opponents say this role is limited to procedural matters, like assuring speakers wait for their turns or stopping bills that are incorrectly formatted. But Habib, who in addition to being a state senator teaches law at Seattle University, insists the law provides opportunities for whoever holds the office to step in if bills are obviously unconstitutional, as well.

Along with Owen's strong criticism, he has faced questions from the other leading candidates, Steve Hobbs,  Phillip Yin and Karen Fraser.

The realist, the fighter, the outsider, and the really (really) experienced person: Habib, who you might for obvious reasons think of as the fighter, has strong competition from three of the other people running for the position.

The realist is Sen. Steve Hobbs, D-Lake Stevens. A major in the Army National Guard with an A rating from the NRA, but also decent rankings from the state's main labor organization, Hobbs often comes across as the definition of a hard-nosed realist. Distancing himself from the idea of using the office to block legislation, Hobbs said in an interview this week that he would focus on being a broker, and getting legislation out that would “give moderate Republicans cover” — basically, win-win legislation that lets them support a Democratic proposal without making them look bad in front more hard-line Republicans. Asked if that meant political horse-trading, something many state politicians — with much clutching of their metaphorical pearls — won’t even admit exists, Hobbs has said he wasn’t opposed to it.

Sen. Karen Fraser, D-Olympia, is also something of a centrist, but stands out for her experience – she’s so experienced, in fact, that you almost feel bad asking her what part of her background prepares her for the position, because it all does. Not only has she been in either the state House or Senate for a total of 27 years, she has spent a good chunk of those years carrying out the lawmaker version of the lieutenant governor’s duties, including serving on or as an adviser to many of the same committees, and leading three trade missions to China (the lieutenant governor chairs a state economic development committee), while also focusing on environmental issues.

Although he’s the main Republican candidate, Phillip Yin is more than anything else the outsider, or promising newcomer, in the race. A former television journalist, when asked what set him apart, Yin said it was the fact that although he had built a familiarity with politics over the years as an observer spent, he had yet to participate firsthand, giving him a unique perspective. “The difference is, I come from more of a third party standpoint,” Yin said.

For the record, Yin also has what may be the best catchphrase in state politics this year — Yin it to win it — which he said, amusedly, has taken on a life of its own. Although he has no elective experience, he has deep roots in the state — a graduate of Eisenhower High in Yakima and the University of Washington — as well as international experience as a journalist and in business.

As the three candidates vie for attention leading up to Aug. 2, one of the defining questions will inevitably be exactly how far down the ticket will ripple the wave of populist discontent that buoyed first Bernie Sanders, then Donald Trump.

If Sanders voters are paying attention, it’s hard to imagine them not lining up behind another candidate who has said, more or less, that he’s ready to start flipping tables if the Legislature doesn’t get serious about McCleary. On the other hand, if those voters gloss over the smaller races - and that’s easy to do - it seems an open question how far Habib’s message will carry him against a set of strong opponents.

This story has been updated since it first appeared to remove a reference to teacher organization rankings of Hobbs. The major teachers groups have endorsed Habib.