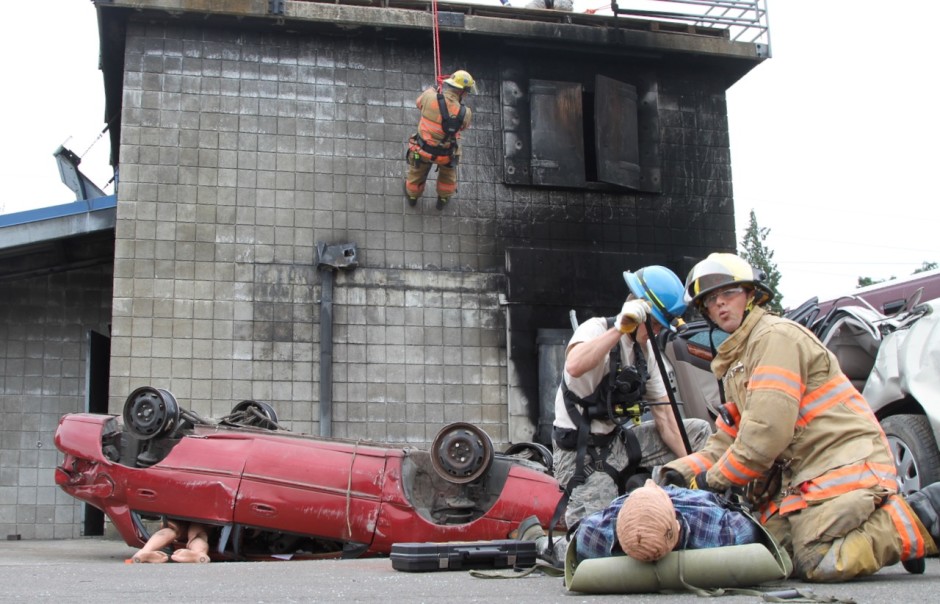 This story originally appeared in OPB/EarthFix.

A Portland firefighter and a national guardsman check for bodies in a pile of crumpled cars at the base of a blackened tower.

They pull a dummy out of one of the cars – one of the few “survivors” of this simulated post-earthquake emergency. They strap the critically injured victim onto a backboard and hook it to a set of dangling ropes.

In the simulation, the first responders had to rappel down from the top of the overpass to get to the pileup. Then, they had to hoist the victims back up to safety.

The scene is designed to mimic one of many emergencies that would follow a major quake.

Across the region, dozens of cities, counties, tribal nations, state and federal agencies mobilized their emergency teams last month to simulate their response to a Cascadia Subduction Zone earthquake. Experts say it’s not a matter of if but when this megaquake will hit, and when it does it could be as big as a magnitude 9.

But even as Portland’s emergency officials are practicing critical emergency response training, they know it’s not going to be enough.

Across town at Portland’s Emergency Coordination Center, the simulated situation is bleak citywide: Bridges are down. Roads are impassable. Hundreds of buildings have collapsed. Fires and mass casualties have been reported throughout the city.

Emergency responders can’t get to many of the worst hit areas. They’re not even sure how many of their people are available to respond.

According Portland Bureau of Emergency Management Director Carmen Merlo, last month’s simulation highlighted numerous challenges the city will face after the big one hits: The city still has 1,600 unreinforced masonry buildings that will injure and even kill people in the earthquake; it’s still struggling with information-sharing across city departments; and it will inevitably be tough to prioritize emergency response with resources stretched thin.

But one of the biggest takeaways, Merlo said, was that it’s unclear how many city employees will be around to help. That means the city is going to need a whole lot more volunteers to back up its first responders.

“Many people who are the most trained responders will likely not be able to get to work,” she said. “One of the things we have to do is train a larger number of people to make sure we have some bench depth. We can’t rely on one cadre of people being available to respond.”

The city has a vision for how everyday people can sub in for first responders when the big one hits.

Officials have hidden dozens of emergency equipment caches all over the city. The caches contain fold-up tents, UHF radios and other essential supplies.

Ernie Jones trains volunteers to set up and operate these neighborhood emergency tents. He said the city is counting on volunteers to check on their neighbors and relay information to emergency officials.

“We know from history 94 to 98 percent of people who are helped saved or rescued after a disaster are helped, saved or rescued by their neighbors not by anybody else – not by firefighters, police or other first responders,” he said. “That’s not because firefighters and police and others don’t want to help. It’s because there’s not enough of them.”

Jones worked for FEMA through 55 disasters across the U.S. He trains volunteers to be ready for a harsh reality.

“When there’s a big earthquake, the firefighters at a given fire station are going to be driving around their fire management area and assessing damage to see where they can be the biggest help to the greatest number of people,” he said. “That may very well mean they’re passing up people on the street who are waving them down for help.”

Merlo says the city’s neighborhood volunteer program got a boost from the Pulitzer-prize-winning article “The Really Big One” that ran in the New Yorker last year.

“The interest has grown exponentially. We now have over 1,400-person wait list for these classes,” she said.

The city now has about a thousand active volunteers, she said, but it needs 10 times that amount to prepare the city’s neighborhoods for the mayhem to come.