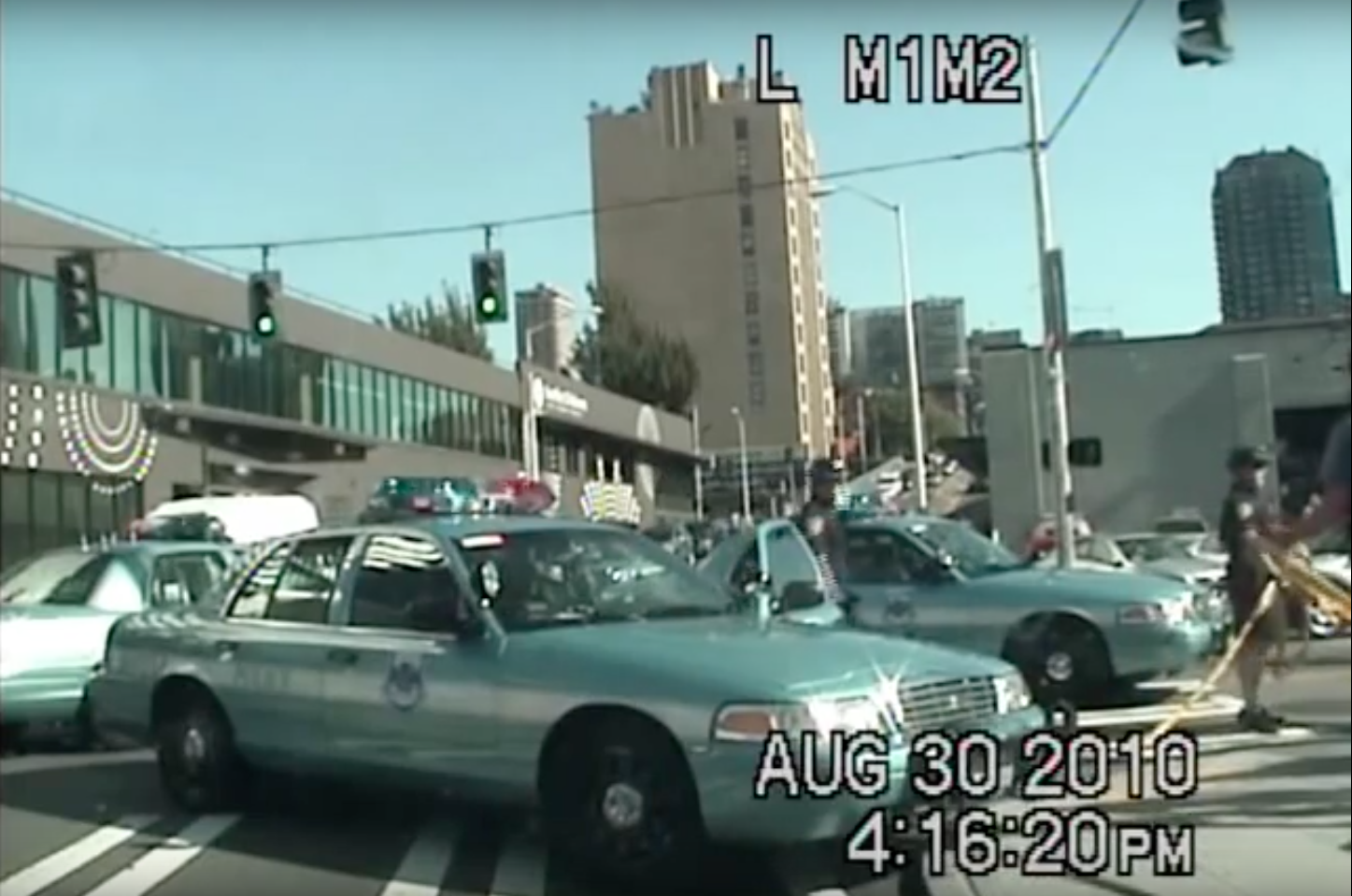 More than two years after the Seattle Police Department learned that its in-car video cameras were frequently dropping frames, at times leaving gaps of more than an hour in video records, the problem remains. Although several media outlets reported in April 2014 that SPD had addressed the problem, internal data reveals that there have been nearly 30,000 incidents of dropped frames since the supposed fix, an average of 35 times a day across the city.

While the problem is present across the police department, of the 20 officers who had the most dropped frames, 12 were out of the South Precinct. Seven of those were on the so-called “Ocean” beat along Beacon Hill. One officer, who on multiple occasions lost close to an hour of video footage, had recently been the subject of a dismissed lawsuit for tightening handcuffs too tightly.

Seattle Police Department Director of Transparency and Privacy Mary Perry points out that the number of incidents per day are down by about a third since the department first learned of the problem. “This is not something that’s a binary situation,” she says, painting the solution as a thing done over time rather than overnight.

Regardless, the problem raises questions about the role of video in policing and, more importantly, about who’s looking over the shoulder of a police department in the midst of transition. These questions are made even more relevant by Mayor Ed Murray’s recent decision to not reappoint anyone to the two civilian watchdog positions inside the department, waiting, he’s said, for clarity on oversight moving forward.

While police body cameras continue to be a topic of fierce debate, in-car video cameras have been mounted on the dashboards of police vehicles in Seattle for years. The grainy footage, with the radio crackling in the background, has been a tool in courts as well as a conduit for greater scrutiny of police officers’ behavior. Its use and reliability has also been a major point of emphasis for the monitor overseeing federally mandated reforms.

Its power has been obvious in recent years. In footage from 2010, Native American woodcarver John T. Williams can be seen crossing in front of a dash cam with a carving knife. Sixteen seconds later officer Ian Birke fires his gun into Williams’ back, killing the man and spurring the Department of Justice’s investigation into SPD. The settlement agreement between the city and the Justice department continues today.

More recently, a seven-second in-car video clip captured the shooting death of Che Taylor last February, called at once justified by the SPD and a set up by the NAACP.

Although less than 1 percent of footage is effected by dropped frames, the average time lost is 16.2 seconds — enough to black out hugely important clips.

When the department learned of the in-car video issues in 2014, the City Attorney’s Office took them seriously enough to notify defense lawyers and present them with the opportunity to challenge court cases. In the end, no cases hinged on anything lost in the videos.

SPD said in a statement at the time that it was working with the cameras’ manufacturer, COBAN, and had installed a software update to fix the issue. The department also hired an outside video forensics analyst to study the extent of the issue.

Meanwhile, people inside the department told local media the problem had been fixed. Head of the City Auditor’s Office, David Jones, said in an email last week, “We heard from SPD that new software had fixed the frame dropping problem, but we didn’t look into it.”

But Perry’s definition of “fixed” is different than the layman might interpret it. “That’s like saying your computer’s been fixed,” she says, when in reality there’s always going to be another bug. She says there are IT people inside the department working on resolving the issue with the outside forensics firm. But because the computer system is old, it’s likely that it will never be resolved completely. “I hate to say we’re doing the best we can,” she says, “but that’s what we’re doing.”

Perry points out that the city documents its progress on data.seattle.gov. “When we can’t get to zero, then the best thing we can do is inform.”

In some ways, the SPD is under immense scrutiny because of its settlement agreement with the DOJ. A city appointed monitor releases lengthy reports on the department’s progress. But his examinations are focused on achieving the specific goals of the settlement agreement, which focus mostly on use-of-force policies, trainings and accountability systems. And when the department eventually does fulfill the agreement, he will depart.

The City Auditor’s Office theoretically acts as an oversight office for the whole city, but it only has a staff of nine. That means they tend to focus on only a select few issues over the course of a year.

The department’s in-house accountability and disciplinary office, known as the Office of Professional Accountability, employs a civilian director and the city contracts a civilian auditor to provide independent oversight of the office. The auditor, retired judge Anne Levinson, is the closest thing the department has to civilian scrutiny. For years now, she has released lengthy recommendations for improving not only the OPA, but the department as a whole.

But her time is consumed with examining disciplinary investigations, not whether problems with in-car videos are being fixed. And when she does make broader recommendations, they are just those: recommendations. Public officials are free to take them or leave them.

Oversight of broad departmental functionality is minimal, as highlighted by recent head scratching issues inside the department. In 2014, questions of preferential overtime offerings only surfaced when an officer filed a lawsuit and accused the leadership of keeping friends on an overtime “gravy train.” When a recent $500,000 outside audit of the police department’s staffing was delayed into this year, the issue only went public when the Seattle City Council realized they had to make budget decisions without it. And a backlog of rape cases in the department’s sexual assault unit only went public through media disclosures.

Levinson has long advocated for a civilian position with the broad authority to investigate the department as a whole, something akin to an inspector general. If everything goes as planned, accountability legislation could make that a reality this summer.

Anticipating this new position, Mayor Ed Murray recently made a show of thanking Levinson as well as the civilian director of OPA, Pierce Murphy, for their service, inviting them to reapply for the new position. He has said publicly that Levinson and Murphy could continue on an interim basis until the inspector general was solidified.

However, Levinson had already told Murray she would be leaving at the end of June with the expectation he would find someone to fill her position. Murray has argued he doesn’t think that would have made sense because of the uncertain future of oversight. But to those skeptical of even the best laid plans for police reform, it leaves a worrying gap.

Crosscut, with the help of KCTS9’s senior technical producer Joseph Liu, did an analysis of the dropped dash cam footage, and found that, while much of it seems random, there are patterns. Cross-referenced with SPD badge numbers, the data reveals that certain officers appear to lose more footage than others.

SPD has long blamed the issues on a glitch. The data seems to support that: the numbers tend to repeat at oddly specific time frames such as 10.2 seconds or 19.4 seconds.

Occasionally, however, the camera cuts out for longer. Marcus Inouye of the North Precinct, who was recently the subject of a dismissed lawsuit for tightening handcuffs too tightly, lost an hour on June 23, 2014 and again on November 11, 2015.

Sarah Emerson, a police officer out of the North Precinct, had the most instances of dropped footage with 613 since April 2014. If you assume she worked five days a week, that’s more than once a day that some portion of her feed was lost.

The issue seemed to occur most often in the South Precinct. When asked about this, neither Perry nor SPD spokesperson Sean Whitcomb could say why, guessing that perhaps there was one or two faulty cars there. Perry said she would notify relevant parties.

Whitcomb ultimately blames resources, saying that with focus on body cameras and expanding staff, there isn’t the money to buy the infallible system. “I think it’s fair to say that we are doing an admirable job,” he says. “That’s not to say that it’s perfect, but we’re doing the best we can.”

His comments, though, highlight the problem central to police reform advocates: that it is often departments that are the ones calling an issue “fixed.” Were it someone like Anne Levinson saying so, the diagnosis would perhaps carry more weight.