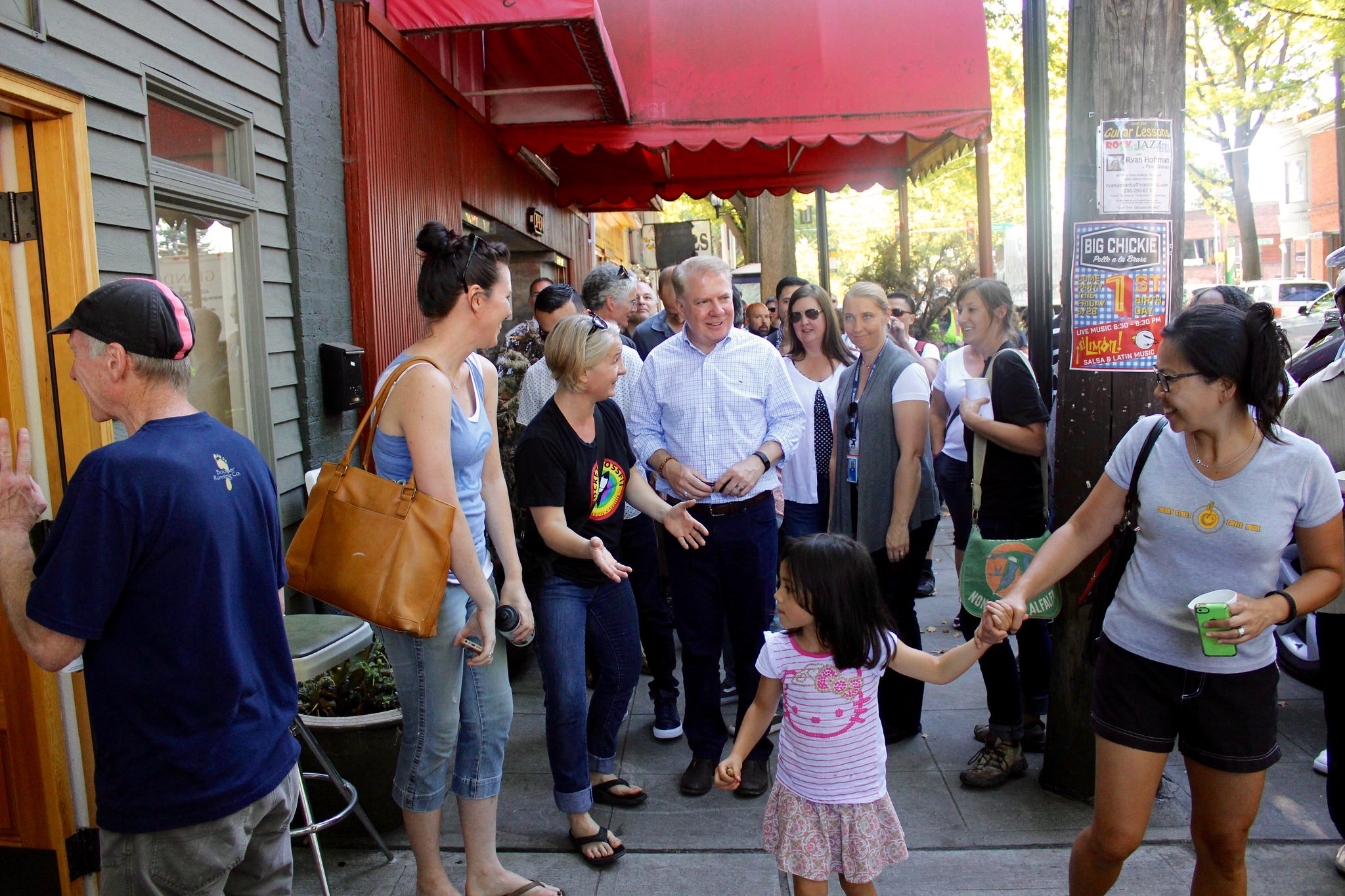 Mayor Ed Murray visits with Hillman City residents on a find-it, fix-it tour to look at improvements the city could make in their neighborhood.

In rolling out a plan to change the way the city interacts with neighborhoods, Seattle Mayor Ed Murray is following up on a concern of some of his predecessors. And he is going quite a bit further than any other mayors in his efforts.

But Murray may have made a mistake he will regret later in making the announcement without doing groundwork with staff and community volunteers and the newly elected district City Councilmembers. And holding a press conference decrying the lack of diversity in city engagement in front of a very white group of aides, community members and city employees doesn’t help. Somewhere there is surely a very unhappy staffer on the 7th Floor of City Hall.

Why did the mayor approach this issue the way he did? Why did he choose a secretive and combative strategy rather than working with the new city councilmembers? It would have been easy for him to make the argument that with the election of seven district-based city councilmembers, the 13 district councils needed to be re-thought and reformed.

In fact, city councilmembers could have taken up the cause and held public forums to discuss the issue and develop a plan with the support of the mayor’s staff. Most activists would welcome the opportunity to take advantage of the governance change — the switch to electing most of the council by district — that 65 percent of the voters supported. So why make it a big fight?

Perhaps only the mayor and Neighborhoods Director Kathy Nyland could answer that question — but in Seattle, operating in such secretive and top down way generally leads to trouble. Also concerning is how the neighborhood coordinators were kept out of the process.  These are city employees with deep ties in the community and should, at the very least, been made part of the solution. They are also union-represented positions and any changes in their job description must be negotiated. Disrespecting them and the work they do by keeping them in the dark ensures that negotiations will be bumpy.

The final head-scratcher from a former staffer point of view: What is the cost-benefit calculation here? Since most people have no idea there are District Councils or a wider City Neighborhood Council, why spend political capital on pulling staff support from the councils and poking people in the eye? Instead of limiting the power of the councils (which is pretty limited anyway) the mayor and Nyland will only end up energizing them. It would be far better to hand this over to the City Council so the mayor can focus on more important things. This whole mess has to go through the council anyway since the system was created by council resolution in 1987.

Perhaps a clue to all of this can be found in the belief that geographic representation is the problem. Many insiders at City Hall fought moving to district elections for the city council. The feeling was that this would empower “NIMBYs” and the older, more conservative single-family homeowners. Some of the same arguments are used in the mayor’s recent press conference. In the FAQ posted by the mayor’s office this point is made:

The very nature of having a structure geared toward geographic areas does not lend itself to fair and equitable representation of other communities that identify around culture, language, issues, needs, or other non-geographical concepts. Achieving fair and equitable outreach to the many diverse communities here in Seattle is a job that no council system, government, or agency can do by itself.

The mayor certainly has a point here. Many groups that associate through interests, cultural identity, and language do indeed gather in different ways than the traditional community or neighborhood council. But a large percentage of voters also said they want more, not less, neighborhood representation when they overwhelmingly passed the district city council system. Councilmembers have added staff giving the increased neighborhood representation as the main reason. It sure seems like there is a great opportunity to build on some of these efforts from the bottom up, through the councilmembers and their outreach to the residents in their districts.

The irony here is that this mayoral Executive Action is a top-down action, criticizing an entire group of people for not being inclusive — while leaving them out of the process. Insulting citizen volunteers, whether you respect them or not, seems gratuitous.

The mayor’s action leaves other questions to sort through. Is the mayor also implying that the Department of Neighborhood's community engagement strategy (they have long been considered the most diverse staff of any department in the city) of the past 15-odd years has been a bust? If so, what about other departments responsible for similar engagement, what have their efforts been like? If the personnel tasked with doing outreach citywide have not been successful, what makes the mayor think that, all of sudden, his administration will be the one to usher in an era of diversity in volunteer civic organizations?

Making a push for reform, especially overdue reform, didn’t need to be this way. There’s an old saying in politics: Friends come and go. Enemies accumulate.